Long Walks on the Beach… 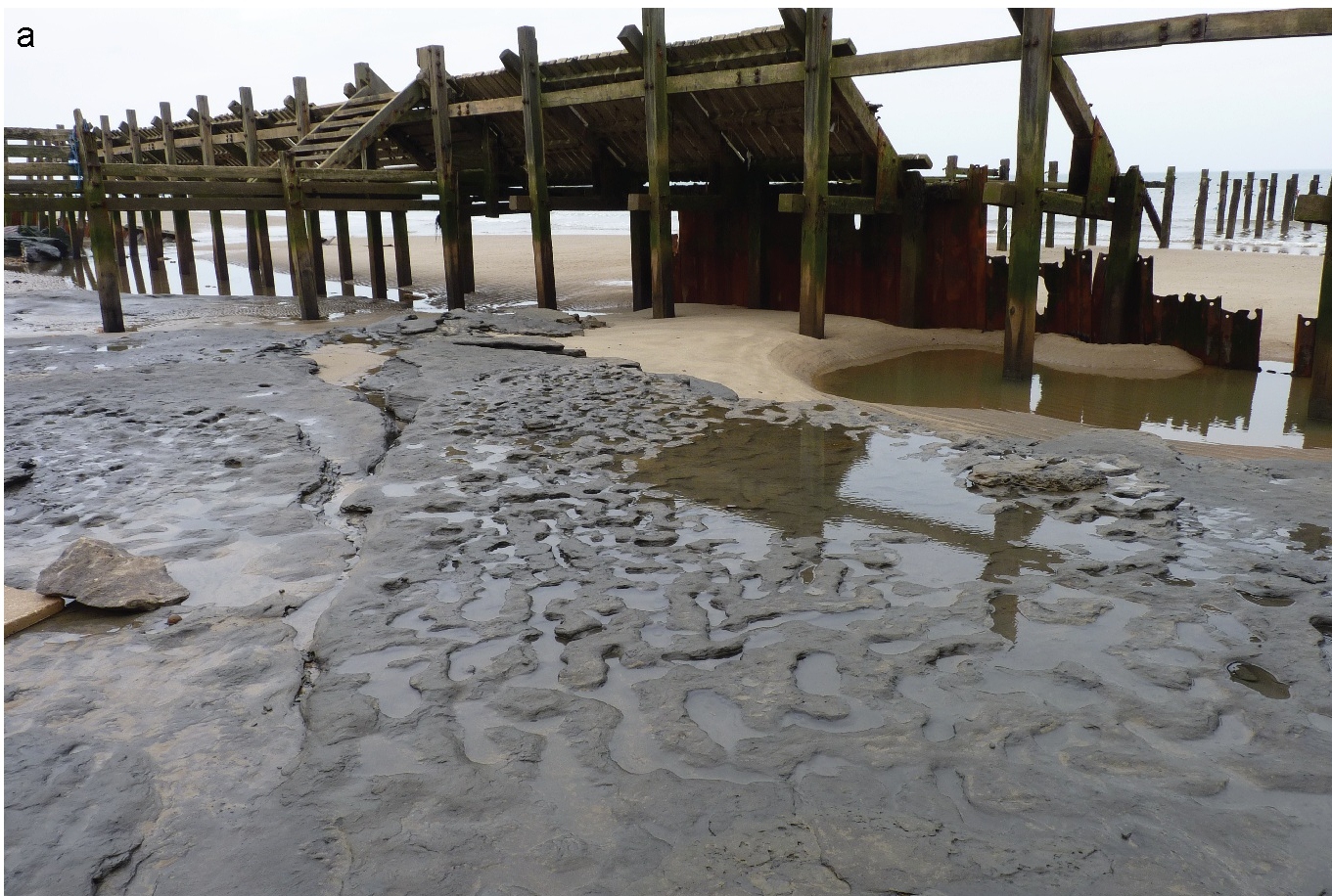 The footprints before they were washed away

As an archaeologist, there are three main thoughts that go through one’s mind whilst digging in Britain:

A) The Indiana Idea: ‘Oh my gosh, what if I find something amazing?’

B) The Practical Panic: ‘Help! I need more time!’

C) The British Gloom: ‘Will it ever stop raining?’

However, there is one dig in Norfolk which has combined all of these emotions to the extreme, and it is one that is leaving prehistorians pretty much gob smacked.

The discovery is not too impressive to look at, but the footprints found on a beach in Happisburgh hold a stunning revelation – they are 800,000 years old. This is older than we are as a species. As such we are unsure as to exactly which member of our complex family tree made them, but a high contender is Homo antecessor, whose remains have been found in southern Europe, but never this far north. However, their occupation would not have been long lived as the next ice age soon descended down to cover the area in a glacier which would have been around a kilometre thick. Their value is even higher when you consider how rare they are. There are only three earlier examples, and these are all in Africa. One of which, the Laetoli footprints, were made by the same species as the world famous Australopithecus Lucy.

To give you some idea about how incredibly old these really are it is thought that Homo antecessor inhabited Europe before their extinction and the arrival of another species, Homo heidelbergensis, who in turn may have evolved into the first Neanderthals who only appeared around 400,000 years ago. We, Homo sapiens, are the relative babies of the family, only starting to appear in Africa around 200,000 years ago. It is no exaggeration to say that these are now one of the most important discoveries ever to be found in Britain as it will change our whole idea of how Europe, and in particular Northen Europe, came to be populated.

Much of our knowledge about Homo antecessor comes from Spain, and in particular, one cave site known as the Gran Dolina which is also dated to around 800,000 years ago. There were butchered bones from animals as varied as pigs to horses, to rhinos and elephants. However, there were also antecessor remains. Here around 25% of the Homo bones show damage similar to that seen on the animal bones – it is one of the signs of cannibalism. Furthermore, the amount of cut marks on the bones indicates that people were being eaten not for ritual, but for food. As such it has been suggested that this site may be evidence for some of the last antecessor’s, who were driven to cannibalism as an alternative source of food, leading ultimately to their extinction.

However, Happisburgh is now becoming the place to be. In 2010 stone tools of approximately the same date were discovered by the same – very lucky – research team. These were the oldest evidence of Homo occupation found in the UK. However, there is some controversy over the dating of these due to possibly disturbed, or mixed up sediments which may confuse the date. Indeed, some of these objections come from individuals in Durham’s department of archaeology. However, it will be interesting to see if these footprints are enough to reinforce the date. Of course, the discovery of the fossilised bones of these people is what everyone is hoping to see next.

Yet this was far from a simple dig, with digging restricted not to a season or two – but a few days. The sea had eroded the sandy beach to such an extent that the foot prints were uncovered in May 2013 during low tide. However, being fairly delicate, the team had to record them before the sea washed the evidence away too. This led to some very dedicated diggers led by Dr. Nick Ashton kneeling on a freezing beach in almost constant rain, attempting to clear the prints which kept filling with water. However, whilst the extraordinary discovery is now no more, they were happily successful in recording the foot prints with a 3D scanner. The results of this has been analysed, and now confirmed to be Homo footprints by Liverpool University. The clearest print had around a size 8 foot, which suggests the individual was around 5ft 9in tall. However, the size of the sample indicates that this was made by a single family group travelling together – not too distant a scene to families walking on a beach today.