Le Bleuet de France and Remembrance Traditions Across the Channel 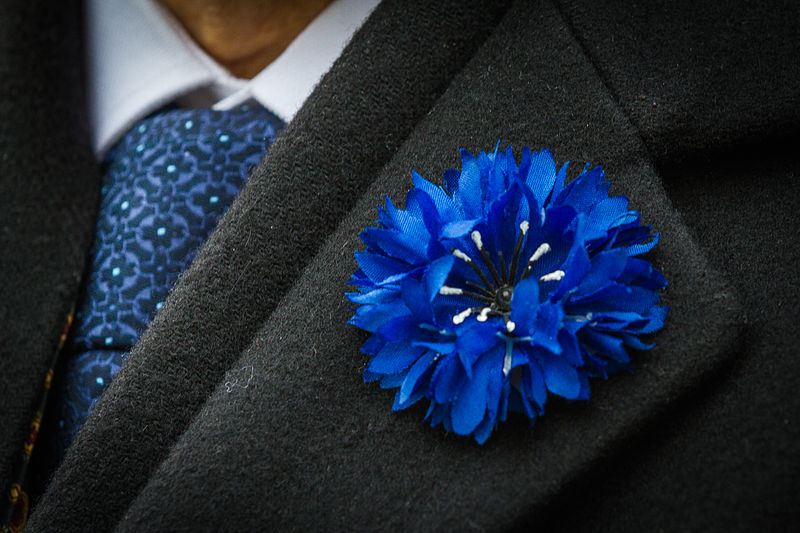 Since I am spending my year abroad in Paris, I assumed that Remembrance Day would pass me by. To my surprise I discovered that a massive memorial service is held annually by the British Legion at Notre Dame Cathedral on Armistice Day. I went along with some friends and found the service to be a little bubble of Britishness held within one of the most iconic French monuments in Paris. While tourists walked by in the aisles, we sang traditional hymns, wore our poppies with pride and watched a parade of flag bearers made up of representatives from different Commonwealth nations as well as children from the local Scout and Guide units. Apart from the magnificent scale of the building, and its location in the very heart of Paris, we could have been in any parish church in Britain. There was even a hearty rendition of God Save the Queen to round it all off (much to the confusion of the streams of tourists all around)!

So, it got me thinking, how do memorial ceremonies differ between Britain and France? Something that really surprised me here was the absence of the poppy, such a prominent symbol of remembrance back home. For some reason I had always imagined that the poppy was a universal tradition, at least for the allied nations. Upon asking one of my professors about this, I was told that the French equivalent is Le Bleuet de France (the cornflower). There are many similarities in the origins of the two symbols. Both were common on First World War battlefields with the poppy a common sight in Flanders and the Somme, while Le Bleuet was more often seen in the East of France. Moreover, just as the tradition of wearing poppies can be traced back to the poem ‘In Flanders Fields’ by John McCrae, Le Bleuet is also featured in a famous French poem, ‘Bleuets de France’, written in 1916, which depicts them as a symbol of hope for French soldiers on the battlefields since they were the same colour as the sky.

The origins of Le Bleuet date back to 1916 and to the work of two French nurses at Les Invalides, a military hospital in Paris. Suzanne Lenhardt and Charlotte Malleterre were moved by the suffering of the war wounded and wanted to give them something active to do during their recovery time. They decided to organise workshops at which wounded servicemen could make cornflower badges out of tissue paper. These badges were then sold to the public and the revenues generated provided the wounded men with a small income. Then, in post-War 1920, Louis Fontenaille, President of an association called Mutilés de France, presented a plan to make Le Bleuet the symbol of all who had died for France. Support of the cause by President Gaston Doumergue in 1928 saw sales rise further, with 128,000 Bleuets sold in 1934.

However, nowadays Le Bleuet is far less popular than its British equivalent – I’ve got to admit that I didn’t see any Parisians wearing one in the run up to Armistice Day. In fact, according to a study by the French newspaper, Le Monde, while poppy sales raised the equivalent of 49.8 million euros in 2013, sales of Le Bleuet came to only 1.1 million euros, a tiny amount by comparison. Nevertheless, Le Bleuet has seen something of a revival in recent years with President Francois Hollande offering his patronage to the campaign by wearing the symbol every year during Armistice Day events, something his predecessor Nicolas Sarkozy never did. Moreover, during the research for this piece I’ve found numerous articles in the French media lamenting the French public for their lack of support for Le Bleuet, many raising the example of the poppy as something to aim for. Perhaps the movement will gain some momentum and begin to rival the British Poppy Appeal for sales.

Apart from the use of Le Bleuet instead of the poppy, there are other differences between British and French traditions of remembrance. Here in France, Armistice Day is a national holiday, whereas in the UK people go to school and work as usual. Perhaps the roots of this difference lie in the French separation between church and state. They don’t mark Remembrance Sunday in the same way as we do, with official commemorations based around church services. Instead, remembrance is very much secular, centring on the Arc de Triomphe in Paris (the French equivalent of London’s Cenotaph) but also around the monuments aux morts present in almost every French village, however small, around the country. The proliferation of these local war memorials points to a key difference between traditions in France and the UK. France lost 1.4 million citizens during the First World War including over a quarter of the 18–27 age group. This equated to over 900 deaths per day and left behind 600,000 widows and one million orphans. Two thirds of French families lost a close relative. This is a far greater toll than in the UK, something that was true during the Second World War as well. As a result, communities are still very mindful of their loss. Many today will still recognise the family names listed on the memorials as the ancestors of friends or acquaintances. These local memorials, then, are a daily reminder of France’s sacrifice during conflict, and they serve as the focal point for local commemorations on Armistice Day too, with parades and ceremonies taking place across France in communities small and big, urban and rural alike.

While remembrance in the UK is concentrated on Armistice Day and Remembrance Sunday in November, it is also traditional in France to commemorate the 8th May, the anniversary of the surrender of Nazi Germany. In 2012, however, President Nicolas Sarkozy passed a law to focus French remembrance onto Armistice Day, marking a not only a celebration of the end of the First World War but also a day of remembrance for all French servicemen lost in all conflicts. Despite this, opponents of the move still fear a loss of significance for the remembrance days of other wars, especially for those who died in Indochina or Algeria. However, it would actually seem that the new law has seen something of a refocus for French remembrance and the rising popularity of Le Bleuet is one result of this. It will be interesting, in the years to come, to see if this symbol of French commemoration can reach anything like the popularity of the British poppy.