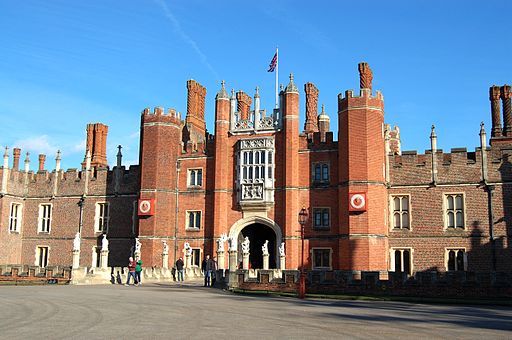 The Tudors are all the rage at the moment. A period studied by every British schoolchild has been reinvigorated by a flood of books, TV shows and films in recent years. From the sex-charged television series, The Tudors, to Philippa Gregory’s bestselling novel, The Other Boleyn Girl, and its film adaptation, the Tudor dynasty has inspired one creative project after another, successfully capturing the imagination of a generation. Packed full of scandal, intrigue and fascinatingly complex personalities, this is an era which never fails to entice. The most recent addition to this Tudor phenomenon has of course been the BBC drama series, Wolf Hall. Based on Hilary Mantel’s already popular novels, Wolf Hall chronicles Thomas Cromwell’s rise to power in the court of Henry VIII. The series received almost unanimously positive reviews from critics (Rotten Tomatoes rated it at 100%) and drew in record-breakingly large BBC Two audiences. So perhaps it is no surprise that a ‘Wolf Hall effect’ is anticipated by Tudor properties across the country. Just as Tim Burton’s Alice in Wonderland helped to quadruple visitors to its filming location at Antony House in Cornwall, the National Trust’s head of filming and locations, Harvey Edgington, hopes to parallel that success this summer: ‘If we get just a small amount of that effect with Wolf Hall we’ll be delighted.’

Hampton Court Palace wasn’t actually a filming location for Wolf Hall, although one wonders why not, given its intimate connection to the people and events depicted. Despite its popular association with Henry VIII, the palace was originally built by his chief advisor, Cardinal Wolsey, who transformed what had been a private courtier’s house into a magnificent bishop’s palace. It was not until 1529 (and Wolsey’s fall from favour) that the King claimed Hampton Court as his own, proceeding to make it even grander and more opulent than before. The palace remained at the forefront of royal events for centuries to come. Anne Boleyn honeymooned there, while Edward VI was born within its walls and christened in its chapel. Henry is said to have wept with joy when he first held his longed-for male heir and had him paraded through the palace to trumpet fanfare. What’s more, it was the site of numerous important occasions even after the Tudor dynasty’s demise. Notably, the Hampton Court Conference in 1604 resulted in the publication of the King James Bible, and Charles I was imprisoned there before his execution in 1649. Given the palace’s continued royal use until Victoria declared it open to visitors in 1838, it is perhaps surprising that the Tudor architecture remains intact. In fact, it is jolly good fortune since, in 1689, William and Mary commissioned Sir Christopher Wren to build a new baroque palace in its place, intended to rival the scale and magnificence of Louis XIV’s Versailles. Thankfully (for fans of the Tudor era at least), they ran out of money after converting only one wing.

Since few Tudor properties are as well-preserved as Hampton Court Palace, and none equally significant historically, it has become an increasingly popular attraction for tourists, the epicentre of a ‘Tudor Boom.’ I joined the hordes on a blazing hot day in early July. My family were part of the Wolf Hall crowd – I for one had become newly fascinated by a period I had considered a perpetual bore at school. There is something amazing about the power of television and film to bring history to life. What had been a plethora of confusing names and seemingly endless lists of dates became an absorbing story of conflicting personalities and agendas. Undoubtedly Wolf Hall is a simplified version of events (it has aroused significant controversy over alleged historical inaccuracy and anti-Catholic bias), but artistic licence must be permitted: no narrative account of the period can claim undisputed accuracy. Historical precision aside, though, Wolf Hall has certainly shown that there’s nothing quite like costume drama for capturing the sense of an era. And if that ignites a passion among budding young historians then who are we to argue?

So, does Hampton Court Palace live up to the hype? Will a visit quench the thirst of Tudor enthusiasts and fans of Wolf Hall? The answer is a resounding yes. Hampton Court Palace is like twenty National Trust properties rolled into one. Exhibits that would be highlights of most tourist attractions are merely side-shows here. Henry VIII’s tennis court, for example, and the stunningly ornate Chapel Royal, or even the Great Vine (the largest grapevine in the world). There’s even a fountain flowing with red wine! The scale of the place is so overwhelming that the key to enjoying a visit is prioritising the areas you most want to see. For me, the Tudor sections of the palace were most alluring, and they did not disappoint. While the architecture of the palace is impressive enough, there is plenty inside to enhance the experience. The audio tour around Henry’s apartments is informative and genuinely engaging, with real historians explaining the historical significance of different rooms, while the live ‘timeplays’ (specially written mini-plays) are an immersive means of recreating the atmosphere of the Tudor court. I was lucky enough to see a re-enactment of a 17th century rehearsal of Shakespeare’s Macbeth, effective mainly in that it made me sit back and take in the sumptuous surroundings of the Great Hall. It is hard to imagine a room more stereotypically Tudor than this with its high, hammer-beamed roof, floor-length tapestries and stags’ heads hung along the walls. I half expected Henry himself to walk in. 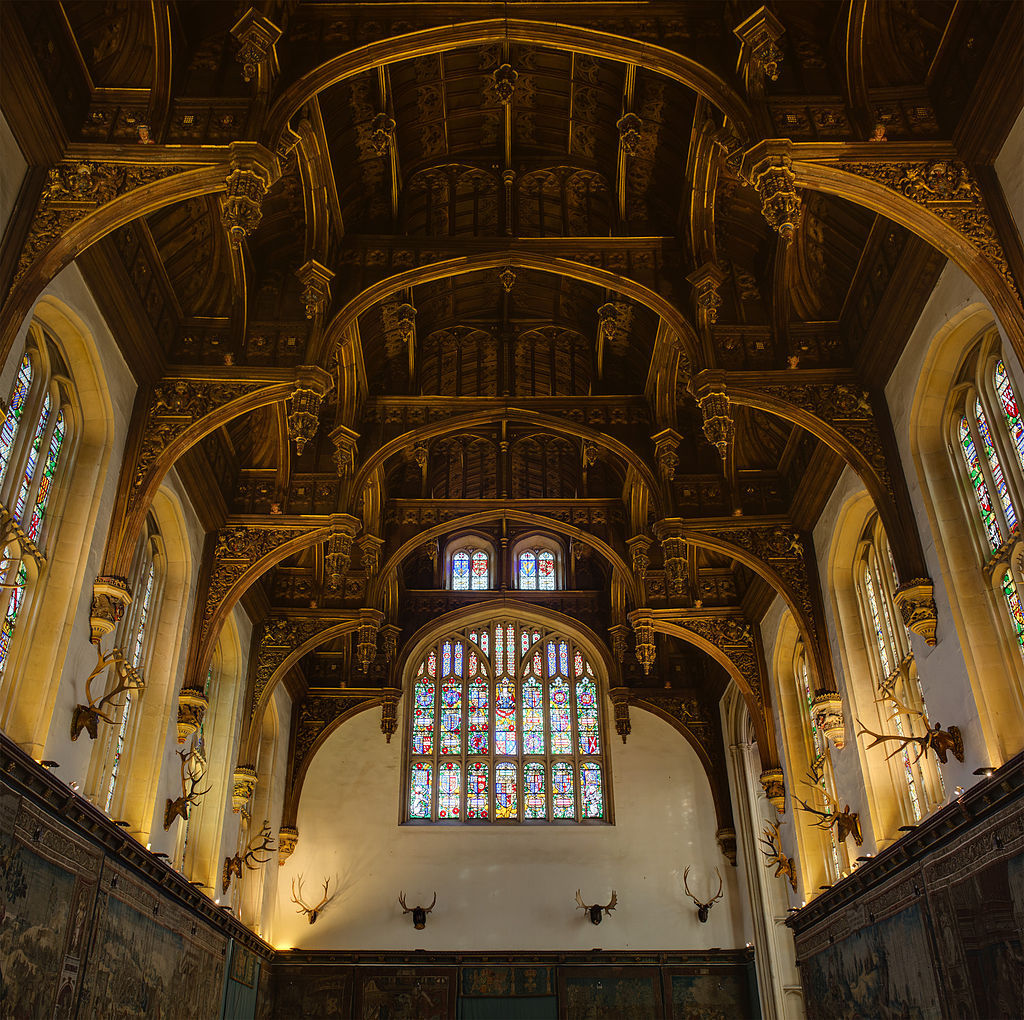 Perhaps what is most impressive about the set-up at Hampton Court Palace is how well it caters for different audiences. For green-fingered visitors, a free guided tour of the gardens is offered daily, explaining their evolution under different monarchs. For those craving in-depth historical knowledge, there is the option of a ‘Royal Beds Tour’ on Wednesdays which gives visitors an opportunity to go behind the scenes to see three fragile royal beds, not usually on display to the public. For children, there is the chance to dress up as courtiers for the day in velvet cloaks. The creative minds behind Hampton Court Palace have made sure it is a fun day out for all the family and yet the historical detail is there in abundance for those who seek it.

Whether or not you’ve been swept along by the Tudor hype recently, I would thoroughly recommend a visit to Hampton Court Palace. It is an attraction which entirely deserves the flood of tourists it will no doubt receive this summer, not only due to its historical importance, but also because of its wonderfully constructed visitor experience. Why not arrive in style by an authentic Tudor route, on a riverboat along the Thames? 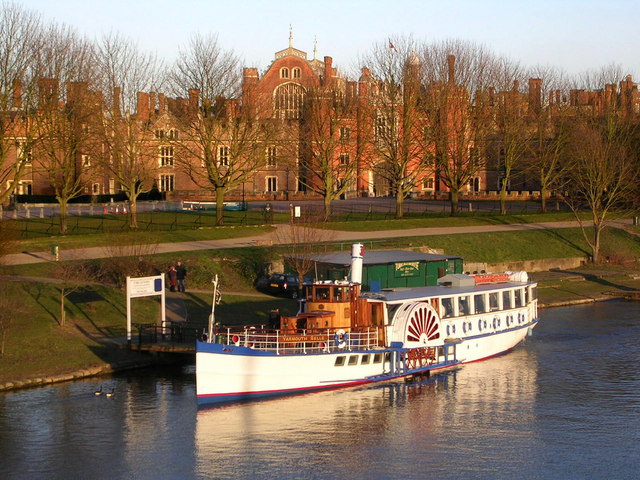 A riverboat at Hampton Court Palace