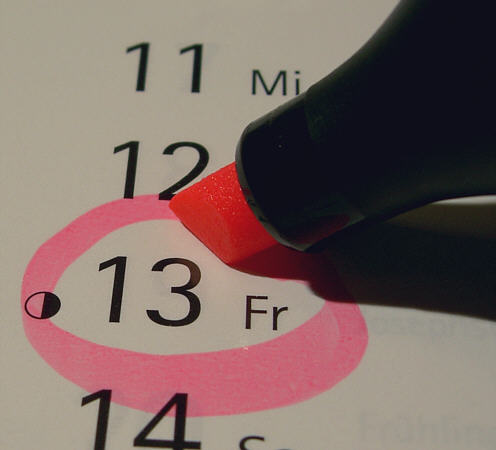 Friday 13th has long been considered an unlucky day in Western culture.

In the eyes of the universe, Friday 13th is just another rotation on the Earth’s axis, and yet Western culture is fixated upon it as an unlucky day. This fascination has generated a cult movie franchise, an official phobia (paraskevidekatriaphobia) and international media reports when a year has an unusual amount of Friday 13ths (I’m looking at you 2015). To celebrate the final Friday 13th of the year, this article will piece together its history to take a better look back at this superstition’s formation, which includes dead Norse gods, a secret American society boasting US presidents as members, and unscrupulous stock brokers.

The combination of the day and the date wasn’t considered unlucky until the 1800s – however, the fear of the number 13 finds its origins in early medieval times with the spread of Christianity. The Bible mentions the story of the last supper and clearly states there were 13 members seated. The 13th member was in fact Judas, the apostle who had betrayed Jesus. To have 13 guests therefore became unpopular, and so the number also gained infamy. This reluctance to have 13 guests is also found in Norse mythology, where the trickster god Loki was the unwanted 13th guest who encouraged one god to murder another. Then, just to stain the number 13 further, witches were associated with it, as it was believed they gathered in groups of 13 to parody the last supper. In a time when people were willing to believe in myths and the supernatural, they didn’t need much more to convince them of the ‘ungodliness’ that was the number 13.

As for Friday, it again finds its unlucky roots in Christianity: Jesus was crucified on a Friday. It was also considered unlucky to start a journey on a Friday (the origins of this belief are anonymous), an idea which was popularized by Chaucer’s The Canterbury Tales (The Nun’s Priest’s Tale, for example). As time wore on, disasters such as the hunting and burning of the Knights Templar in 1307 coincidentally occurred on the ominous combination of Friday 13th, sealing the superstition for those who sought to prove it.

The role of literature in popularizing this superstition continued after Chaucer. During the Romantic era, in an attempt to rebel from the stringent scientific mindset of the Enlightenment, superstitions came back into fashion (along with swooning heroines, gallant heroes and moody poets). To add fuel to the fire, the ironic ‘Thirteen Club’ was set up in the USA in 1881, founded by a Captain William Fowler who had dedicated his life to love of the number 13 (he fought in 13 American Civil War battles, belonged to 13 clubs and always attended important events on the 13th day of each month). The club aimed to demonstrate that the superstition about number 13 was unfounded by conducting an unofficial ‘experiment.’ 13 members would convene on the 13th of every month to do things considered unlucky, ranging from spilling salt to breaking mirrors, and recording how many members died as a result. The club grew in numbers – 400 strong by 1887 – and five US presidents gained honorary membership. However, the club ultimately failed in its aim. Rather than convince people against the idea that the number 13 was unlucky, the Thirteen Club just gave the superstition more publicity.

In the early 20th century, Thomas W. Lawson wrote a book called Friday, the Thirteenth that told the story of a broker who took advantage of the superstition to cause a panic on Wall Street on the titular day. The book sold out immediately and even spawned a full feature film in 1916. Seven decades later, another movie came out capitalizing on the fear of Friday 13th, but this time it didn’t involve suited stock brokers. Instead, it was a slasher film set at a summer camp and featured Jason Voorhees, better known today as Jason from the Friday the 13th movie franchise. Thanks to the this terrifying film, not only is there a reason to fear the day, but it has since been peddled by conspiracy theorists for everything from the Illuminati to the Holy Grail and the Freemasons, and was even used by Dan Brown in his writings.

In the end, the Thirteen club did not lose a member from unnatural causes in its time, quite disproving the mysticism of the superstition. Despite the logical mindset that nothing especially awful should happen on that day, the fear still truly paralyses people – an estimated 19 million people in the USA alone according to a stress management center in North Carolina. A paper in the British Medical Journal in 1993 stated that traffic fell on Friday 13th, suggesting drivers were too cautious to attempt the highway, though it was later revealed as a spoof article for the Christmas special. However, the Dutch statistics insurance department did discover that there were fewer cases of emergency on Friday 13th, so perhaps the fear of the day really affects society? Unfortunately, no serious studies have been completed and let the Thirteen club be an example to you all – ‘unofficial experiments’ don’t really work (they’re usually just an excuse to get together and do stupid things).

I must now admit that I have been erroneous in this article. I had stated that ‘Western culture’ was fixated on the day while, in fact, Italy finds Friday the 17th unlucky since the roman numerals for 17 (XVII) can be rearranged to say ‘I have lived’ (VIXI), and Greece (along with Hispanic cultures) finds Tuesday the 13th unlucky. Furthermore, the Ancient Egyptians had found 13 to be a lucky number!

Scientifically speaking, experts have suggested that 13 sounds like an unpleasant number to us in modern times since, subconsciously, it adds the awkward 1 to the beautiful number 12, as seen in the months in the year or in Chinese zodiac. 13 is also a prime and an odd number, which makes some people feel uneasy about it as opposed to the neat number twelve with its plethora of factors. All in all, I would chalk this day’s reputation up to the fact that humans can be cautious when unsure (it is a survival instinct after all) and, most of all, that humans have always, and will forever, love poking fun at each other. If Halloween’s scares didn’t satisfy the prankster in you, be sure that Friday 13th will provide you with another opportunity to get the reaction you wanted. I, for one, am looking forward to this Friday, mainly because Saturday follows. Have an unlucky day, and don’t forget, T.G.I.F.!