In one of the largest excavations of a bishops house anywhere in Europe the remains of a three-or-four-story tower from a medieval castle have been uncovered by a team of Archaeologists from Durham University. The find is the result of a project undertaken by Durham University’s Archaeology Department, in partnership with archaeologists and volunteers from The Auckland Project, to uncover the secrets beneath the lawns of County Durham’s Auckland Castle.

Amongst the stone foundations the team, supported by Durham University students and volunteers, uncovered the cellar of a large three- or four-story tower which dates from the mid-1300s, and the supports for a bridge and entranceway into a medieval castle from the 1100s.

Professor Chris Gerrard from Durham University’s Department of Archaeology said: “We were delighted to find the striking steps of the tower, which have been remarkably well preserved. We also discovered the walls of the cellar, which includes the remaining of a ceiling, a barrel vault which would have curved over the heads of those standing on the medieval floor beneath.

“We conducted substantial research on the sections found and were able to discover that the tower suffered a series of structural failures when the building had to be repaired due to collapse or subsidence.

“The fascinating thing about Auckland Castle is that, until recent excavations, we didn’t know much about its medieval layout.

“The documentary sources are patchy for this period, and we only begin to find images of the site from the late 1600s. Through this excavation we have gained a huge amount of knowledge about the layout and extent of the medieval complex.”

The tower would have dominated the surrounding countryside and been visible for many miles. It would also have provided the household with a grand view of the landscape across the bishop’s park with its animals, fishponds, woodland, and rivers. 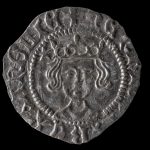 ‘Henry VI silver penny, minted in Durham 1427-30. One face shows the crowned facing bust, the other shows a cross with three pellets in each quarter’ Credit: Alexander Jansen, Department of Archaeology, Durham University

Also discovered was a silver penny dating from the reign of Henry VI, which was minted by the Bishops of Durham between 1427-30. At the time, it would have been worth a gallon of ale or a couple of dozen eggs.

Dr Caroline Smith, an archaeologist working for The Auckland Project, added: “This small coin tells a big story about how important and influential the Bishops of Durham were during the medieval period.

“Most bishops did not have the same powers or freedoms as the Bishops of Durham, who could mint coins, levy armies and hold law courts alongside their religious role.

“The jetton is also an important discovery as it not only tells us that the building was demolished sometime after the date of the coin, but it gives us a tangible connection to the people who would have controlled the acquisition and management of goods and resources at this site.”

The tower and bridge discovered by the team at Durham University and The Auckland Project have since been reburied, in order to preserve their features.

John Castling, Archaeology and Social History Curator at The Auckland Project, adds: “It’s a site that has been welcoming visitors and impacting upon the local community for almost a millennium, and we’ve had hundreds of visitors stop and speak to us about what we’re finding.

“In some ways, it’s a real shame that once we’ve completed the excavation work, we have to rebury them. But we have to balance the desire to show people the Castle’s past alongside preserving the town’s history. Once we’ve gained all the information we can from having these amazing finds exposed, we need to rebury them as if they remain exposed to the elements, the walls could start to collapse.

“We’re working towards being able to display information and objects from these excavations, so visitors will be able to see the results of our discoveries in years to come.”

The excavations conducted by the team this year, form part of a wider project which previously exposed the lost late 13th century chapel of Bishop Bec.

Further work will continue at the site in 2022 with the hope of discovering more monumental finds.