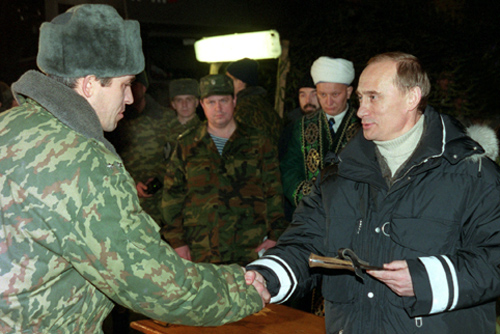 Whilst this appears to be modern day politics, Putin’s actions have their roots in the fall of the Soviet Union

As the diplomatic situation between Ukraine and Russia steadily deteriorates, a real and immediate threat of war looms over the Balkans. Whilst the situation has been aggravated by recent events, it has its roots in the history of modern international politics.

The motives behind Putin’s controversial and mediatised take-over of the southern Ukrainian province remain unclear. Only days after the closing ceremony of the Winter Olympics, the Russian leader has inverted his country’s position on the world stage. Latterly the bearer of the Olympic flame, upholding its associated values of peace and international unity on both the slopes and the ice as a host to the world’s finest winter-sports athletes. Now an impulsive military aggressor condemned almost universally by the international community.

It is important to highlight that the extent of the Russian military presence in Crimea remains uncertain. Some facts are unquestionable: two airports have been taken over, armed personnel vehicles have barricaded roads to seal off Crimea, and the Russian Foreign Ministry admits that Russian armoured units are operating in the region. Do Putin’s actions constitute an outright violation of human rights and Ukrainian sovereignty, or is the situation in Crimea more complex than it appears at first glance?

Firstly, many of the supposed Russian forces are in reality suspected to be Ukrainian pro-Russians, vying for a Russian take-over. Indeed, Crimea is already semi-autonomous, and the majority of its population favours being placed under the rule of the Kremlin. Secondly, the Russian Foreign Minister, Sergei Lavrov, assures that the Russian military presence in Southern Ukraine respects an agreement with Kiev to protect naval bases in the region from growing popular instability.

The apparent legitimacy of the Russian presence in Crimea conflicts with the clandestine image projected by the absence of official markings on the uniforms of the military in the region. Moreover, if the Kremlin is veritably acting to promote stability in neighbouring Ukraine, it has failed to clearly voice the reasons for its rash military decisions to the wider international community, particularly to the UN.

In acting independently, impulsively and self-mindedly to settle the internal turmoil of another state, Russia has ignored, and indeed shown contempt for, the fundamental political structures which exist to respond to such occurrences.

Having emerged from the ashes of the League of Nations after WWII, the UN was specifically designed for the very purpose of settling internal and international conflicts between its member states efficiently and in all due impartiality: perhaps the UN is also partly to blame for failing to prevent Russia’s unexplained “invasion” of Crimea.

The direction in which the crisis will progress in the next few days and weeks will ultimately be revealed when the Kremlin expresses its true intentions in Crimea. It remains to be seen if or when the UN will step up to the plate and do more than threaten sanctions. Until then, a tense and potentially explosive atmosphere remains encased over the Balkans, threatening the stability of the entire region.

The Complex Ukrainian Identity: a Long-Term Factor for Instability?

Understanding Russia’s influence on Ukrainian history, governance and culture is important if we are to gain a broader and more comprehensive outlook on the genesis of current developments in Crimea. This is true both in regards to evidencing the basis of Putin’s claims on southeastern Ukraine and shedding light on Ukrainian popular perception of Putin’s actions.

The concept of a politically unified and independent Ukraine is an extremely recent addition to the international landscape. Born during the collapse of the Soviet Union in 1991, Ukraine had previously never existed as a single coherent autonomous state.

From the fifteenth century to the eighteenth century, Ukraine consisted of a patchwork of self-governing regions with alliances to rival powers. For example the Crimean Khanate, a suzerain territory of the Ottoman Empire in modern day Crimea with a strong sense of self-identity, was ruled by the descendants of Genghis Khan from 1449 to 1783, with a longstanding enmity for the Russian Tsardom. On the other hand the Zaporozhian Cossacks, who ruled over most of mainland Ukraine from 1492 to 1775, were aligned with Russia against the Ottomans. Furthermore, Polish control over Eastern Ukraine added to the administrative fragmentation of the region.

Pitted against Russia during the Russo-Turkish wars of 1735–39 and 1768–74, the Khanate was ultimately annexed by Tsar Catherine II in 1783, following decisive Russian victories. With its strategic need for a loyal southern buffer against the Ottoman Empire and its allies having disappeared, Russia destroyed the Sich, a Zaporozhian stronghold, and attacked the Cossacks after having fought alongside them in the Russo-Turkish war, annexing their territories in 1775. Therefore, Russia can be viewed as responsible for bringing together the territories which would eventually coalesce into contemporary Ukraine.

The ethnic and cultural diversity of these regions has made it difficult to construct a common basis for national identity in Ukraine. One major part of its shared cultural heritage has of course been provided by the historical influence exerted by Russia over the entire area, which transcends many individual differences. In the eyes of Russia, the Treaty of Pereyaslav signed in 1654, which granted the Tsardom suzerainty over the Cossacks, symbolises a long-term pledge to protect all Slavic nations, acting as a means of justifying Russia’s pan-Slavic involvement in the affairs of its neighbouring countries through their cultural similarities. The symbolically significant contribution of Kuban Cossacks, the descendants of Zaporozhians, to Russian national security as part of the Presidential Regiment in the special unit dedicated to protecting high officials in the Kremlin, highlights Russia’s desire to portray strong cultural ties with Ukraine, in order to further legitimise its involvement in its domestic affairs.

In reality, Ukrainian attitudes are far from uniformly supportive of integration with Russia, but the lack of cohesion between Ukraine’s different cultural groups, combined with political corruption and limited freedom of speech, made it difficult for Ukraine to affirm its autonomy to the Soviet superpower. Only very recently, during the revolution which started in November 2013, did the Ukrainian population decisively rise against corrupt President Yanukovych in a coordinated movement, to actively encourage the diversification of Ukraine’s economic and diplomatic relations away from Russia, and to promote human rights.

Yanukovych was removed from power in late February after attempting to pass Bondarenko-Oliynyk anti-protest laws to restrict freedom of assembly and expression in Ukraine, in an attempt to curb popular unrest which had been ignited by his rejection of Association and Free Trade Agreements with the EU in November 2013 to promote closer economic ties with Russia.

The removal of the pro-Russian Yanukovych from power has exacerbated existing tensions between Ukraine and Russia. Since Ukrainian independence in 1991, Crimea has been a major focal point for disaccord. Given to Ukraine at the collapse of the Soviet Union, the Autonomous Republic of Crimea (a parliamentary republic within Ukraine) has continued to serve as a historic strategic Russian military base in the Mediterranean, promoting instability in the region, with numerous cases of reported infringements of bilateral agreements by the Russian military. Yanukovych’s polemical 25 year extension of Russia’s lease on the port of Sevastopol (now Russia’s until 2042) in exchange for a contract on discounted natural gas provisions in 2010 reinforced tensions, buttressing Russia’s military presence in Crimea, and correspondingly eroding Ukraine’s partial sovereignty over the region. Therefore, where do the people of Crimea stand in relation to Russian integration?

In the last few weeks, Russia has been able to capitalise on longstanding pro-Russian feeling in Crimea, combined with civil unrest in mainland Ukraine, to extent its control over the region. Crimean attempts at integration with Russia began as early as 1995 under Yuriy Meshkov, then President of Crimea (a position abolished the same year). Since then, a number of factors have allowed for continued and growing support for separation from Ukraine among the Crimean population, not least of which is the demographic structure of Crimea itself, comprising a 60% proportion of Russians. Other motivations for Russian integration include Ukraine’s volatile economy, governmental corruption, limited human rights and the instability brought about by the recent “Euromaidan” revolution. We could also ask whether Crimea’s historically strong sense of self-identity places it at odds with the Euromaidan movement, favourable to European integration, a perceived by-product of which is the erosion of national sovereignty.

The Demise of Putin?

It is not just Crimea which fears the repercussions of Ukraine’s greater involvement with Western Europe. A Free Trade Agreement between Ukraine and the EU would negatively impact Russia’s balance of trade, an obvious disadvantage to the superpower’s economy. However, Euromaidan presents a more detrimental and extensive threat to Russian politics and ideology. In order to benefit from a more involved economic relationship with the EU, Ukraine will undoubtedly be required to implement anti-corruption transparency measures, along with developing human rights, creating civil unrest in Russia as its own population demands similar reforms.

Therefore, Putin did not invade Crimea with the simple objective of conquering Ukrainian territory, but as a show of strength to manipulate Ukrainian politics. By using propaganda to demonise the new pro-European Ukrainian government, portraying it as fascist and anti-Russian, combined with the presence of a strong Russian military force inside the Ukrainian border, Putin aims to strong-arm Ukraine into returning the deposed pro-Russian president Yanukovych to power. Putin thereby aims to prevent a larger structural shift in Ukrainian politics, foreign policy and domestic policy as a whole, and thereby ensure the stability of his own rule.

Putin’s invasion of Crimea could also be interpreted as a means of mobilising a patriotic upsurge in Russia over his self-alleged protection of the established order in Ukraine, a calculated strategy to regain popularity and support amidst the Russian population.

This is history in the making, and in looking to what will happen in the next few weeks we should therefore pose these questions: will Putin’s actions cement his position in Russia, or on the contrary highlight his neglect for basic international principles of territorial sovereignty and human rights, corroding his already weakening popular support? By invading Crimea, did Putin inadvertently set in inexorable and irreversible motion his own political demise – both on the international and domestic landscapes?