Covid and the Earthquake

‘Unprecedented’. My working theory is that there’s some kind of high-stakes bet going on between government ministers over who can say it most. There’s probably a giant roulette wheel strapped to the table of the Cabinet meeting room; each time a minister says ‘unprecedented’ they get a free spin. Winner gets a vaccination.

If this article were a video clip, I’d probably cut to a badly-edited, autotuned mix of Johnson, Gove and Hancock repeating ‘unprecedented’ at various Downing Street briefings at this point, but this isn’t a video clip so I can’t. You’ll just have to believe me – they’ve said it a lot.

Covid-19, of course, poses a vast national and international challenge. But is the current crisis really an ‘unprecedented’ one?

As a virus that has spread across the modern world, wreaked havoc across the global economy and triggered countless lockdowns (seemingly in Britain alone), yes, Covid-19 is fairly unique. But amongst crises that have claimed lives, inflicted economic damage and forced radical fiscal measures to counteract the damage done, the current pandemic is hardly unprecedented.

Take the Lisbon earthquake of 1755. Yes, one’s a virus spreading now and the other’s an obscure 18th century natural disaster, but some of the parallels between the two are genuinely striking.

“No words can convey an Idea of that Scene of Horror and Confusion to which I was now Witness … Houses, Churches, Convents, Palaces composed one undistinguished Heap of Ruins”.

This is how Richard Goddard, the vicar of Wiltshire, later described the events of November the first, 1755. According to Goddard, the earthquake was, initially, like ‘the noise of several coaches’ and caused ‘a trembling of earth not greatly unlike what is felt in such an occasion’. 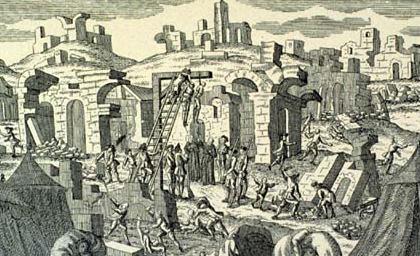 Then, as Goddard wrote, ‘the shock returned with such an increase in violence [that it] seemed to threaten everything with inevitable destruction’. This ‘inevitable destruction’ was further increased by the unfortunate fact that the Lisbon earthquake occurred on All Saints’ Day. City-wide celebrations meant that crowds were packed into Lisbon’s Churches and wax candles burned in every chapel. As a priest recollected, ‘a large number of the clergy were engaged in the choirs’ while ‘many were on the altar celebrating the sacred sacrifice of the mass or handing out the Eucharist’.

It was these wax candles that fell when the Churches collapsed and sparked a firestorm. Listing the Churches that were ‘completely destroyed’, according to one chronicle, would essentially take up the rest of this article’s word limit. At Santo Domingos, it was reported that a single candle fell and ignited a curtain, from which the flames spread to ‘pulpit, church and monastery’. Estimated death tolls of the Lisbon earthquake in the city alone range from 10,000 to 100,000.

So far, not much in common with Covid-19. Where the virus and the Lisbon earthquake really overlap is in the economic measures deployed in response. After the earthquake, Carvalho e Melo (the first Marquis of Portugal) aimed to ensure good supply and affordability of essentials: on the 10th of November 1755, he introduced price controls on all goods in order to prevent ‘bakers, shopkeepers, craftsmen and businessmen … impiously abusing the disaster’. Had the Competition and Markets Authority Chief Executive incorporated the word ‘impiously’  into her statement when she recently urged ‘retailers to … not to make misleading claims or charge vastly inflated prices’, it would probably be a case of plagiarism.

Back to the earthquake, another measure Carvalho e Melo attempted was when he declared on the 10th of November 1755 that all imported goods would be admitted tax free for the rest of the month. This was a policy which ‘undoubtedly helped Lisbon’s inhabitants by increasing the supply’ of goods, especially resources of food according to the historian Mark Molesky. The same policy of relaxing import duties was used last year, when until the end of December duties were removed on hand hygiene and cleaning products as well as medical equipment.

So is 18th century Portugal a sort of crystal ball that cabinet members can look into in order to discover exactly what will happen next? Probably not. But that doesn’t mean we can’t learn anything from the earthquake at all. By dressing up Covid-19 as an ‘unprecedented’ crisis, past pandemics and economic policies are left ignored. While ‘unprecedented’ may be a good buzzword for ministers to use in Downing Street briefings, it shouldn’t prevent examination of the past, such as examination of the Lisbon earthquake of 1755.