Covid-19 has, at time of writing, killed more than 399,000 people globally; over 36,000 of those came from the United Kingdom. Everyone is desperate to recover some semblance of normality, whether it be in an attempt to revive the economy, to get children back in schools, or to get the pubs to re-open (please let that be soon). However, history teaches us that we must not be hasty in trying to get back to normal; if we are not careful, we will leave ourselves open to a second wave which could prove even more devastating than the first. We merely need to look back 100 years to see just how important it is to realise the true gravity of today’s global pandemic.

A line oft cited by politicians is that these are “unprecedented times”. I’m sure that the fact that this is simply untrue is a huge shock to many of you, given the calibre of the current cabinet. If we look back to the end of World War One, we can see the Spanish Flu gives us a clear lens through which we can assess the current pandemic. Of course, Spanish Flu was much more deadly than the current pandemic, killing anywhere from an estimated 17 million up to potentially 100 million, but there are still comparisons to be made. 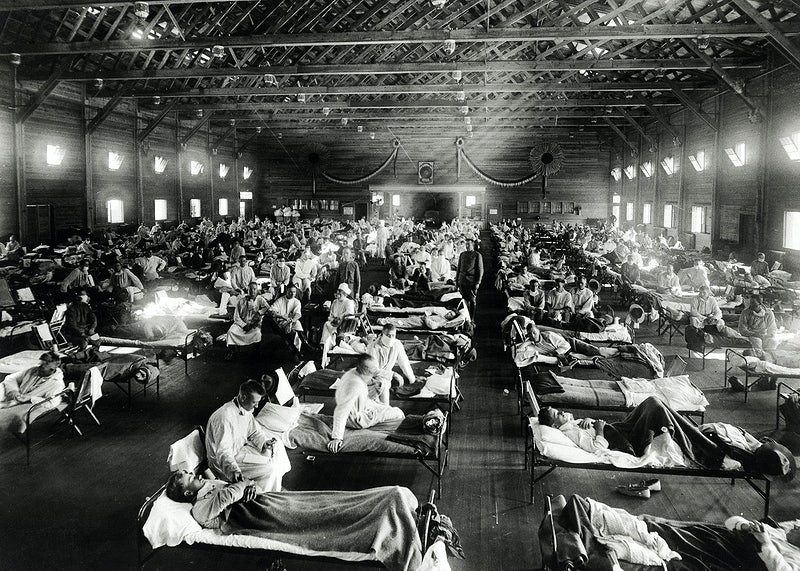 A hospital for Spanish Flu sufferers in Kansas (Image from Rawpixel)

There was speculation about where the virus began, although it is likely that army barracks full of soldiers weakened by warfare were hotbeds for transmission, with soldiers returning from Europe bringing back both victory on the continent and a deadly virus. It is wrongly assumed that this strain of influenza originated in Spain, however it was only named ‘Spanish Flu’ because of the lack of censorship on Spanish press, allowing them to openly discuss this new disease; British news was doctored by the government as to keep morale high during wartime and to reduce criticism on the government, good to see we’ve come a long way since then…

The most concerning thing about Spanish Flu, from a modern perspective at least, is the fact that there was not only a second wave, but also a third and fourth; not until 1920 was the disease finally eradicated. The second wave was significantly more deadly than the first, with 195,000 Americans dying in October 1918; this sounds like a much smaller number than may be expected, but the fact that the USA only suffered 53,000 deaths due to combat throughout the First World War puts this number into sharp perspective.

Why was this second wave so much more deadly? Well, partly it was for fear of crippling both the war effort and the economy. British government official, Arthur Newsholme, refused to impose quarantine because he did not want to have to close munitions factories. This would have been catastrophic for the war effort, but also for the economy, and so quarantine was not imposed until it was too late; governmental tardiness caused deaths then just as it has now.

Another problem was a lack of available nurses. Many were, of course, helping wounded soldiers both at home and overseas, but there was also a level of discrimination which persisted, thus worsening the personnel shortage. In the USA, the American Red Cross refused to allow African American nurses to help until the pandemic had reached its peak. This was a time in American history where de jure segregation was still in its prime, and racism was apparent in all areas of American life; President Woodrow Wilson’s presidency was riddled with racist remarks and actions which trickled down into the life of the ‘everyday’ American.

Whilst the racism of the time may not be directly relevant to today’s society, it is also not too alien a concept, with anti-Asian hate crimes increasing by 21% since the beginning of the pandemic. Not only this, but it is no secret that successive British governments have underfunded the NHS, resulting in a lack of nurses similar to that which occurred during the Spanish Flu contagion.

The recent introduction of a new UK immigration bill, which has passed through the Commons, declared that immigrant workers are more likely to be allowed into the country if they earn over £25,600 per annum; anything less than that and foreign nationals are classed as ‘unskilled’ workers. This implies that anyone earning less than this is an unskilled worker; the average nurse’s salary in the UK is £24,864 and newly-qualified teachers outside London earn on average £24,373. Clearly, we are yet to learn from the mistakes made in the fight against Spanish Flu; the unjust treatment of poorly-paid key workers, many of whom are ethnic minorities, will only worsen the situation we find ourselves in.

A positive lesson that we can learn from the Spanish Flu, is that it came to an end. Life did return to normal; people were allowed to see their friends and family for more than just an hour in a park, children could return to school, but most importantly people could finally go to the pub again! Whilst it was by no means easy, people persevered and made it through.

We must be sure not to ignore the lessons of the past and come out of this lockdown to quickly. Adherence to guidelines and people taking individual responsibility is the real way to bring this pandemic to an end. It is a problem for all of us to consider, not just those who are most at risk. We do not live in “unprecedented times”. We live in worrying and scary times, for sure, but we will overcome it just as previous generations overcame their obstacles.