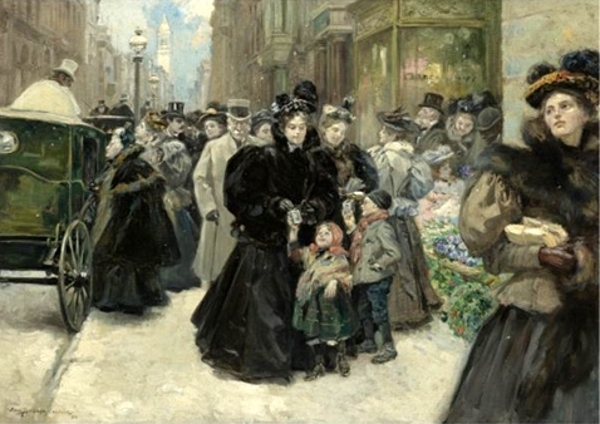 ’Tis the season for mirth, merriment and of course, major advertising campaigns. If you happened to shed a tear at John Lewis’ latest Christmas offering, you’ll be aware of the powerful, persuasive nature of good advertising. However, Christmas hasn’t always been a consumer’s holiday. The commercialisation of Christmas first gathered pace in Britain during the Victorian era. Ever since, Christmas advertising has become an essential tool in encouraging people to part with their hard-earned cash during the winter months. In this brief history of Christmas advertising we’ll be looking at some of the world’s best loved brands, from Coca-Cola to Oxo, and assessing their contributions to the development of Christmas marketing. So saddle up your reindeer for a whistle-stop sleigh ride of the history of the consumer’s Christmas.

Christmas, as a commercial holiday, was invented by the Victorians. Victorian Britain was a nation of industry, founded on capitalism and an entrepreneurial spirit. It is therefore unsurprising that they chose to exploit the festive season for money-making purposes. One of the earliest methods of Christmas advertising for shops and businesses was the use of eye catching window displays. By combining products with whimsical festive scenes, including tableaus and snowscapes, shops were able to entice potential customers inside. Big department stores, such as Macy’s in New York and Selfridges in London, were the masters of Christmas window dressing, making every effort to try and outshine their competitors. Creativity and innovation were at the heart of these shop windows. As a result their unveiling became an event in itself, with crowds gathering to take a peek at the displays. For better or for worse the Victorians also invented the concept of frenzied Christmas shopping, with Gordon Selfridge himself coining the ‘Christmas Countdown’ idea. Moreover the first known ‘Santa’s Grotto’ was seen in 1888 in a shop in West Ham. Victorians used methods such as these to create a real buzz around their shops, through which they could advertise to the masses.

Across the pond, a certain fizzy drink played a big role in the development of Christmas advertising. You may already be aware that the Coca-Cola brand is inextricably linked to Christmas marketing and modern Christmas as we know it. We all recognise the iconic image of Father Christmas, a fat, jolly fellow with a red suit and a white beard. Interestingly, this traditional image has been heavily shaped by Coca-Cola’s Christmas advertising, which has helped to outline Santa’s appearance and character. In 1931 the illustrator Harold Sundblom was commissioned to create the image of Santa Claus for Coca-Cola to use in their advertising campaigns. Sundblom supposedly drew inspiration from the American poem ‘A Visit from St. Nicholas’ written by Clement Clarke Moore in 1823, now more commonly known as ‘Twas the Night before Christmas’. Sundblom didn’t only provide the blueprint for Santa’s image, he also helped to cultivate a personality for him, with early images portraying him as a cheerful and friendly character. This depiction of his temperament has persisted, with Father Christmas typically being viewed as a jovial fellow. Coca-Cola’s creation of the iconic Santa image was originally designed to boost their winter sales, however the adverts had a far greater impact than could ever have been anticipated, by creating a Christmas icon. 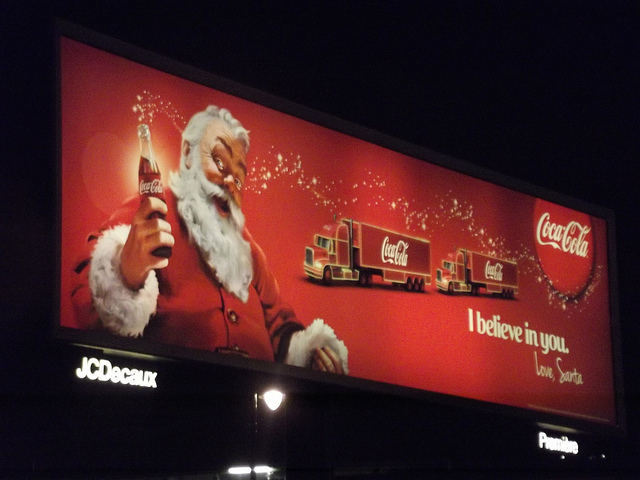 Another pioneering moment in the history of branding and marketing was the first British television advert, released in 1955. Moving pictures allowed brands to develop more complex storylines, as well as creating characters that the viewer could relate to. These relatable characters can be seen in the much-loved Oxo Christmas adverts which ran from 1983 to 1999. This advertising campaign featured the ‘Oxo family’, designed to represent the archetypal British family on Christmas day. Adverts such as these managed to balance tongue in cheek comedy with a relatable situation for the audience, alongside marketing the product. The well-known Yellow Pages advert from 1992 also relied on light comedy. It featured a boy attempting to kiss a girl under the mistletoe, but being forced to stand on a copy of the Yellow Pages in order to reach her! Adverts from the 1970’s and 1980’s often featured a celebrity cast to promote the brand. Woolworths employed a ‘pick and mix’ of famous faces, featuring those such as Bill Oddie, Chris Tarrant and Daley Thompson over the years. Undeniably during this period, Christmas TV adverts were centred on fun and comedy. They may not have had the slick production quality that we are accustomed to today, but they had Christmas spirit in bucket loads.

In more recent years Christmas advertising has become a phenomena in itself. Rather than simply persuading viewers to buy their products, Christmas television adverts seem to signal the start of the Christmas season. You may have noticed the recent inclination for tear-jerking adverts, a trend started by John Lewis’ iconic 2011 advert ‘The Long Wait’. This advert depicted a young boy impatiently waiting for the moment when he could give his parents their Christmas present. John Lewis’ tactic to try and pull at our heartstrings is still under seasonal employment, as seen with this year’s offering, ‘Man on the Moon’. While emotional value has long been at the heart of John Lewis’ Christmas advertising, their rivals M&S have tended to produce more glamorous, polished productions. This year’s ‘The Art of Christmas’ campaign is no different for M&S. It is believed that in the future Christmas advertisers will need to improve their online marketing, as well as their social media presence. Just as advertisers were forced to adapt for the television screen, today’s marketing gurus will need to do the same for our computers, laptops and smartphones. 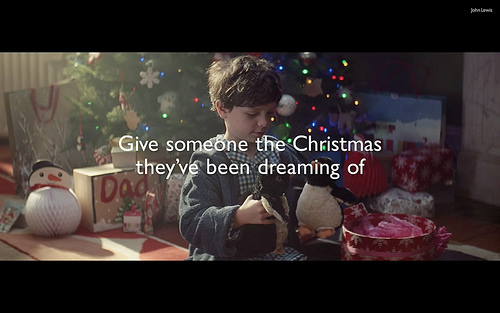 A screenshot from the 2014 John Lewis Christmas television advert

Ever since the Victorians began using shop windows as a means to market Christmas, the commercialisation of the holiday has never ceased. From Coca-Cola’s invention of the iconic Santa image, to the reliance on heart-wrenching television adverts in more recent years, Christmas advertising has always attempted to innovate and interest. It remains to be seen how advertisers will continue to peak the consumer’s interest in future years, when the playground of advertising will move online. Despite this, it is certain that Christmas will remain the season for consumption. So whether you adore the festive period or are a veritable Scrooge, it is a universal truth that the commercial Christmas is here to stay.