Ottoline Spearman in History on 7 February, 2015. 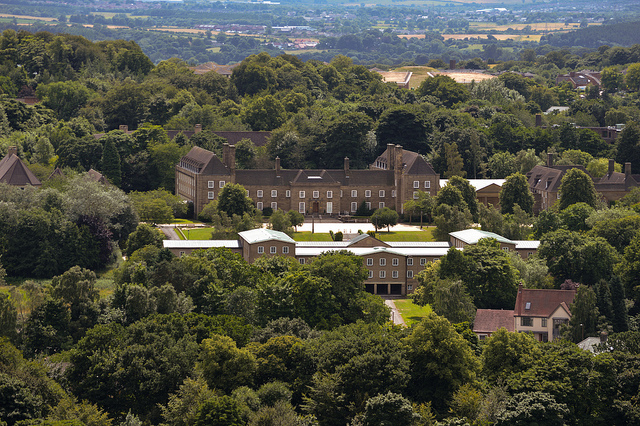 Driving up South Road, the last thing you expect to see is a sign for ‘Teikyo University of Japan’. But, unbeknownst to the passerby, this sign also shows the way to Durham’s third oldest college. St Mary’s College was built in 1899, following the arrival of the first female students in Durham in 1896. At first, these women were lodged with friends ‘approved by Senate’, before, in February 1899, a Women’s Hostel was offered at 33 Claypath. Miss Laura M. Roberts was appointed as Principal that year, and six students were admitted. Elizabeth Robinson was appointed after Miss Roberts resigned, and the students were moved to Abbey House, which then functioned as their new home. The Hostel remained at Abbey House from 1901 to 1920, thus spanning the duration of the First World War. During this time, the building became overwhelmed with new arrivals, and the women came to play a more prominent role in University life as the men were at war. In its twenty-first year as a hostel, it was given the status of ‘College’, dedicated to St Mary. Given the need for larger accommodation, the College moved to the Chorister School. However, it was soon evident that yet more space was needed, and the University Council looked into this. By 1939, £115,000 had been pledged, but the majority went instead to King’s College London.

The Second World War brought with it heavy rationing, and members of the college spent much of their time volunteering for the war effort. In addition, the war saw the appointment of a new Principal, a Miss Fergusson. By the end of the war, the numbers of students had risen to 80, but accommodation was still limited, with over 400 applying for just 27 places. Thus, deservedly, permission to build a new College building was granted.

The foundation stone was laid by Princess Elizabeth in 1947 and by 1952 the building, which could house up to 100 students, had been completed. It was in this year that Miss Fergusson resigned, to be replaced by a Miss Williamson. A new building, named after her, was completed in 1962, designed specifically to prevent an obscured view of the cathedral.

In the Michaelmas term of 2005, a decision was made to allow male students into the college. This was followed by the appointment of the first male Principal, Professor Philip Gilmartin, in 2007, and the first male JCR President, James Liddell, in 2009. The integration has run smoothly, and today there is a 50/50 male to female ratio. The Principal who runs the College today is Simon Hackett, appointed in 2011.

Mary’s alumni first met in 1904 and still produce an annual newsletter. Members of the alumni today include the politicians Jenny Williot and Jane Griffiths, as well as Jamie Atkinson, the Hong Kong Cricket Captain.

St Mary’s is one of the colleges that still continues the tradition of wearing gowns, which are required at JCR meetings and formals. As well as formals, which happen two to three times a term, Mary’s hosts an Informal Ball, a Masquerade Ball and a Midsummer Ball, which tend to be great successes. These social events all contribute to enhancing Mary’s reputation as the ‘friendliest college’, as epitomised by the college slogan: ‘Mary’s be the best’.