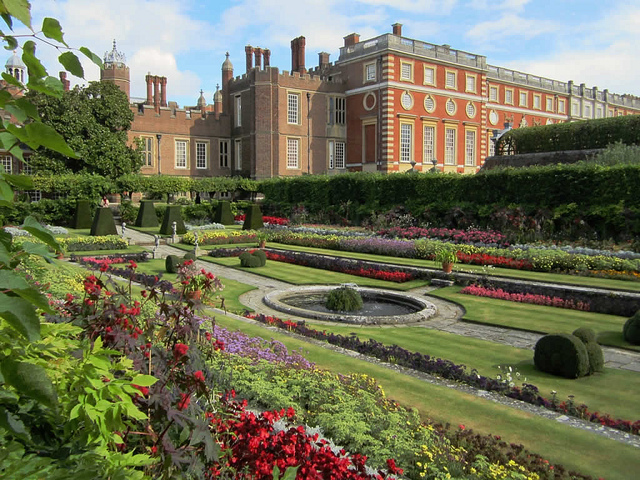 Saturday Night on BBC1: The Voice. Meh. Over on BBC2: Britain’s Tudor Treasure: A Night at Hampton Court. Much more exciting! Presented by the recurrently provocative historian, David Starkey (you’ll have seen him thoroughly pissing off George Galloway on Question Time) and the ever-adorable Lucy Worsley, chief curator of Historic Royal Palaces, this documentary celebrated the 500th anniversary of Hampton Court Palace.

The premise of the programme was a reconstruction of Edward VI’s baptism. Culminating in a reenactment of the procession, David and Lucy first brought us through the history of Hampton court and its inhabitants. Not least because of the Horrible Histories song, the saga of Henry VIII and his six wives is one unknown by few, so it was recounted but told through the perspective of the Hampton courtiers. By bringing the viewers into the chambers and galleries of the palace, David and Lucy brought Hampton Court to life. Whilst Jane Seymour’s pregnancy was (thankfully) not performed, it was made stark, with the CGI imposed curtains veiling the prodigal mother in darkness for nine months.

The culmination of the show was the procession, involving ninety present day staff at the palace dressed and ordained as their contemporary counterparts. Although mistaken by even Starkey for the great king, Northumberland’s costume was detailed and ornate, the product of historical costumers’ endeavors. Despite her later historiographical reputation, the real starlet was Lady Mary. Dressed in red and pearls, “Bloody” was wholly replaced and negated by her ‘Bling’.

The participation of modern staff was both instructive and interesting. Whilst clearly passionate about their careers, acting served as a surprising forte for them, not allowed to express any inkling of surprise or wonder upon their entry to the chapel, to try and capture the everyday normality that was such a spectacle for the Tudors. Worsley paid due to her colleagues and really gave an insight into the multi -faceted roles of the modern day palace, from the restoring builders to the archive collectors. Her office and its repletion with artifacts was enough to make even the physicists among us want to work for HRP.

Unlike many prime time historical documentaries, the history was not lost sight of (looking at you, Christine Bleakley, presenting Roman Britain From the Air!). Clearly this is not surprising considering the esteemed presenters, but it did emphasise that the whole venture was possible only because of the detail with which the heralds recorded the proceedings in 1537. Although for the aid of their successors rather than for this modern re-enactment, the fact that the latter could have been the case just shows how demanding life at the Tudor court was.

David Starkey has frequently been described as popularising, trivialising, vulgarising, ruining, and making crass Tudor history. This is precisely why I am a fan. He has famously feuded with Lucy and many reviews have consequently focused on their amiability. Whilst they may not be the next Ant and Dec, their passion was clear, their combined expertise remarkable. More than anything, they were both clearly proud and excited to be a part of the event. The only thing missing was for Daivd Starkey to dress up too, though perhaps he was imitating the role of Henry VIII, absented from the procession to ensure focus on the young prince. This ‘Night at Hampton Court’ was nothing short of a brilliant documentary; fascinating to the casual historian, exciting for the academic too. Watch it because David Starkey is far effortlessly cooler than will.i.am. Catch up because it gave an insight into the trials and tribulations of the sixteenth century, which really ‘court’ the essence of Tudor life. Above all, watch it because history really is more interesting than ‘The Voice’.