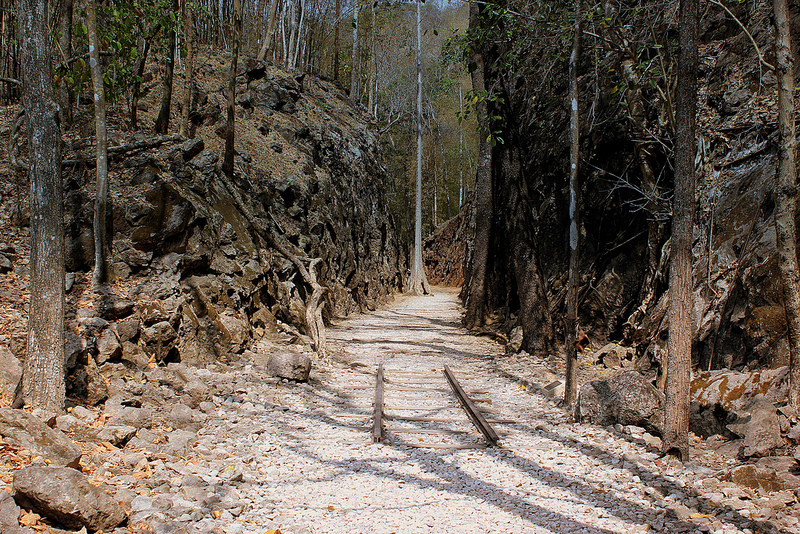 The notorious Hellfire Pass of the Thai-Burma Railway.

I made the conscious decision not to go and see Twelve Years a Slave at the cinema, being fully in the knowledge that I wouldn’t be able to hack the scenes of rape, hanging and emotional torture. So after having watched the somewhat misleadingly romantic trailer for The Railway Man, I suggested watching it with my friends on a spontaneous cinema trip. Little did I know what we were in for. This is a fantastic film, but not one to take lightly on a Saturday afternoon when you’re hungover and kind of looking for a pick-me-up.

Adapted from Eric Lomax’s memoir, Australian Jonathan Teplitzky directs this epic about Lomax’s ordeal on the Burma-Siam ‘Death’ Railway as a prisoner of war; subject to appalling conditions and suffering. Lomax comes up with the brilliant idea to build a radio to innocently listen to the BBC news back home, but the Japanese interpret this as conspiring with the Chinese, thus he is tortured horrendously. The film then jumps to 1980; where Lomax (Colin Firth) is a broken man, forever mentally tormented. Nicole Kidman plays his wife Patti, whom Lomax tragically cannot open up to. Patti enlightens Lomax that Lomax’s torturer Takashi Nagase is still alive, prompting Lomax to travel back into his past to find him and settle the scores once and for all. Tim Robey described The Railway Man as a POW drama that ‘bottles up emotions, and history, and uncorks them as therapy.’ (the Telegraph) It is a tale of both revenge and repentance, hence the ‘uncorking’ therapeutic nature.

When other friends asked how the film was, one of the many words that sprung to mind was actually educational. In a recent interview Colin Firth asked, “How much were you taught about the fall of Singapore and the Thai/Burma Railway? Because I was taught nothing about that.” I have to agree that a lot of fascinating, and seemingly overlooked history is ‘bottled up’ in this epic. Having heard of the ‘Death Railway’, I had no concept of the atrocious war crimes that took place. The final scene of the film shows Firth and actor Hiroyuki Sanada as Nagase, forgiving one another in none other than the Hellfire Pass. Hundreds of allied prisoners perished creating this enormous cutting in just six weeks, picking away with measly hand-made tools for 18 hours a day in the constant fear of being beaten to death by the Japanese. I therefore feel to an extent that this film is a must-see; not necessarily from a cinematographic perspective, but a humanitarian one. The tragic irony of the tale is Lomax’s fervent passion for trains and railways since childhood, his “whole life has been trains”, as his closest friend and war comrade, Finlay (Stellan Skarsgård) tells Patti.

Colin Firth gives a tremendous and heart-wrenching performance similar to that of A Single Man: calm and composed, but trembling with an undercurrent of emotional torment. The film seems romantic at first. Firth and Kidman enjoy a meet cute on a train where Lomax, knowing the British rail routes back to front, has beaten his own delayed train by switching connections, onto Patti’s train. Their budding romance is heart-warmingly mapped over beautiful wide shots such as Eric’s broken umbrella tumbling away across the beach as they wrap up in a kiss. Sadly, all turns rather bleak from then on. Teplitzky masters a mostly seamless switching from the gloomy Veteran’s society bar room where Finley retells Lomax’s ordeal, to being plunged into the horrendous atmosphere of the Burma railway. This careful staging is one of the film’s key merits. Moreover, the acting is stellar. Academy award-winning Colin Firth and Nicole Kidman live up to high expectations, but Jeremy Irvine steals the lime light in his authentic and touching portrayal of an ultimate anti-hero – an awkward, train-obsessed geek.

What had the audience gripped to their seats in a blend of repulsion and fascination, were the torture scenes. You desperately don’t want to watch, but simultaneously can’t peel your eyes away. I was shocked to read that Irvine made the astonishing decision not to fake scenes such as the unforgettable water-boarding episode; “I was clutching at anything for a little glimpse of what Eric had been through.” The young War Horse actor claimed this scene was vital for the role: “We see where Eric ends up – but we need to see why he becomes the way he is. We’d decided not to show a lot of torture, but this was one thing we were going to show…but to do this by halves would have been insulting”. I’m not sure how I feel about his claim that they didn’t show a lot of torture. Images of beating certainly appeared to be never-ending. Perhaps it was the overall depiction of mistreatment and abuse that was over-riding, rather than individual scenes.

The main criticism of the film is that the oscillation of perspective between both Erics, Finley and Patti, albeit clever, makes it difficult to connect with one character. I was gripped with shock throughout, but it wasn’t until Eric and Takashi Nagase were reunited that I felt emotionally gripped. The decision to tear the audience’s sympathy between characters therefore seemingly puts them at an emotional distance. Also, it was clear the reconciliation and forgiveness between Lomax and Nagase was kept deliberately brief – the film wrapped up with real photos of the men and text across the screen describing their long-lasting friendship. However, this was possibly just a bit too brief. You don’t leave the cinema feeling whole-heartedly cathartic, which when such astounding forgiveness has taken place, one should really.

As an easy weeper in mushy, tear-jerker films that push your emotional buttons, set to swelling, emotive music, my judgement often of a truly good film is if it has shocked me so much that I don’t cry. Films in that category include The Shawshank Redemption, and I was surprised to find that The Railway Man elicited a very similar reaction. Myself and my group of friends walked out of the cinema not really knowing what to do with ourselves; our petty problems very much put into perspective. The fact that the film was based on a true story truly hammers it home. I’ll be thinking about Eric Lomax for days.