The Ophelia Effect: On The Virgin Suicides and Personal Grief 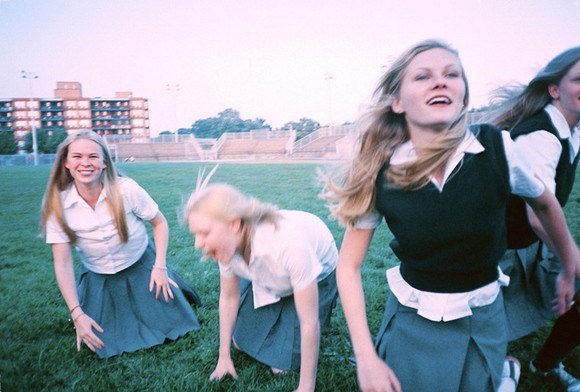 The Virgin Suicides, a movie by Sofia Coppola based off the Jeffrey Eugenides book of the same name, is something of an artsy cult classic. I wish I could say that I watched it because I’m a cultural sophisticate. The truth is far less noble: the rest of my housemates had gone home for Christmas (sans one, who played Call of Duty for two days straight), I was eating toast in my pyjamas after a whole day watching cheesy rom-coms and wanted something different, so I took out the DVD that someone for some reason at some point had given me as a Secret Santa gift. Classy, I know.

It’s a movie that explicitly spoils its ending from the start. In a nutshell, the movie follows a group of boys who are enamoured with the Lisbon sisters, beautiful blonde girls from an overprotective household in their neighbourhood. The film starts with the youngest sister’s suicide and culminates with the other sisters following suit a year later. The overriding question is – why?

It’s not a cult classic for nothing. Good acting, good soundtrack, and a gentle touch of cinematography that made it look so quintessentially 1970s. But when the credits rolled I felt it was incomplete. I found myself reading the Wikipedia synopsis and googling “what is the meaning of The Virgin Suicides”? Nowhere seemed to have a definitive answer. Whatever explanations I found were too vague to sate me. I went further down a rabbit hole that didn’t care for my research.

And then it hit me: that was the point.

Now, whether this is the point that Coppola and/or Eugenides intended or just my own conclusion is up for debate. One of the key ideas of the movie is the boys’ obsession with the girls and the question of why, a code they continue to try to crack decades later, reading their diaries, collecting sources. Because they can’t find an easy solution, they keep looking, just like I was looking for an easily summed up message to take away.

Truth is, in all likelihood there isn’t one. And that struck close to the bone.

Around six months ago, one of my oldest friends took his own life. It was a shock to everyone involved; he’d been sending messages and making plans up until the Friday evening before his death on Sunday, a mere two days later. Once the initial shock of loss and grief wasn’t quite so raw, one question that plagued me as I tried to sleep was the why? To the best of my knowledge, he hadn’t left a note – if he had, his family decided not to share its contents, just as they didn’t tell how exactly he died. I respect their decision but it left a vacuum that could be filled with whatever my mind conjured.

Months passed, and frustration built. Not only did I not know why, but I realised I’ll never know, at least not for certain. The only person who could tell me is gone. I’d stay up at night running over our last conversations, reflecting on his history of mental illness and trying to piece together some idea of what was going through his mind in his last hours.

As I sat braless on the sofa, staring at someone’s long analysis of the significance of the idea of virginity to the movie, I realised that I was like those boys – I’d become fixated on a jigsaw puzzle. In the film, the Lisbon sisters become a fantasy to them, an obscure concept to be studied and dissected. They become the Ophelia archetype, the tragic maiden shrouded in enigma.

Growing up is a process of realising that the world is always more complex than you first thought. It’s like taking a subject for GCSE compared to A level compared to university – easy bullet point lists transform into complex, often competing viewpoints and an understanding that so much of what we think we know is arbitrary. It’s a basic human trait to look for a relationship between cause and effect or an answer that can be tied up with a bow. It’s comforting to think that everything can be boiled down to the essentials.

But just saying that his suicide was caused by mental illness feels inadequate. There’s countless social, cultural, environmental, individual factors that direct us through life. Try as I might, I’ll never know the why.

His loss has been the catalyst for me to reflect on my mental health and reactions to life’s stresses. I’ve done a lot of growing up and learning in the past six months, and doubtless I’ll have more to do. Moving on isn’t forgetting; it’s accepting that I’ll never have the answers, and that’s okay. My friend was someone who died by suicide, not someone defined by it. I choose to forget the futile questions and remember the friendship, the movie nights, the in jokes and the person who was beautiful on the inside and the out

I’m done wasting time dissecting him and his decision. It’s time to start thanking him. And whether that’s what Coppola was aiming for, it’s what I’ll take away.