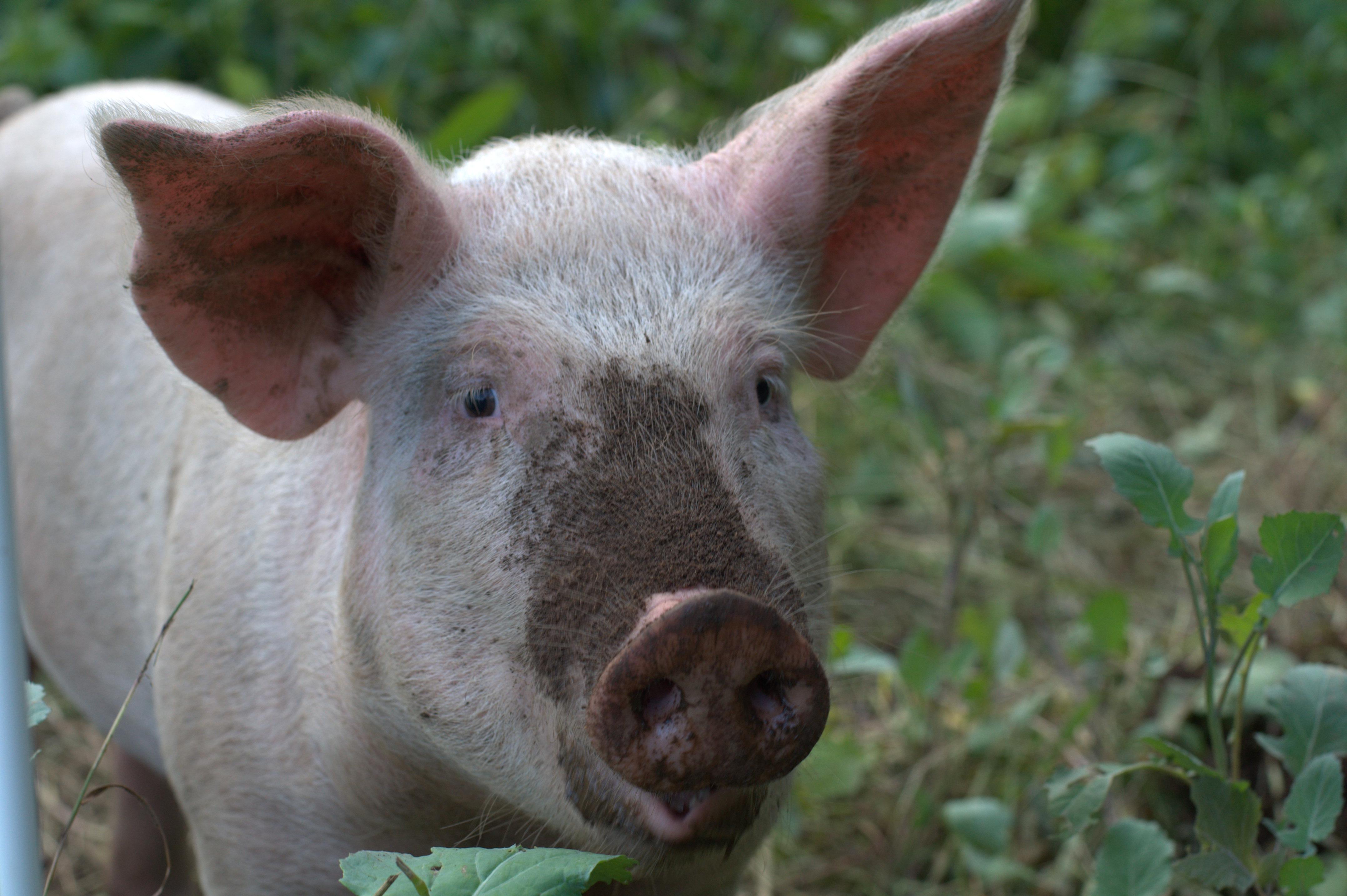 A pig: an apt metaphor for one of our greatest artists?

Early doors in Mr Turner, Mike Leigh plays a visual gag that gets right to the heart of his biopic of J.M.W. Turner (‘Billy’ to his mates). As the artist returns from a trip to the continent, a homecoming feast is laid on by Turner’s household, comprised of his father William (Paul Jesson), and the long-suffering maid Hannah Danby, played by a downtrodden, defeated and eventually disfigured Dorothy Atkinson. As one does in early Victorian society, William procures a pig’s head to adorn the dining table and tuck into the cheek meat. Leigh slices the scenes in quick succession between the pig’s head having its white whiskers surgically removed by William, then the sight of the father, a retired barber, delicately shaving his lathered and laughing son. The message rings loud and clear: Mr Turner is a pig.

The prodigiously talented Timothy Spall (Turner), winner of the best actor award at Cannes, seems to sprout a snout, snorting and grunting, hunting the truffle of that next masterpiece. As Harry Potter´s Peter Pettigrew, Spall is a man constantly shifting shape. From rat to pig is all in a day´s work. For anyone in possession of even the faintest biography of the artist, this should hardly come as a surprise: Turner was a swine. His public legacy of glorious landscapes belies the private character of a bachelor womaniser. The film brings to screen Turner’s twilight years of the great ‘painter of light’, during which he neglected his bastard children and not only hushed his last love affair with Margate landlady Mrs Booth, but even concealed his own identity with the pseudonym , Mr Mallord (the ‘M’ in JMW). Or at least, this is the version of truth Leigh places under the microscope of the camera lens.

Turner was not a child of nineteenth century, Dickensian London, an age of parsimony and supreme morals; his adolescence was during the glory years of the roaring libertarian Georgian period. Growing up near Covent Garden, the young Turner was exposed to the bohemian culture capital of London’s vibrant, bubbling underbelly of subculture: the Soho of its day. As an audience, we perhaps need to lose the critical eye of a Victorian and let Turner live. This goes some way to explaining Turner’s relationship to women that somewhat grinds against Victorian morals and our modern model of equality. But to frequent a whorehouse and have multiple women on the go was standard fare for a man of his ilk.

Two contrasting scenes lend the film its acute sense of pathos. The first occasion is the more obvious. Leigh depicts the relationship between Turner and his father as a partnership, although there is an affectionate, platonic love between the pair, William is in a sort of wilful servitude to the hierarchy: Senior prepares, Junior paints. Turner Snr dies of a lung condition brought on by inhaling the vapours in the preparation his son´s paintings, a martyr to the cause. Leigh stage manages a glorious deathbed scene as William toys with his son, apparently raving about their collective maltreatment of JMW´s mother who was institutionalised (she is thought to have suffered from schizophrenia), before they disintegrate into a farce of laughter as the father reveals his baffling behaviour was all a hoax. The death follows. Leaving a pug-eyed Spall dewy with tears; the final release is all the more effective after the levity of the light-hearted precursor.

The second scene once more dabbles in Leigh’s delicate balance of cheers and tears. Prostitution and pathos are perhaps not the most obvious bedfellows. An artist enters a brothel (and no there is no punch line), where Turner contorts his lady lover into a highly stylised miniature for his own erotica, right the way down to the tilt of the hand, lying pensively on the brow. Turner takes a seat. He draws his weapon, the sketchbook, and commences scribbling. What follows is a scene of both great humour and melancholy. Turner emits a kind of weird chortle of noise before he slowly unravels into a fit of snorts and grunts, then gushing tears. The previously contained grief over his father’s death comes flowing out in this most unlikely and comically rewarding of scenarios. The prostitute just gazes on, completely uncomprehending of such strange behaviour from her customer.

Both these scenes highlight the strength of Leigh and Spall’s Mr Turner. It is a film high on laughter, but also deep in humanising their portrait of the painter. However, for all the pathos, it is the bathos that really shines through. Leigh’s unbridled caricature of the aristocratic and academic circles seems steeped in the qualities familiar from Wes Anderson’s work. Events take a turn for The Grand Budapest Hotel as Mrs D rocks up with Turner’s daughters in tow. Yet, Ruth Sheen’s Sarah Danby has less in common with Tilda Swinton’s Madame D, and, in her over-zealous parlour prattle, more of an influence from Alison Steadman’s rendering of Mrs Bennett in 1995’s Pride and Prejudice. Leigh’s Mr Turner is placed somewhere between Anderson and Austen in the film reference dictionary. Off-kilter, out of tune and occupied by outcasts, eccentrics and oddballs is the world within which Turner works. If Turner, the man, delivers laughs, the real comedic delight comes from the sustained tone with which, Salford born working-class director, Leigh, parodies the early Victorian elite. He nails the snivelling, money-drooling, tasteless extravagances of the amateur art critics, who beset Turner’s career throughout with their snooty interpretations of loftier meanings.

As for the Royal Academy of Art, Leigh concocts a seething brew of scorn that drips with loathing, but, frankly, echoes the reality of a petty, gossip-driven and extremely competitive environment. We follow Turner as his work is exhibited in the Royal Academy. There, each artist competes for optimal hanging position on the floor to ceiling walls of artworks. In a nice (if historically inaccurate) touch, Leigh places Turner’s entry next to Constable’s The Opening of Waterloo Bridge. The two great contemporaries and rivals are opposites. Whereas Constable, played by James Fleet (forever the Vicar of Dibley’s hapless Hugo), dabs precisely at his work, fastidiously stooping on a stool, Turner explodes into the Academy on a wave of bravado, stabbing and spitting at his own canvasses, seemingly with no great direction, but great angst. While both are the forefathers of impressionism and the modern, Constable conforms to the classical model; Spall’s Turner to the brazen attitude of the punk.

Leigh casts Turner as a total outsider. A phantom working-class enigma to his quite exquisite appreciators, the ponytail sporting Sir John Soane (Nicholas Jones) being a particular favourite. Perhaps Leigh goes to excess on the punkish qualities of his subject, but the directorial eye shares the same sentiment as his subject, trampling over the established etiquettes of his world. In the way that only one artist can appreciate another, crossing media from cinema to canvass, Leigh creates a multi-faceted and complex character. Most of all, the director conveys Turner’s all-encompassing devotion to his life’s endeavour. Whether sexist pig or swine, via prostitute portraiture and proto-punk perfection; JMW Turner is, and forever will be, the artist.