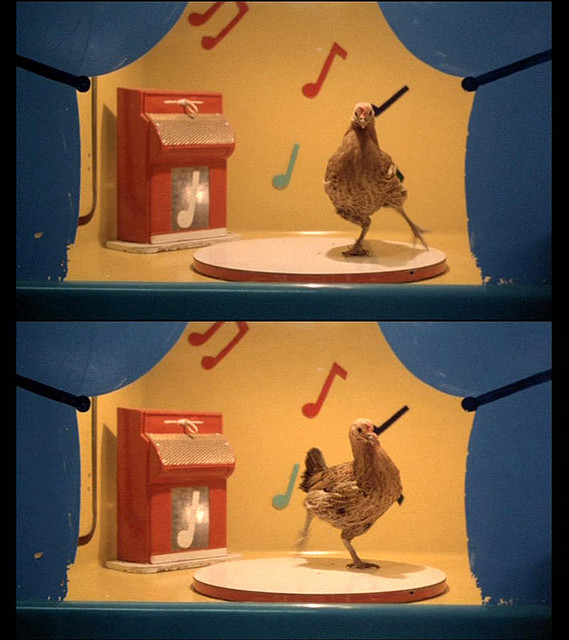 A grooving bird is Herzog’s representation of humanity in microcosm

Werner Herzog’s dancing chicken, appearing at the end of his film Stroszek (1977), is probably more infamously known as one of the final, haunting images that Joy Division’s Ian Curtis saw before he committed suicide in 1980. While its appearance is satirical and almost comedic (especially when viewed out of its context), it has darker undertones, acting as a symbol for the bleak nature of our existence. Furthermore, its appearance is a testament to the futility of Bruno S’s impossible quest through America and the harsh realities of his American dream. At the end of the day, we are simply spectacles dancing for money, and our everyday life is reduced to a mindless performance.

Herzog wrote Stroszek for the street performer Bruno S, whom he also starred in his film The Enigma of Kaspar Hauser. After being released from prison, Bruno S’s character Bruno Stroszek, he meets up with his prostitute girlfriend and is beaten up by her pimps. Wanting a better life, Stroszek emigrates to America in the film with delusions of grandeur and the ideal promises of the American Dream. What he finds, however, is his ruination after a series of mishaps. Despite the promises and hopes that America offers, he ends up losing his girlfriend, and returns to his criminal lifestyle. America is no different than the Berlin lifestyle he left behind; he is still humiliated, abused, and living in a society that is materialistically driven and opportunistic. Bruno has his hopes and dreams, but they are unattainable and unrealistic goals. His experiences with reality metaphorically destroy everything he holds onto, and he is ultimately left with nothing.

At the end of the film, after taking part in a botched robbery and driving through the mountains, he encounters a series of tourist traps featuring animals who are conditioned to perform certain tricks for money. The rabbit in its pen reacts to the siren by mounting a toy fire engine for food. The rabbit’s materialistic drive reflects Herzog’s interest in microcosmic allegory (see Even the Dwarfs Started Small for a very literal representation). The rabbit is a metaphor for societal drive for money and how we are conditioned to repeat the same materialistic cycle over and over again. This uncanny realisation, however, is best exemplified by the dancing chicken.

Herzog once argued that looking into a chicken’s eyes was horrific because it is like looking into an empty void. One can only see idiocy in those black, unintelligent eyes, and its sheer stupidity fuels his fear of chickens (alektorophobia). Perhaps Curtis was confronted by the same emptiness of the chicken’s soul when he looked into those eyes, feeling that horrible realisation of nothingness, and seeing everything reduced to a performance. Together with his depression and the pressures of expectation, this may have been a contributing factor in his decision to end his life. The performance of the mindless chicken is very nihilistic. The chicken is bound to its performance with a material reward with no spiritual or social consolation. It simply exists as we exist within society, working our 9–5 day jobs and receiving a big, fat paycheque at the end of the week. In Stroszek’s world, there is no God or Saviour to save him from his fate. The dancing chicken simply continues to dance.

In the DVD commentary of the film, Herzog was uncertain what the symbolism of the dancing chicken truly meant, but as Ian Curtis realised, it clearly has a more sinister meaning. Despite the unsettling correlation between its dark interpretation and Curtis’ tragic end, the dancing chicken also makes us recognise the economics that bind us in society. With our awareness of the dancing chicken within us comes our potential to break free from our conditioned lifestyles and set positive goals and incentives for the future.