Alfred Hitchcock and the Making of Modern Film 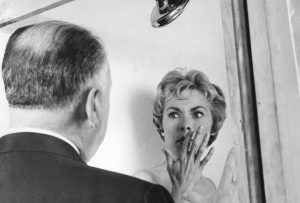 No director in the history of film has been subject to as much scrutiny and analysis as Sir Alfred Hitchcock. However, can we say that any director been deserving of such a long and sustained critical appraisal? Only one man could have trapped Grace Kelly in the apartment of a wife-murderer, pelted real-life ravens at Tippi Hedren and made Janet Leigh’s fateful shower in Psycho so instantly iconic.

Hitchcock’s pictures are examples of wrought, sophisticated plots that still feature in lists of the most popular films of all time. Even now, years after first seeing Psycho, hotel bathrooms are never relaxing places; I always keep one eye open in the shower, as if expecting Mrs Bates’ knife-wielding silhouette to emerge from behind the curtain – surely this is testament to the longevity and power that classic films can have.

Hitchcock began his career working on silent films in the early 1920s, giving him the ability to capture an audience without the need for dialogue – after all, some of his most iconic scenes use the subtle art of suggestion and implication to convey more the more chilling subject material. In popular culture, Hitchcock is commonly referred to as the ‘Master of Suspense’, and of course this is valid; Janet Leigh is oblivious to Norman Bates behind the shower curtain, and James Stewart in Rear Window is completely unable to move – due to a broken leg – when we hear the footsteps of a killer coming to his unlocked apartment. However, as much as I encourage this positive appraisal of Hitchcock and the admiration of his ability to grip an audience, surely remembering him purely as the architect of some suspenseful plots severely discredits his work.

The Hitchcockian films are multi-faceted, multi-dimensional, and in a way highly progressive for their time and place. Decades after their release, they are still as intriguing and chilling as Hitchcock’s contemporaries found them. The stories are polished and sophisticated and weighted in such a way that consistently grasps your attention and refuses to let go. However, with Hitchcock it’s often what you don’t see that’s as important as what you do.

The shower sequence in Psycho, for example, is a prevailing example of the power of implication and suggestion. There is no nudity, no real plunging of a knife, just 52 rapid scene cuts – each one emulating a stab of Mrs Bates’ knife. In Janet Leigh’s first interview after the release of Psycho, she shares the feelings of the audience – “I believed that knife went into me. It was that real, that horrifying. I could feel it!” Combined with Bernard Herrmann’s iconic screeching score, Hitchcock demonstrated how grand an illusion he could create in the making of one of the most famous scenes of all time. 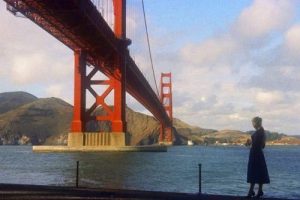 The 1958 classic Vertigo – in my eyes, the best example of Hitchcock’s work – was in 2012 named the ‘greatest film of all time’ by the BBC. In Vertigo, retired detective Scottie (James Stewart), crippled by acrophobia, is hired to follow the beautiful yet mysterious Madeleine Elster (Kim Novak) which culminates in an obsessive and introspectively charged pursuit. But in Vertigo, Hitchcock sumptuously blends together all the best ingredients for a film – a complex yet sophisticated plot, an exceptional score by Bernard Herrmann and a timeless location.

One of the most recognisable stills from Vertigo is Kim Novak solemnly discarding flower petals into the San Francisco Bay, with the scarlet Golden Gate Bridge standing boldly as the backdrop. The use of location is a secret to Hitchcock’s success; intertwining famous landmarks, such as Mount Rushmore, the Golden Gate Bridge and the Statue of Liberty within the plot creates a vast sense of scale, whereas in other films such as Rear Window and Dial M For Murder, both starring Grace Kelly – the jewel in Hitchcock’s crown – all of the action occurs in confined, bordering claustrophobic, apartment spaces. 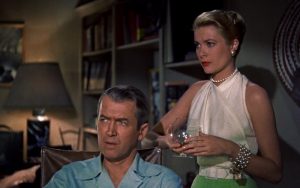 James Stewart and Grace Kelly on the set of Rear Window (1954) (source: http://screenprism.com/insights/article/does-jeff-and-lisas-rear-window-banter-parallel-the-dramas-across-the-court)

However, in recent decades, Alfred Hitchcock and his films have been placed in the firing line for the seemingly homogeneous cast of leading ladies. All of his most famous films feature the ‘Hitchcock blonde’ – a beautiful, icy-blonde woman, poised yet with an air of mystery and indirect sex appeal. It has been suggested Grace Kelly became the source of Hitchcock’s infatuation with blonde leading-ladies, and thus he tried to replicate this with Vera Miles, Tippi Hedren, Eve Marie-Saint, Kim Novak, Janet Leigh and so on.

Whilst ostensibly this list makes Hitchcock’s heroines seem homogenous and interchangeable, there is a strong complexity and fire masked behind the cool immaculacy, snowy-blonde hair, and crisp tailored suits. In many ways Hitchcock’s pictures are highly progressive for their time and place; they reinvent the subordinate and domesticated feminine ideal of the era and are by no means decorations or accessories to a masculine plot.

Whilst many of the leading ladies can be considered victims, they are far from passive and they often wield more influence than the men – In Vertigo, it is James Stewart’s acrophobia that serves as his ultimate weakness, and in Rear Window, it is again Stewart whose physical incapacitation leaves all the dirty work up to Grace Kelly. So perhaps it is time for a reappraisal of the Hitchcock blondes, and about time those of you who have never seen one of his films to treat yourself – you’ll never look at a shower curtain or a swarm of birds the same way again.