The return of the annual Durham Drama Festival has been long overdue, and the students involved in the Assembly Rooms Programme certainly didn’t disappoint. From a toxic, twisted relationship, to a hilarious farse, finishing with two men navigating the challenges of secret intimacy, I was transported into three distinct worlds in the space of three hours.

Set in 1930s Chicago, this play explores the relationship between Mr and Mrs Alexander, from the moment they first meet, to their tragic end. What begins innocently enough, dancing together in a bar, quickly spirals into a web of lies and hostility as Mrs Alexander falls pregnant, only to lose the baby in the first two weeks. Richmond’s piece takes a sinister turn when Mr Alexander’s jealousy towards other families becomes all-consuming, to the point of murder. After a shock reveal of Mrs Alexander’s deceit and betrayal regarding their unborn baby, both descend into a form of insanity.

Ben Willows (as Mr Alexander) and Charlie Culley (as Mrs Alexander) worked well together to portray the dissonance between their surface level intimacy and the ultimate distance between them, as deceit permeated their relationship. Willows expertly established his superiority through his confident and occasionally flamboyant physicality and smooth American accent. This, in contrast with Culley’s distressed characterisation highlighted the power imbalance between them and Mrs Alexander’s inability to communicate honestly with her husband. However, I felt that some of Culley and Willows’ highly emotional moments weren’t entirely convincing, such as when Mr Alexander finds out the truth about why the pregnancy failed. I didn’t entirely believe Culley’s fear in response to Willow’s fierce attack, as she recovered almost too quickly to assure Mr Alexander that she simply didn’t want to lose him. I also found it difficult to sympathise with either character, which established an emotional barrier between myself and the action on stage.

There were, however, many other notable aspects that contributed to the overall success of the production. For instance, the omniscient narrator (played by Raphael Kris) was very effective, not only for providing important exposition but also for building tension, by leaving the audience expecting the unexpected. Not only was the script itself a great original piece of writing, the music was also an original score, that Angelica Shortanova, William Ahlert and DUFAMS should be extremely proud of. Overall, this was a fantastic production that explored the chilling reality of when toxic relationships reach their extreme. 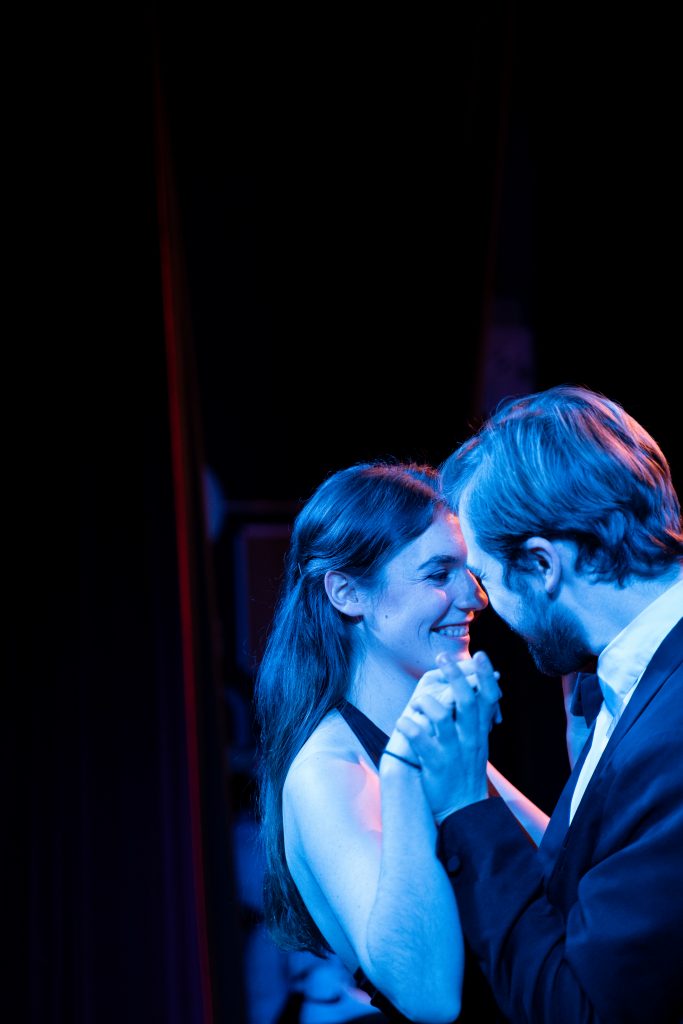 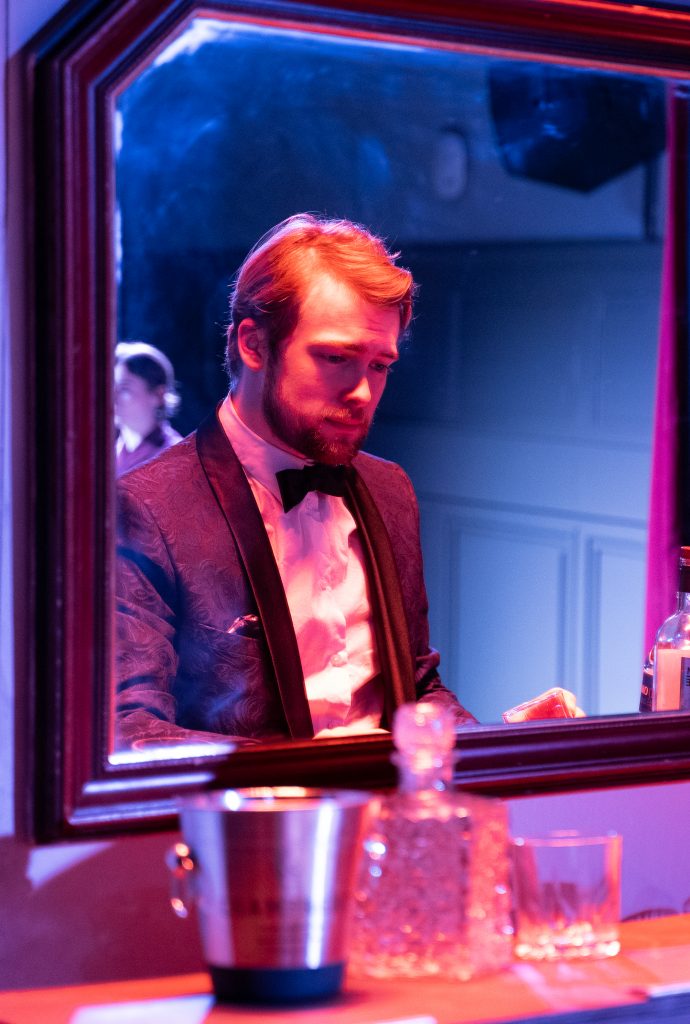 This production had me laughing from beginning to end. There is always a danger with farcical comedies that they will be just slightly too over the top and just slightly too absurd, but I can confidently say that Hotel Charmon got the ridiculous nature of the style just right. This was due to the combination of a fantastically witty script, that was brimming with comedic opportunities, very clever directing from Ellie Fidler and Ben Cawood and outstanding commitment by every member of the cast.

Tony, an over-the-top posh romantic has fallen into 50,000 pounds worth of debt and needs to pay it back to Greg, an American gang leader who is fast on his trail. To secure the money, he tricks Julia into falling in love with him, and convinces her to agree to marry Rufus, a wealthy self-obsessed dinosaur fanatic, in order to steal the engagement ring to pay back his debt. The plot unravels to reveal Tony is also involved with the maid Wendy, and all of these strands come together in the play’s climax when all the characters find themselves at dinner together. Tony’s deceitful intentions are revealed and him and Julia are taken away. In classic farcical style, we find out the maid is the true con artist, along with the random guy at the restaurant, the seemingly most irrelevant character in the play.

What made this play truly brilliant was when the actors strategically clocked the audience, as their timing was always spot on. Alexander Bittar in particular, was exceptional, both in his overall commitment to his ridiculously over the top character, and for his comedic timing. It was Miriam Templeman though, that had the best one-liners for me. Two of my favourites include: ‘I don’t make it, I serve it,’ which she directed to the audience, whilst smirking, and ‘You bloody apricot of a human being!’ – a truly great insult, I think we can all agree.  Isabella Thompson receives my award for most outstanding commitment to the utter stupidity and silliness of her character. Her incredibly well-sustained posh accent, together with her stark facial expressions and frantic physicality made her character really quite loveable, despite her constant whinging. Ben Cawood should also be recognised not only for his role as assistant director, but for stepping in and playing Eric fantastically (the random guy at the restaurant), after Covid-19 significantly depleted the cast. This play was hilarious, witty and ridiculous – everything a farce should be! 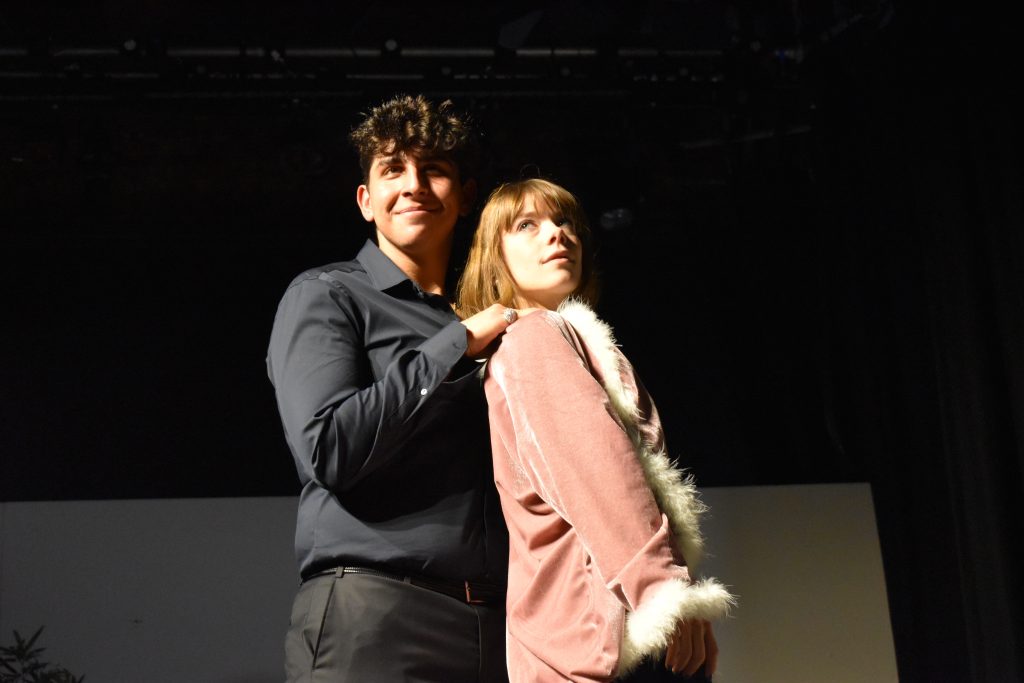 I have to agree with the Director, that ‘the script of Cottage itself is a work of art’. It is expertly crafted to be pacey, hard-hitting and incredibly genuine. Ben Willows displayed extraordinary talent throughout the evening, in his role of Mr Alexander, as well as one of the lead characters in his own self-written play. Willows and Stephen Ledger worked masterfully together to explore the growing connection between strangers both physically and emotionally, as they meet in a grimy public toilet.

The play is overtly about public sex and the physical aspects of queer relationships during a time when the consequences of being caught were very severe. Cottage deals with the realities of isolation, confusion and shame that confront homosexuality. Willows effectively created an awkward, vulnerable character, who is desperately seeking both emotional and physical connection after the breakdown of his marriage. By initially avoiding eye contact with Ledger, pacing and constantly looking out for intruders, his crippling anxiety was successfully conveyed to the audience. This contrasted Ledger’s calming yet reserved presence, which gradually breaks down to reveal an isolated character who also yearns for true connection, despite his constant assertions that he merely wants sex.  Willows’ awkwardness and Ledger’s support and increasing vulnerability made both characters very likeable, adding to the plays powerful sincerity.

Both actors displayed incredibly brave performances, as the audience became extreme voyeurs into the very private, yet also ironically public (due to the location), desires of the men. The addition of a female character towards the end of the play, introduced a new layer of tension that built to the play’s tragic climax. Darcy De Winter successfully established her character’s confidence and manipulative nature, which made her very dislikeable, as she acted to serve her selfish desires. The one slight criticism I have, is that I felt at times, De Winter’s delivery was slightly over the top, which occasionally jarred with the genuine acting of Willows and Ledger.

Overall, however, in terms of artistry and bravery of performance, this play was certainly the winner, giving a voice to the emotional and physical desires of the men that have been conditioned to believe they had to suppress. 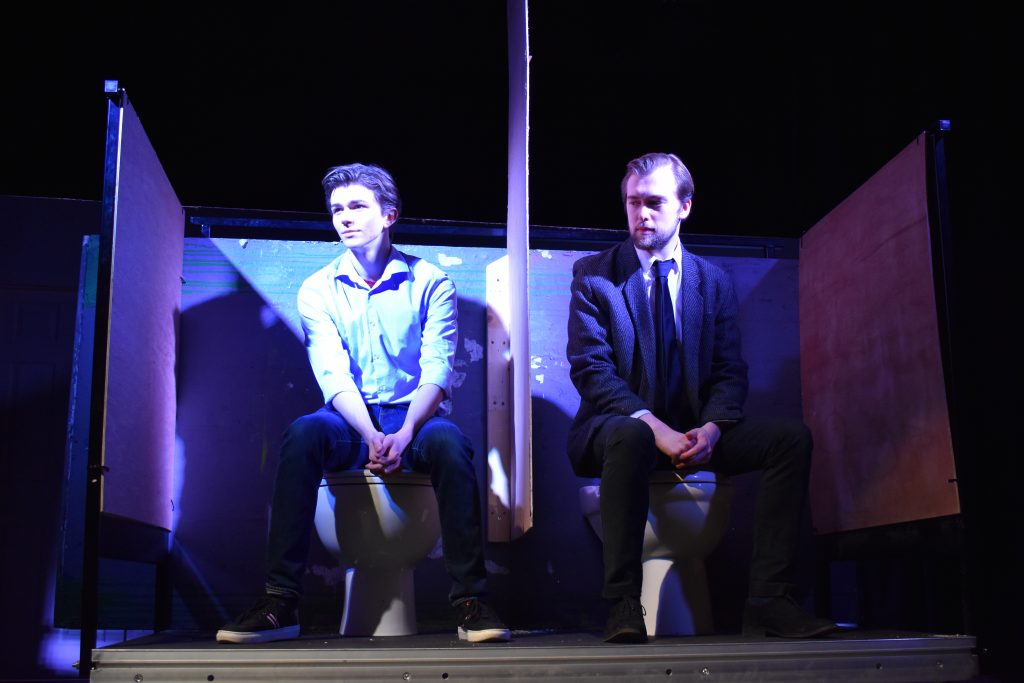