DU Art Soc’s ‘Drop the Veil’: A must-see for art-lovers and environmentalists alike 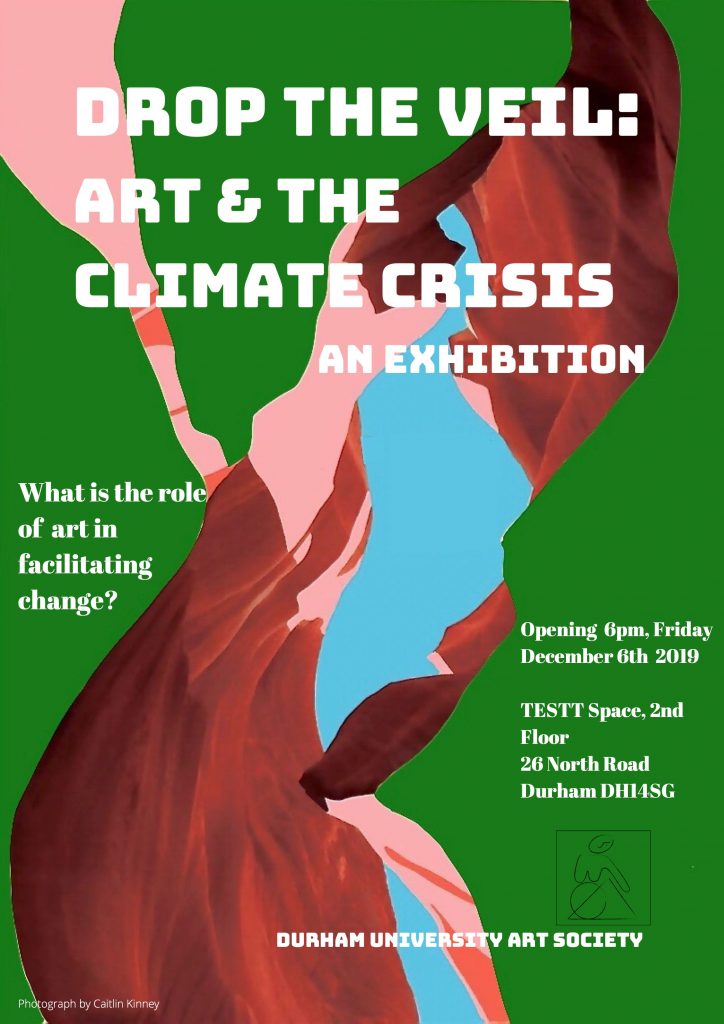 Durham University Art Society is launching ‘Drop the Veil: Art and the Climate Crisis’ this Friday; Art and Photography spoke to Alice Lefranq Frojd, Art Soc President and prominent Durham artist about the vision behind it and her hopes for the exhibition.

It’s no secret that awareness of climate change is on the up. The Friday strikes, the Extinction Rebellion posters, the reposts of Greta Thunburg (check) all over social media. It’d be easy to think that this constitutes enough. Not for Alice Lefranq Frojd, this year’s Durham Art Society President, who is pioneering community, change and growth within the seemingly underground artist network at Durham.

Enter ‘Drop the Veil’ – a carefully curated exhibit that demands audience attention. Students and local artists have been challenged to submit works that reflect their reaction to the climate crisis, or works made from recycled and natural materials. For Alice, the journey has been a personal one; the realisation that, as an individual, you are not only able to – but have to – try and make a difference beyond sharing posts on Instagram is one that has become the driving force behind the show.

“We wanted to start a conversation”, Alice said of the inspiration behind it, “There are a lot of negative pressures [in the climate change debate] that people respond badly to… we wanted to change that.’ It certainly seems that she’s on the way to doing so; I have never been so impressed by the level of thought and insight that has gone into curation. There are works from Lumière artist Mick Stephenson, and a specially created soundscape by Durham University’s own Jake de Glanville to accompany it, as well as pieces from students and local artists, such as Caitlin Kinney, who Alice excitedly cites as someone who she ‘really looks up to’ for her artistry and environmental activism.’

The cohesion between art and activism is an intrinsic one. As an artist, it can be incredibly difficult to balance creating meaningful change with creating works that stem from genuine inspiration. It’s something we spoke about at length, and Alice stressed the importance of creative, personally involved art in generating audience interest and passion. ‘We wanted to frame the issues in art because it’s a way of offering a new way into the issues of climate change… we hope that it might encourage people to connect with it in a different way.’

This concept of new connection is one that has permeated the entire event; there will be carefully placed whiteboards for viewers to write their views on, and people are encouraged to interact with the artists who will be at Friday’s showing. The soundscape has been carefully designed to immerse attendees – it’s intended to be a fluid, two-way discussion that reflects the perspectives Alice thinks we should be taking on climate change. It’s not an exhibition intended for static appreciation, but one that encourages discussion and debate, carefully reflected in the pieces exhibited.
One of the key themes here is community; in the face of an increasingly fractured climate debate, this seems integral. Alice emphasised the importance of locality for both artistic purposes and environmental ones – ‘everyone thinks about Antarctica or the Rainforest… predictions are focussed on these far away locations – but what about Durham? No one knows what will happen here?’. This proximity is one that is demonstrated in the breadth of artists exhibiting; Alice and her team have made a point of working with both local and student artists to bring together a community that can seem incredibly divided. She’s had her fair share of trouble exhibiting locally; after being ‘quite disappointed at the way student artists were treated’,

It’s a vicious cycle in which students aren’t offered any compensation for the time that goes into their work – and thus their art continues to be under-represented, under-financed, under-supported. Alice is hoping to change this with the Art Society – by providing an exhibition that exhibits both local and student artists, she hopes to begin ‘merging the local art scene and the student art scene’ and ‘to create an artist network’ that will ensure a more prominent community of artists in Durham, allowing their messages and the effects of their art to become more widespread.

What really came across when Alice and I chatted was her sense of gratitude and excitement at working with and spearheading this burgeoning art scene, permeated by a sense of fear. The government is not supporting artistic spaces – with the TESTT space being demolished along with the bus station building next year, it is looking increasingly unlikely that artists will have a space – and a community – to support them. In keeping then, with the increasing pressures of climate change. It doesn’t seem too far fetched that Alice’s advocation of the inextricable connection between art and politics is absolutely correct – while ‘a lot of people don’t really ask the right questions’ or engage with art in a way that supports an artist, this seems like a start.

DROP the VEIL: Art and the Climate Crisis is being shown at TESTT studios from 6pm-10pm on Friday 6th December 2019 and 12pm-4pm on Saturday 7th December.