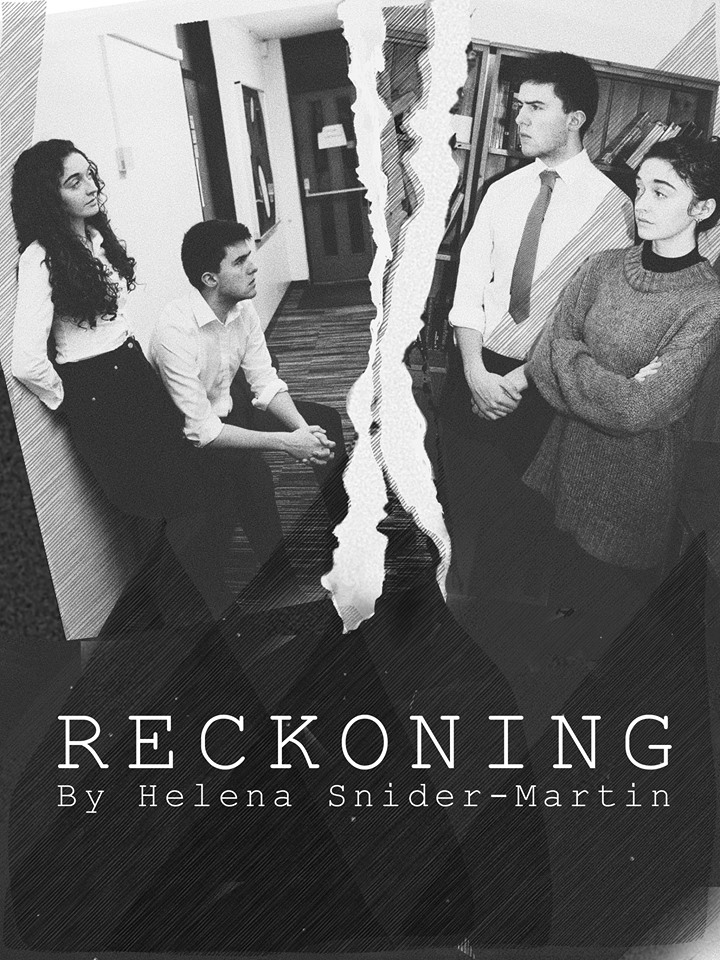 Reckoning is about two students, Rachel and John, who get caught having sex in school. As they wait to be called into their head teacher’s office, two of their teachers discuss their fate. The play has quick-fire dialogue, and shifts suddenly from funny to uncomfortable moments. If you’ve ever had an awkward encounter in school and had to deal with prying teachers, you’ll hopefully connect with it. Catherine Wright and Max Greenhalgh, the two cast members, are really exceptional, and help lift the script to the next level.

I had the idea for the play when I was thinking about the grey area in between ‘relationships’ and ‘friendships’ –basically, how complex label-less relationships are. I think lots of us have been in a situation where we’ve been sexually attracted to a friend, without necessarily wanting something further. The play starts from this premise.

The dialogue of the two students, Rachel and John came first. It was influenced by lots of conversations I’d had with friends surrounding sexuality, consent, and peer pressure. Afterwards, I worked on their teachers’ conversations, which proved much harder – possibly because I’m not a fifty year old, and the thought of being a ‘real adult’ is so genuinely alien.

I struggled a lot with the script to begin with; I wish I was someone who could claim they wrote their entire DDF submission in 48 hours (which I’ve heard before), but I have been working on the play since September. Applications opened for IUDF and writing a 15-minute short seemed like a more manageable task than completing a full-length play.

We performed the play in Glasgow and Luke and Alice (the co-directors) encouraged me to expand it further. The play now runs at around forty-five minutes – something I never envisaged completing at the very start of the process. We submitted an extract to a scratch night in London, at which Catherine and Kishore Thiagarajan-Walker performed. This caught the eye of Matchstick Theatre, who I’m now working with to stage the full-length version of the play. The point is that before IUDF and DDF, the process of writing a play genuinely seemed impossible; it was such a large and overwhelming task to break down.

It turns out that for me at least, writing it in stages – starting with a short and slowly building up the word count – removed my initial sense of intimidation. Something I didn’t realise about playwriting was how different the first draft is to the finished product. I would say to anyone who is trying to write a piece of drama that first attempts don’t reflect how the piece will turn out at the end, and the hardest part is actually starting. I’ve had the best time working on it during rehearsals, and I just hope people enjoy watching it as much.

Reckoning is part of Durham Drama Festival. It will be held as part of General Programme 2 on Wednesday 6thFebruary and Friday 8th February at 8pm, and Saturday 9th February at 2.30pm, in the Mark Hillery Arts Centre.