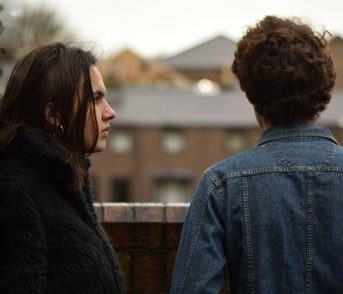 Davey is kneeling in the centre of Hatfield Chapel, the audience surrounding him in the pews. Alone on the stage he tells the story of finding his lover’s body. There is a mythology of judgement latent in the choral music, as a background to his guilty confession that he was rooted to the spot as his lover was beaten to death in the abandoned toilets of Shoreditch Rye railway station.

Vincent River is a visceral meditation on grief, sexuality, and alienation. Gritty and unrelenting, this challenging performance unravels the death of Vincent River, an artistic 35-year-old man who we encounter only through the memories of his mother, Anita (Victoria Bull) and the schoolboy, Davey (Alexander Marshall) who found his body and is later revealed to have been his lover. Both Bull and Marshall gave brilliantly three-dimensional performances, with believable East London accents (a welcome rarity). Alexander Marshall’s performance as Davey: the petulant and wounded schoolboy; wise beyond his years and grappling with his sexuality; is flawless. Victoria Bull’s portrayal of Anita is equally compelling: she is fiery, prideful and her standoffish curiosity and humour is infectious; evoking empathy without pity.

Anita’s son as the victim of a homophobic killing, is forced to confront her son’s sexuality with warmth through Davey, and to reconcile her own troubled history. The play flows between moments of incredible tension and resolution between the two characters – who begin nearly as strangers if it weren’t for Davey following Anita home, both before and after she moved from Shoreditch to Dagenham. Davey lingers in Anita’s shadow, following her, and likewise both are tied to their memories of Vincent, both dead and alive. During Davey’s own recollections of his past and of Vincent, Anita follows behind him onto centre stage. The relationship between memory and reality in this play is lovingly blurred – ‘nothing was real until I told Vince about it’ as Davey confides in Anita; likewise, both characters use narrative to realise and reconcile their own anguish. In part the play seems to act as a thread between two interconnected monologues – where both Anita and Davey are no longer outcasts for they listen to each other. Ridley’s script is similar to Pinter’s work in the movement between quick dialogue and sprawling exposition – the cast navigate the script seamlessly. This motif is offhandedly parodied in Anita’s peculiar ear joke, surprisingly eliciting a positive reaction from the audience, which can only be attributed to Victoria Bull’s fantastic characterisation of Anita, but moments of comic relief in this play are scarce.

This tenuous thread holding them together forces the tone of the play to straddle vicious moments of anger and tentative catharsis. The steep dichotomies within the play of openness and withdrawal are almost Beckettian. Emotions are shown at their most extreme in this production, without failing to be conveyed believably with a challenging script. The play unfolds as we become aware of the striking similarities between Davey and Anita, both have deep running guilt over their sexual histories.

Anna Haines’ directorial style distils and clarifies the tension in Vincent River. When Anita or Davey plunges into their memory, they break out of the confined space of the sofas and boxes of the living room/altar into the wider and more freeing central space of the chapel. In Ridley’s script, which swirls through the streets of East End mixing memory, grief and desire must have been startlingly tricky to transpose realistically into such a peculiar space, but it worked. The setting gave to the performance an allegorical tone, a play about judgement, sexuality and emotional connection set in a chapel conveyed an haunting and eerie air. Moments of connection between the two characters are shown in these episodic recollections where wandering into the open, uncharted space certainly represents an escape from the claustrophobic Dagenham flat into their own memories. This tentative use of such an intimate space is incredibly effective, Anita shadows Davey, walking tensely behind him as he recounts climbing through the abandoned railway station to the “Sodom and Gomorra of Bethnal Green”.

The raw and bruised sexuality was slightly underplayed, moments such as the foot massage were tender; the connection between the two was familial and questionably sexual at that point in the play. Overt sexuality and desperation were bubbling close to the surface at every interval of emotional connection between the two –  as an attempt to reach through each other to Vincent. There needed to be more time for the characters and the audience to linger on such a profound, desperate moments of intimacy, it wouldn’t have undermined the integrity of the play. Nevertheless, the two-handed cast straddle crushing tension and deep, jaded connection unerringly well.

Vincent River is not an easy play to watch, every part of working class life and identity is unravelled between the lives of Davey and Anita, ending in a moment of discord as Anita shrieks after destroying the last of her mother’s cups.