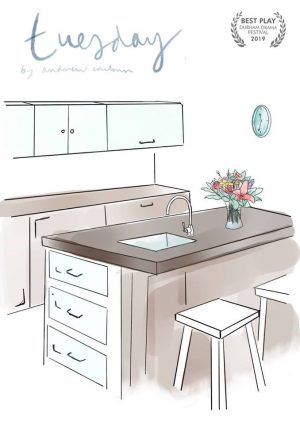 It feels wrong to watch someone whose long fringe makes him seem unaware of our gaze. But watch Daniel we must, for an unusually significant amount of time, as he tries to occupy himself after a day of college. ‘Tuesday’ is funny, intense, and both comfortingly and disturbingly everyday.

Amongst other student paraphernalia the set décor consists of a half-eaten chocolate digestive; packets of hula hoops; a can of coke; opened post; course books; a pukka pad; and apple earphones.

We don’t hear Daniel (Jack Firoozan) speak properly until Sophie arrives, but we don’t need to. The set, Daniel’s behaviour, and his body language speak for themselves. Something isn’t quite right, and it’s about to get a whole lot worse. With a title like ‘Tuesday’, the prospect that this one will be unlike any other looms in our minds. He’s disconnected, sipping on his Smart Water, and moving things from one table to another just to pass the time. And he pays extraordinary attention to rolling up his sleeves. This is familiar behaviour for someone whose mind is occupied, and Firoozan may as well be in his own home.

Frequently biting his nails, his body squirms for some sort of release, and in his conversations with Sophie, we get the feeling it might just get the chance. She mocks his song choices in a way we can all relate to, mentions ‘Jemma’ whenever she gets the chance, and during her anecdotes he impatiently scratches his head. Daniel is misunderstood and lonely. And he’s dodging phone calls. He presses the play button on his phone himself, and the songs blare from his own Bluetooth speaker–not the overhead, professional ones we might expect in a theatre. The actors leave the stage for the characters to leave the room. The props are probably Firoozan’s own, if not the production team’s, which means they might as well belong to us. These are 45 minutes of our lives as well as his.

A young audience can relate to everything in the lead up to the climax: anger at how today’s pop music all sounds the same, conversations about teachers and English presentations. The play’s humour relies upon this.

But soon, being able to relate to Daniel isn’t that funny anymore. When he finally answers the phone, the audience naturally wants to know what has happened, but the play urges us to focus on than how Daniel, Sophie (and the rest of us) are able to react. Jack Firoozan and Grace Longman’s acting reaches its peak at this most important moment of the play, where we are so immersed in the action it hurts. The play cruelly ends when we still have room for more.

Lion Theatre Company’s ‘Tuesday’ was performed on 18 June as part of Durham’s Summer In The City Festival.