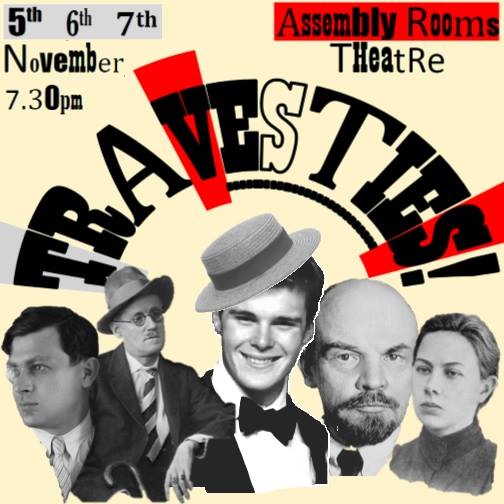 ‘the audience loved it’

At the play’s start, the curtains opened to reveal an absolutely stunning set: the back walls were covered in a mural of bookcases, all the furniture wrapped in pages from books and hanging from the ceiling were books cleverly arranged like birds, and the lower stage was decked in a similar style with an armchair in the corner. Alissa Cooper must be commended for what must be one of the best sets I’ve seen at Durham.

Stoppard is renowned for his brilliant yet complex plays, and Travesties is no exception. The dialogue is long and difficult yet the cast managed to make it clear and understandable with seemingly little effort.

The play starts with a long speech from Henry Carr (Alex Colville) that was captivating; Colville had the characterisation nailed and managed to leave the audience hanging on his every word. It then moved into young Carr and the swift change in physicality Colville adopted really made the transition smooth and the ages very distinguishable.

With many of Stoppard’s long and complicated plays, it’s easy for the comedy to get lost, but this wasn’t the case for LTC’s production. The fine line between broad physicality and heavy over-acting was well achieved, and the contrast between Tristan Tzara’s (Rohan Perumatantri) overdramatic tone and lavish hand movements, and Carr’s more preserved self, worked well, particularly in the long scenes and intimate space of the lower stage.

The acting was all-round outstanding from every member of the cast, and it’s unusual to not have a single person underachieve. If only to ‘nit pick’: the accents were a bit hit-and-miss and did hinder clarity at times as I lost some of what was being said.

But the Russian was brilliant, and spoken extremely convincingly especially since none of the cast speak Russian (as far as I’m aware…)

If the first half felt somewhat prolonged and lengthy, the second half picked up hugely in energy, and the pace was revived. A scene that particularly stood out for me was between Cecily (Clarissa Lonsdale) and Gwendolen (Annie Davidson) as it was done entirely in song. Both have beautiful voices and the way each character played the recognisable false ‘niceness’ and backstabbing bitchiness was both masterfully executed and outright hilarious.

And of course I cannot miss the dance scene. Never have I been as surprised as when Cecily whipped off her dress to reveal red underwear and proceed to dance with two other half-naked male cast members in sparkly hats and braces. It was hysterical and the audience loved it.

I really have to applaud Anna Jeary for pulling off an extremely difficult yet powerful script, and I urge everyone who hasn’t to come down to see Travesties before it’s too late!