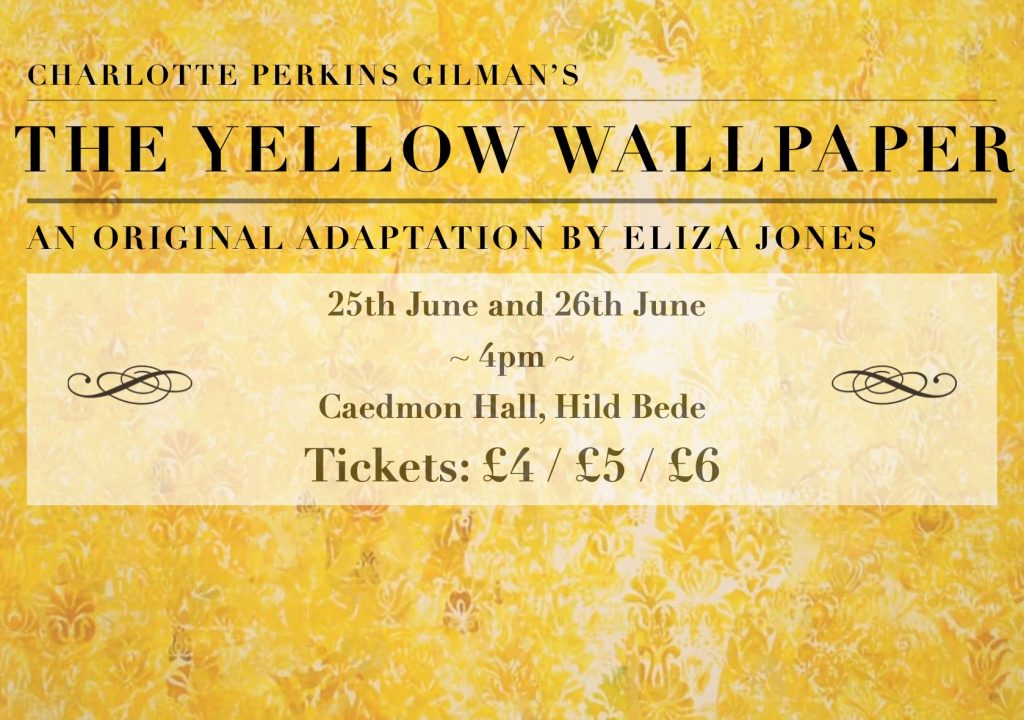 Being an incurable fanatic of Gothic literature, I was hugely excited to observe how Hild Bede Theatre had moved to animate Charlotte Perkins Gilman’s short story, ‘The Yellow Wallpaper’, on the stage. To summarise the following review quite shortly, I was not disappointed.

First, congratulations must go to director Eliza Jones, who has also written an original adaptation of the short story for this production. Jones has woven some of the best of Gilman’s writing into a script which utilises both the physicality of live theatre and the ephemerality of the theatre-space in its ghostly evocation of the tale: a Victorian woman (Betsy Bell), nameless, is coerced into a prolonged period of bed rest in an attic room of a country manor, as a remedy for an alleged nervous depression following the birth of her first child. There, she becomes at first irritated, then enraged, and finally obsessed by the ‘grotesque’ and ‘repellent’ yellow wallpaper, whose patterns and ‘lame, uncertain curves…plunge off at outrageous angles, destroy themselves in unheard-of contradictions’. In the maddening spirals of the print, the woman begins to identify faces, she thinks, of other women who have been trapped, now residing within the paper itself.

The staging of the production is perfectly suited and applied to the narrative. Before the show begins, the audience is taken around to the back of Caedmon Hall, and brought onto the stage through the side door. We are introduced to the woman’s containment through our own: the stage curtains are closed, and our seats are placed directly in front of the small performance area, so that when Bell’s character and the ensemble (who multirole as both the ‘wallpaper women’ and the woman’s husband, John (Esther Gillmor), a doctor (Amber Conway), and a maid (Esalan Gates)) begin to trace their fingers across the patterns of the wallpaper, they are also pointing at and tracing us, directing our attentions anxiously. When the woman comments that she has learned to anticipate her visitors by the rhythm of their footsteps, we are suddenly conscious of each creak the actors make as they step across the boards of the stage.

Bell’s performance is wonderfully consistent, speaking with a peculiar but entrancing monotony whose significance endlessly transforms alongside the progression of the woman’s psychological diminishment. As John, the frustratingly-dismissive husband, Gillmor very usefully assists the production in its aim to demonstrate that ‘oppression, isolation and psychological suffering remain as relevant as ever’; her portrayal of John’s wilful ignorance doesn’t fall into the trap of becoming a spiteful caricature, instead signifying the real circumstances by which these incarcerating and oppressive practices are enacted against women as a matter of institutional and domestic normality. Conway’s Doctor and Gates’s Maid, equally, are dexterous in their conjurations of these characters, just as in the subsequent returns to their primary roles as the material spectres of the wallpaper.

There are also a number of impressive innovations at work in this production. William Davies’ musical contributions are employed with suspenseful success—even during ‘silences’, the room is not silent at all for the absent-present emptiness of the speakers’ buzzing, which only prompts us even further onto the nervous edge of our chairs. With well-rehearsed and choreographed movement and fascinating shadow work, this production is one whose exposure of generationally-installed misogynies do not also shy away from playing with the enthralling spectrality which famously oozes from Gilman’s prose.

This is an extremely exciting and intriguing adaptation, which I very much hope will enjoy further livelihood on the summer festival circuit this year—the only shame is that this production only runs for two performances!