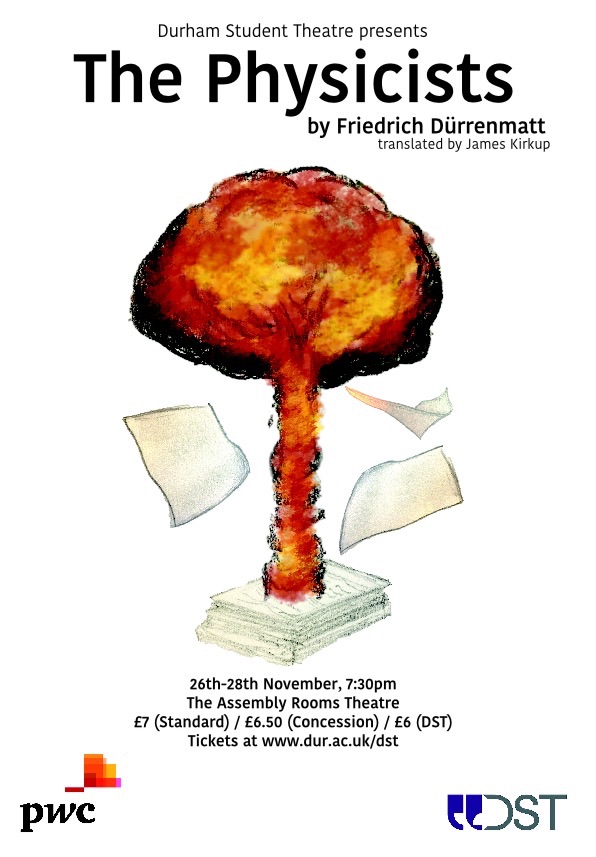 ‘the team deserves to be congratulated’

Friedrich Dürrenmatt’s The Physicists is, as the programme notes, a ‘satiric drama’ purporting themes of moral responsibility in the scientific world. Anyone who has been involved in a DST Freshers’ play will have undoubtedly informed you of the overwhelming stress and chaos that comes with it. On this occasion, director Fergus Neville was successful in delivering a night of enjoyable entertainment, despite it being lacklustre in places, with the themes of the play being well delivered.

Instantly commendable were the lighting and set design. While the simplistic back drop of three doors initially seemed rather plain and straightforward, as a spotlight was placed over each door a chilling atmosphere was created. This set the tone and was effective in representing the rooms space to which the three patients were condemned. Credit must be given to the dramatic vision for this idea, and Alok Kumar and Alice Clarke must be mentioned for making it effective in practice.

George Ellis as Möbius did very well to present the mental turmoil his character suffered from, and he had moments of very subtle and touching passion. When delivering his violent outbursts or pretending to be mad, however, I felt that he tended to be too over the top. His scenes with Hiba Benhamed (Nurse Monika) also lacked chemistry, though the latter alongside with Jasmine Price (Nurse Boll) was very naturalistic in her acting, and both were a pleasure to watch. Grace Bryan’s (Dr Von Zahnd) performance in general was strong and she showed good development of her character, though I was often confused by her accent – although she was speaking with an English accent, some of her words came across sounding unnecessarily European.

The highlights of the show, however, were undisputedly Freddie Rollason as Newton, and Jack Whitmore as Einstein. Both had engaging stage presence and seemed completely relaxed in their vibrant and colourful characters, striking the perfect balance between the comical elements and the more serious complexities of their roles. In fact, Rollason displayed one of the finest, most convincing presentations of natural acting that I have seen this term.

The show itself was of good length and never seemed to drag, though there were many comedic elements and opportunities that were missed. Many of the potentially comic lines were delivered seriously rather than satirically, and while this didn’t mean that the themes of the play were lost, they just weren’t delivered with as much poignancy as was possible. The blocking in the most violent and energetic scenes was of very strong quality, appearing slick and effective. This was especially true in the first half when Möbius was feigning madness to his ex-wife, although the scene was let down by the other actors on stage who had a lack of visible response, with many holding rather plain facial expressions despite the fact that a man close to their characters was seemingly having a breakdown. It must be noted though that the first half did go on to end on an intense high note with a difficult murder staged to great effect.

Furthermore, despite strong individual performances, it would be fair to say that there were aspects of the production’s ensemble acting which warranted criticism. Several actors lacked control of their physicality, with certain cast members often moving unnecessarily when they would have done better to stand still, and others being very wooden in their movements. I would also comment on some of the lines being delivered too quietly to be heard across the whole auditorium (a fixable issue which can be easily dealt with). If first night nerves were to blame here, then the actors would do well to just relax into their roles, as no one was guilty of lacking characterization. If the issues were not just down to nerves, then I am certain that more experience within student drama will iron out many of these problems.

Overall, this production was highly commendable as a Freshers’ Play give that it is very hard for those involved to shape and nurture a play when trying to adjust to university for the first time. When compared to most Assembly Rooms Theatre productions, its flaws were very much evident, especially small but noticeable amateur mistakes like an actor walking off stage to retrieve an item of clothing that has fallen onto the auditorium floor. It did, however, have many redeemable features and the team deserves to be congratulated. Given creative, time and financial constraints, a Freshers’ Play can do no more than provide an entertaining show whilst showcasing some of the talent that first years have to offer. This production delivered in these aspects, and I look forward to seeing many members of this cast and production team becoming integral participants in future DST shows.