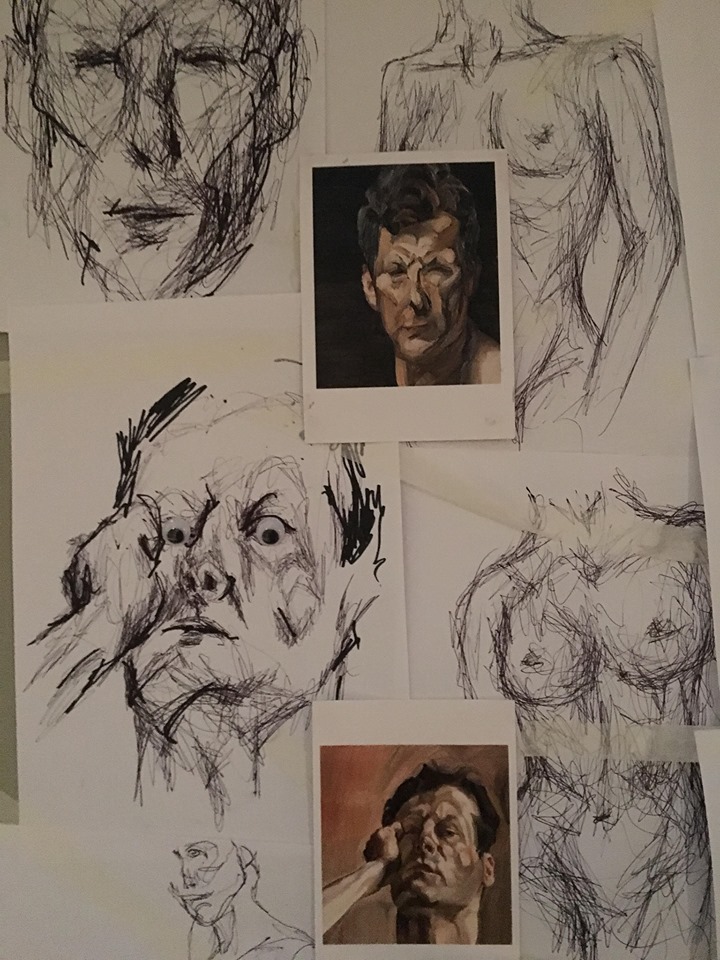 The sign on the door to the Kingsgate room reads ‘Warning: The play contains the following: Food (ham, chicken, bread*not gluten free), Swearing, Death, Violence, Nudity.’ It is only fitting that I preface this review with such a message- you ought to know what you’re getting yourself in to.

The play opens on two friends- Hanker (Jack de Deney) and Romm (Griffin Shelton) – discussing their attendance at a dinner party. A dinner party where they like an Aperol Spritz or two – ‘Aperol Spritzi?’. The discussion turns into a stream of incessant questions from an unconvinced Hanker, creating a fast-paced dialogue which sets the tone of the piece. ‘Are you conscious?’ meets the perfectly deadpan reply, ‘I’ll tell you on the way’ from Shelton. At the party, we encounter the solipsist Clover (Aaron Rozanski) keeping their dinner guests captivated with a sickening explanation of ‘fresh flesh’, waxing lyrical about the benefits of free-range human, and the difference in taste between all the human backgrounds. Rozanski receives solid support here from Sean Alcock and Odi Oladuji. When tragedy strikes and the human flesh prepared for that evening is no longer fit to eat, Kez (Eric Yu) is the dinner guest who can provide a solution. It is this first act of cannibalism and Clover’s psychological poison, which go on to affect Hanker and Romm in polar opposite ways. After coming full circle and facing another dinner party, roles and lines appear reversed, and a knife rests between the two friends- ‘What can I say? I want to eat you.’

Truly not for the faint-hearted, Alexander Cohen’s ‘The Human Flesh’ is disturbing, macabre, and mercifully just over an hour long. That isn’t to say the writing isn’t successful, nor the acting commendable. It is a brilliantly directed piece, dynamic and often fast paced to keep up with unfolding events. Most importantly, I feel it achieves its true aim- having the audience so uncomfortable, so on tenterhooks, that the tangible tension in the room feeds the performance just as much as the ham-human flesh. Existential philosophy plays a large role, and, as Cohen says, he takes inspiration from Samuel Beckett and Sarah Kane. The cyclical structure of Waiting For Godot is certainly echoed and used effectively. Skilful lines of the darkest humour illicit laughter from a hyper-aware audience. The audience, by virtue of the rooms layout, are thrust into the action close enough to harbour irrational fears of being the next meal. Besides the handful of fake limbs, this isn’t a play that uses lots of cheap tricks to get a reaction- there are no bags of blood hidden beneath clothes, no raw meat dangling from mouths, as the posters may suggest. However, the play seems to capitalise off the most horrific moment- the strangling of an almost entirely nude Kez- and it feels like a step too far. Not forgetting the bizarre moment when, with a cough, Kez picks themselves up soon afterwards to serve the platter of meat supposedly from their own body.

The staging is rather remarkable. The room takes the form of Hanker’s nightmare- plastered from ceiling to floor and across windows with manically scrawled drawings of human body parts, words in retraced black biro spelling out hate, confusion, terror- ‘Who’s talking?’, ‘You’ve done enough thinking’, and ‘I’m starving’- all on torn paper and pages ripped from books. It must have taken hours to set up. A dining table and several stools make up the simple set, with the audience’s seats lined around the sides and reaching to the back of the room. The lighting is very effective, alternating from a paradoxical golden glow around the dinner table, to a more clinical white light at times with Hanker and Romm, to darkness as Clover whispers his venom. Credit is very much due to the tech team here (Adam Carruthers and James Goodall).

It may sound crass to say this play is an acquired taste, but it is the absolute truth. The vivid detail of its content is enough to turn your stomach, and the interesting questions asked within the play, surrounding our worth and existence, are somewhat overshadowed by the grisly themes, rather than illuminated. However, it’s a successful horror piece overall, achieving just what any horror sets out to achieve- making you feel adrift from the comfort of your reality.

Buttered Toast’s The Human Flesh is on 4th-5th May at 8pm in the Kingsgate Room.