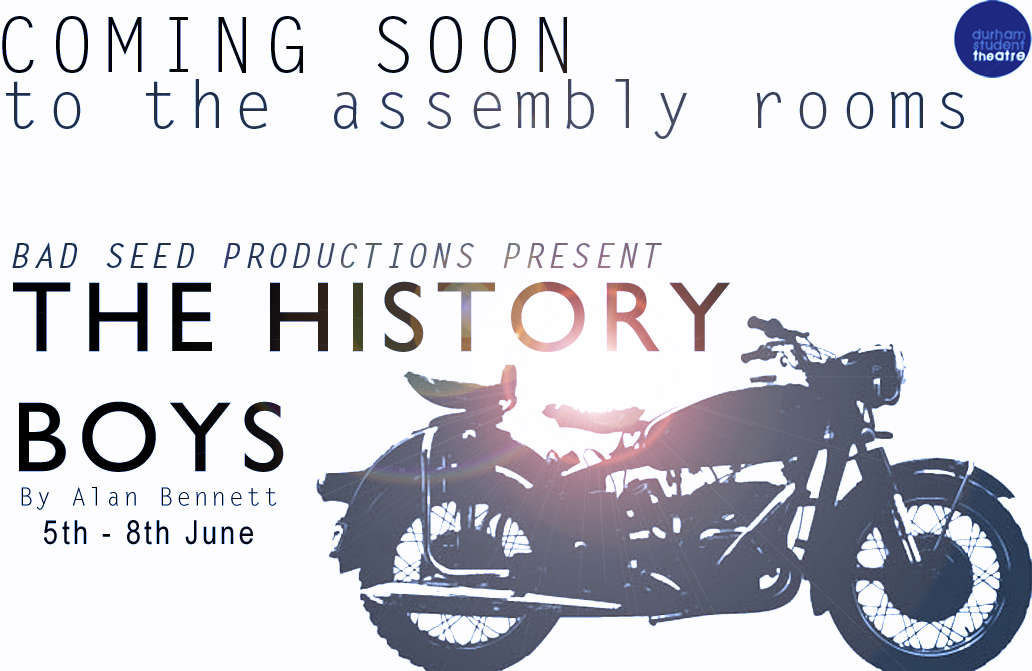 I confess: I was a History Boys virgin. I hadn’t seen the play, nor the film, and whilst, at first, I felt ashamed of such a declaration, I am in fact rather pleased, for it allowed me a completely uninfluenced approach to Bad Seed’s production. Unhindered by the bias many of the audience had as they entered the auditorium, I had absolutely no idea what to expect, and indeed, I was interested to see how the play broached that ever-touchy subject for Durham students: Oxbridge interviews.

We were greeted with shabby plastic chairs and a wall covered in posters and postcards that immediately told us ‘this is not a private school’, and gave the set colour and vibrancy, whilst also reflecting the teaching methods of Hector, one of the play’s protagonists. It was easy to note before the play had even begun that the plush and upholstered armchair was clearly reserved for the Head teacher. A partition restricted the action to just half the stage of the Assembly Rooms, which meant that the cast never ‘rattled’ about the stage and created a friendlier and close environment.

The performance opened on Charlie Warner as Irwin delivering a monologue, the brilliant power and subtlety of which was immediately juxtaposed by the jeering of the schoolboys as they entered for the first time into the classroom. Perhaps one of the only criticism in the opening scenes was the lack of projection and rushed speech of certain members of the cast, causing many of the comedy lines to be lost. The actors’ voices were often lost behind a clattering of chairs, and scene changes were often rather noisy. However, this failed to ruin to flow of the production, and there were noticeable improvements in the second act.

The rapport between the boys was fantastic; the quick-fire dialogue demonstrated their strength as an ensemble, and this was one of the greatest aspects of the production. Though a handful of actors had few lines, their physicality and facial expressions still delivered a convincing performance that supported the leads. The physical acting abilities of the actors were particularly revealed in the French scene, in which it was necessary that they delivered the message of the lines through their body language in order to provide comedy for those of the audience unable to understand French. Whilst Sam Horbye (Dakin) and Charlie Warner (Irwin) were both impressive and convincing in their interpretations, their flirtation scene was slightly unsatisfactory, for whilst it was hilarious, it lacked tenderness and vulnerability. Horbye’s bravado could have been tempered with a more subtle insecurity and nervousness, and Warner’s stiffness could have become more relaxed as he became comfortable with the situation. Perhaps director Morten Jacobsen wanted to focus upon the obvious awkwardness of the dialogue, however it has potential to be touching and affecting (not to mention sexual tension!) which I believe was sadly missed. Nevertheless, this did little to detract from the otherwise strong and interesting performances that both Horbye and Warner delivered in two equally challenging roles.

The stand-out of the performance was undoubtedly Callum Kenny as Posner. His meek physicality and facial warmth was immediately engaging, and led to him becoming the most sympathetic of the characters. Frequent songs allowed him to demonstrate his beautifully rich voice that amplified the warmth his character exuded. His final moments on stage formed the most heart-breaking; his crossed arms and legs as he sat facing the audience with a stare of subtle yet powerful sadness brought the play to a close with a deep level of sympathy, and was harshly juxtaposed by his former schoolmates, who surrounded him and still exhibited many of their boyish mannerisms. The subtlety of Kenny’s Posner was flawless and thus one of the production’s strongest attributes.

Will Hannam deserves particular praise for his nuanced portrayal of one of the most complex characters in the play, Hector. An easy role to overdo, Hannam’s understated yet carefully crafted character is a testament to his exceptional acting ability. His best scene was his breakdown to his pupils, perfectly and finely executed, which resulted in a stunned silence, and even a gasp, from the audience. The reaction of the boys here was also notable, their previous cockiness evaporating to be replaced with looks of meek and touching concern. Sophie Harrop delivered a convincing Mrs Lintott, whose most memorable moment was her monologue about women’s role in history, to which she gave enough warmth to still be personable, and enough sharpness in her tone to be formidable.

The costumes were simple but effective – the boys wore dishevelled school uniforms, which comprised of a white unbuttoned shirt, a red-striped tie and a black trousers. Irwin and Hector’s costumes were brilliantly opposed; Hector’s corduroy and bow tie, and Irwin’s smart, matching suit immediately encapsulated the differences in their teaching methods. The lighting was not overused but effective and enhancing. The faded light on the piano at the end both drew attention to Hector’s portrait and the instrument with which the students amused him, which added to the poignancy of a delicately executed scene. The white and blue lighting the opened the production also closed it, rounding off in perfect cyclicality. The lighting changes when the students performed to Hector added to the melodrama of the scenes, and these moments proved some of the most humorous of the entire play. Occasionally the lighting did not sufficiently light the actors, however this did not majorly detract from the action.

Although Jacobsen set himself a challenge by selecting such a famous play as his directing debut, his ambitious choice was a risk that paid off, and his direction led to an exciting, moving and hilarious production. I definitely recommend you take a trip to the Assembly Rooms to see The History Boys and experience first-hand one of the best productions of this academic year.