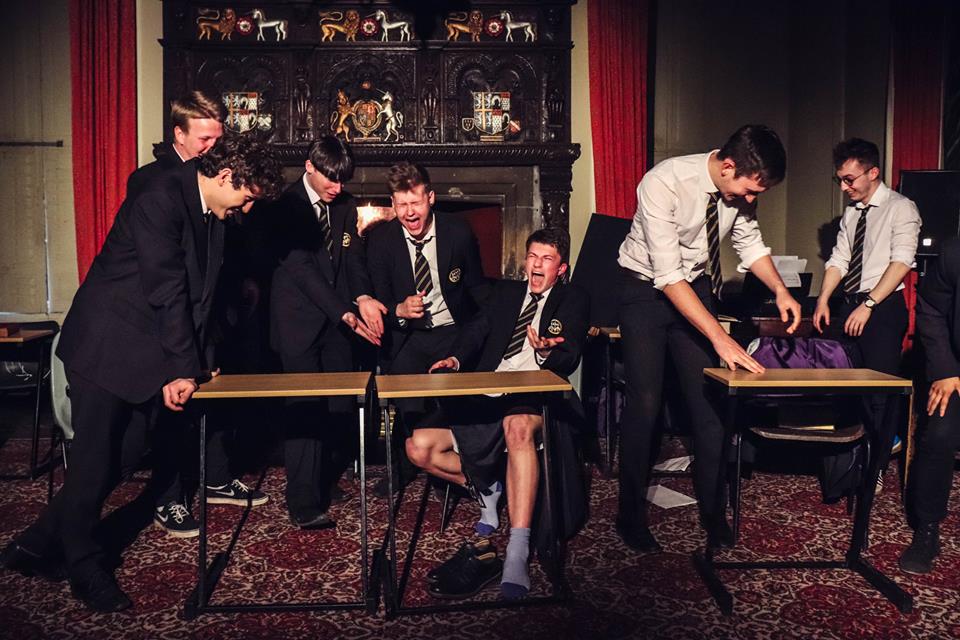 Providing some welcome respite from the current stress of exam season, CTC’s production of Alan Bennett’s The History Boys proved to be an absolute triumph on its opening night. Nestled away inside Castle’s Senate Suite, which served as the perfect backdrop for the school setting, CTC offered its audience a stunning performance of wit and emotion that at times left the audience in fits of laughter. Following a group of bright but unruly sixth formers as they prepare for their Oxbridge entrance exams, this performance calls into question the nature of education whilst also touching on other potentially sensitive topics, such as homosexuality, in an authentic and graceful manner, aided of course by the talents of the cast.

The setting was fantastic; at first look, the desks and chairs appeared rather simple, but the additional small touches such as the French on the chalkboard, the scattered books and the odd pen lid created the atmosphere of a well used classroom that seemed authentic and not too cluttered, as is often the risk when choosing to perform in an intimate space. In being so close to the audience, the actors’ space did seem rather limited, but in no way did it hinder their performance.

As for the performance itself, I was awed by the sheer level of talent that was displayed by the entire cast, they each committed themselves to their respective roles with such enthusiasm and determination that they really brought each unique character to life. Onstage, the acting never stopped; the cast’s reactions and interactions were consistent, believable and often delightfully funny. Despite some slight stumbling over lines, most likely due to first-night nerves, the dialogue – which heavily featured very specific academic language – was excellently delivered, with many exchanges between the boys and their teacher even being spoken in French! As such, the cast must be commended for their wonderful execution of dialogue – which I’m sure must not have been at all easy to learn – as well as their mastery of comic timing.

There were many light-hearted and thoroughly entertaining moments, such as when the boys would act out certain films for their teacher to guess and the occasional breaking into song – tunefully carried off by Alex Marshall – as well as the general onslaught of jokes, quips and one-liners that flew about the stage. But juxtaposed against these came more heartfelt moments, where the actors onstage revealed a more vulnerable side to their characters that came as a pleasant contrast to their joking naivety. One such example of a stunning emotional performance was Owen Sparkes as the boy’s eccentric teacher Hector; Sparkes threw himself into the role and delivered one of the most moving scenes in the play, so heartbreaking and genuine was his portrayal of Hector’s pain.

From a technical standpoint, the production team should be praised for their intelligent use of lighting, which helped to distinguish between who was speaking onstage as well as indicating a change in scene. Additionally, the music played briefly during the scene changes was well chosen to set the scene of 1980’s Sheffield, where the show takes place. The inclusion of music, from piano playing to the cast singing together also showcased the creative talents of the cast and heightened the poignancy of certain scenes, particularly at the end.

Overall, the entire cast and production team behind this performance should be truly highly commended for their outstanding commitment; as a result, they have pulled off a marvellously funny and moving piece of theatre that really showcases the extraordinary calibre of the performing talent here at Durham.

Be sure to catch this electric performance by a stellar cast before it closes on the 29th April – consider it a guilt-free break from revision; after all, you are going back to school!