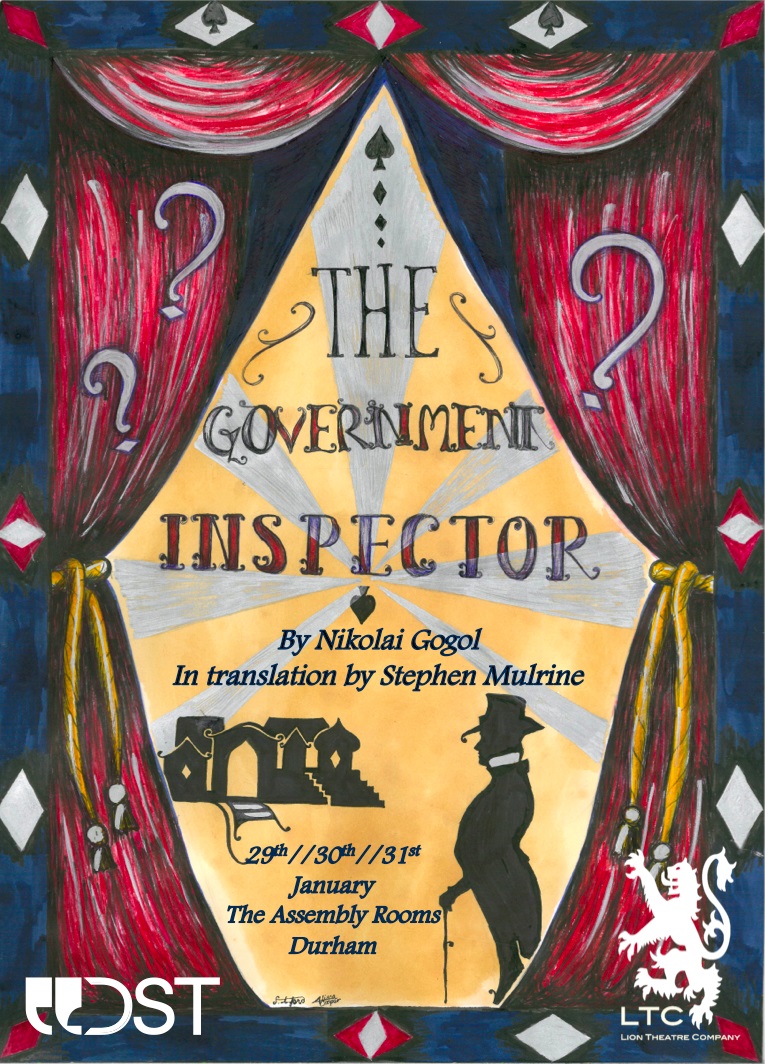 The Government Inspector, originally written by Nikolai Gogol in 1836, was brought to life last night in Lion Theatre Company’s enigmatic production of this spirited Russian satire. The company have had previous success with their production of Posh, which received excellent reviews and sell-out performances. Tyler Rainford stepped up to the plate to direct this production, and he has done the company name justice, creating an exciting, upbeat and farcical piece of theatre.

The first thing you notice when the lights come on are the eye-catching appearances of the actors, and indeed visual stimulation is of vital importance to the production. Congratulations are in order to costume designers Alissa Cooper and Shahnaz Ford who managed to create a fantastic array of costumes and stunning facial make-up which worked so excellently with the feel of the play. Samuel Arrowsmith (The Superintendent) must be praised for his well-calculated facial exaggerations which played on his make-up and were so amusing that he didn’t need many lines to be noticed.

The main attraction of the play however was undoubtedly the stunning choreography of the actors. Throughout the performance the audience was treated to an array of synced actions and reactions, executed to perfection, that raised the standard of the play above the level of a student production. This focus on physical theatre did mean that the contents of the script weren’t conveyed as well as they could have been, with the first half dragging slightly due to a few unnecessarily long scenes and therefore failing to fully captivate the audience. A slightly more astute, sparing selection of lines would have helped the play keep pace. However, the second half was much faster paced and once again the choreography made up for anything the script lacked.

As to be expected, there were a few mistakes due to first night nerves and a tendency to rush through lines meant that some of the script was lost in delivery, but none of this significantly affected the enjoyment of the play and are certainly problems that can be overcome in later performances. In general, all the actors showed confidence and capability with their roles, grasping the significance of the lines and giving an amusing voice to the corruption and vices of the characters. Shaheen Ahmed-Chowdhury (The Mayor) delivered a fantastic performance, encapsulating the dual grovelling and scheming nature of his character with brilliant humour that had the audience in fits of laughter. The double act of Helen Fitzmaurice (Bobchinsky) and Alicia Pemberton (Dobchinsky) also deserves special mention for their wonderful on-stage chemistry and comic timing.

This traditional farce of deception and corruption in Russian society has been amusingly adapted to produce Durham’s The Government Inspector and any fans of physical theatre, satire or just good acting should definitely go see it while you still can.