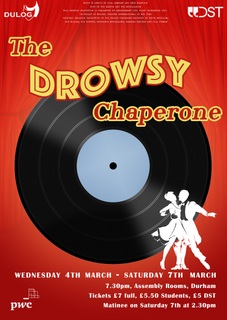 “catch this performance if you want some clever, light entertainment”

The Drowsy Chaperone is definitely a show that takes some getting used to, but once you do, it is a thoroughly enjoyable and absorbing experience. The first ten minutes or so seem a bit forced, the audience does not fully understand the form and as such some of the jokes fall a bit flat. The turning point is the introduction of the production of The Drowsy Chaperone, when it becomes increasingly obvious that the musical is a blatant satire. After this point, the performance transforms. I went from being slightly underwhelmed to completely wrapped up in the musical within a couple of minutes. The size of the audience really did not represent the extraordinary talent on display, not to mention a very amusing and subversive musical. This is the perfect distraction from summative season – lighthearted and guaranteed to cause you a few laughs.

The framing narrative seems restrictive at first, but becomes less problematic and begins to really add to the comedy of the musical. Additionally, the framing narrative allows the musical to be mocked and questioned – making a poor, overplayed original musical the basis of a hilarious commentary on the whole musical genre. This isn’t your typical musical and is all the better for it. The songs are the sites of great comedic value, in particular “Love is Always Lovely in the End’ and ‘Bride’s Lament’ for their utter absurdity. In the former, Mrs. Tottendale (Ros Bell) gives examples of great lovers – Romeo and Juliet, Henry VIII and Anne Boleyn, and Adam and Eve – completely oblivious to the fact that the butler (a typical and satirical presentation of the traditional, stiff upper lip performer) and the audience are questioning her judgment on love based on these tragic presentations. This song cleverly mocks the presentation of love in musicals, focusing on an unobtainable or ultimately detrimental love. The ‘Bride’s Lament’ also mocks musical songs but in a different way, with The Person in the Chair explicitly commenting on the weakness of the lyrics.

The Person in the Chair (Ellie Jones) quickly settles into her role, commenting on the action of the musical by providing (mostly) hilarious sarcastic quips. She manages to turn quite contentious parts of the musical (e.g. its casual racism) into something funny by highlighting and then mocking it. She also manages to present a character, rather than just a narrator, with a back story and psychological complexity. There are comments on her mother, her absent father and her failed marriage all interwoven into story. She uses The Drowsy Chaperone as a distraction, and the audience is just as immersed. Her performance has a different dynamic due to the fact that the commentator is a woman rather than a man as is the case in the original performance – in some ways it seems to be an almost unimaginable role to be played by a man after seeing this performance. Jones was perfect for the role, combining the wistful whimsical nature of the character with cutting sarcasm and wit.

The other stand out character in the performance was undoubtedly Aldolpho (Charlie Keable), the self-professed ladies’ man. I would seriously be interested in a spin off show focused solely on Aldolpho, that’s how much I enjoyed Keable’s performance. He seemed to be effortlessly hilarious; you really did forget that he was acting, half expecting him to be proclaiming “I’m Aldolphooooooo” across the Bailey on the way to lectures. There was something about every performer that I liked, and particular mention should be played to Jen Bullock (as Janet van de Graaf) for her amazing dancing. My favourite scene (despite the lack of Aldolpho) was the musical number “Show Off”. Bullock’s stage presence is undeniable, something that she exploits in this routine to considerable success. The un-apologetic theatricality of the routine is hilariously ironic in comparison to the sombre lyrics “I don’t wanna show off no more”, and of particular comic intensity and purpose is the encore, motivated by the casual comment “I’m surprised she didn’t do an encore”.

The performance is incredibly slick, not just in terms of the cast but also the way in which the band and lighting complement their action. The band should be particularly praised for the “Cold Feet” song in which the stressed beats fall at the same time as the on-stage tap dancing. The music had a distinctively cinematic style, keeping pace perfectly and truly complementing the action on stage through often-complicated musical arrangements. The onstage singing was of a consistently high quality – there were occasional issues with flat notes or mikes being turned up a bit too loud so that audibility was restricted, but these were the exception rather than the norm. The staging of the play was also particularly effective. Of particular note is the use of freeze-frames for when the record is paused and emphasis is placed on the Person in the Chair.

My advice is to catch this performance if you want some clever, light entertainment this week – you can’t even use the excuse of too much work, it’s short so you’ll be home by ten.