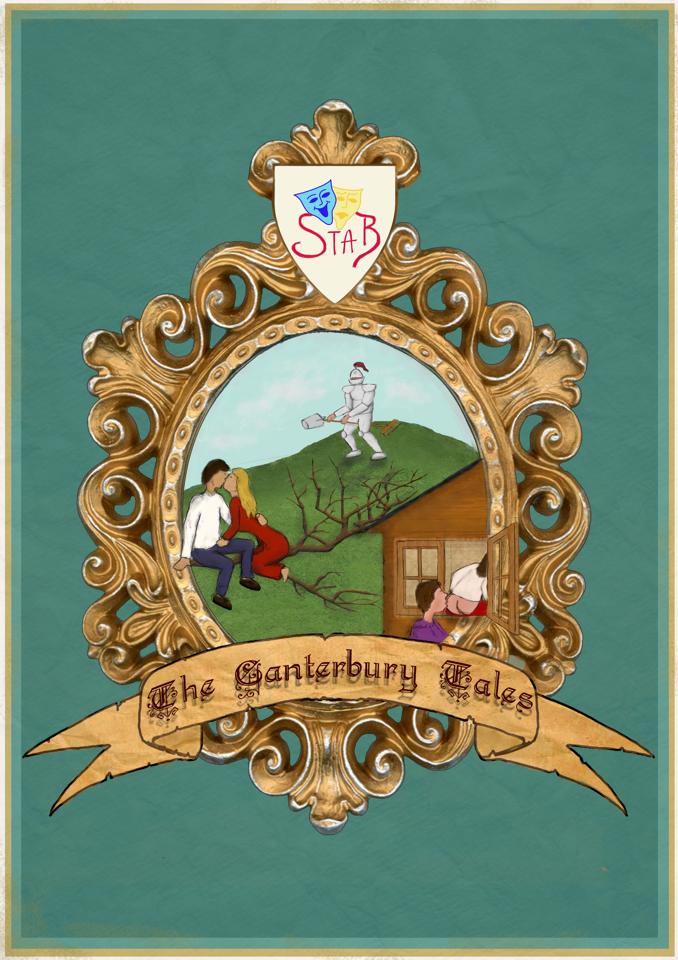 “an evening of light entertainment”

This telling of The Canterbury Tales, an adaptation for a modern audience as written by Phil Woods and Michael Bogdanov, provides an evening of light entertainment from the Society of Theatrical Arts at Butler (STAB). Eight of Chaucer’s tales are performed through a mixture of narration and recreation and appear to the audience as entries for ‘Annual Geoffrey Chaucer Canterbury Tale-telling Competition’.

We begin with Anisha Solanki, the M.C. of the competition introducing the competition’s candidates while trying to keep the rowdy Miller (Will Sinclair Marshall) under control, but deigning that he may tell his Top Ten of Medieval (really quite) Dirty Jokes scattered throughout the evening in the run-up to his own bawdy tale.

Anisha even sang us a song or two during the evening, as did Rosie Hodsdon while narrating the Franklin’s Tale, Rahul Ravi in his wooing of Alison in the Miller’s Tale, and Sophie Missen as Molly in the Reeve’s tale. These songs were mostly unaccompanied and quite beautifully directed; the fact that the singers didn’t always have the strongest of voices was unimportant to the charm of the action. Rosie’s singing for the Franklin’s Tale gave the tale the perfect Chaucerian balance of humour and drama. The mysterious guru (Rahul) who made a particularly spectacular entrance, and Will Miller running off from the courtly dance scene were light-hearted comedy while Rosie’s moving song and the tragedy of Dorigen’s (Bryony Renshaw) story contrasted harmoniously to create this balance.

The Wife of Bath’s Tale is arguably the most famous of Chaucer’s stories. Monique Dabdoub was a success as the hag and James Aitken gave a fun interpretation of the ne’er-do-well knight – his over-the-top reactions to the hag’s transformation fitted the lewdness of the tale very well. Hannah Burley made a lovely Wife of Bath too, giving big winks to the audience, and her little “call me” gesture in her role in the The Reeve’s Tale was spot on. Angelica D’Oro was similarly comical as May in the Merchant’s Tale where her elderly husband goes blind and she has an affair with his servant right in front of his unseeing eyes. Due to the space available at Ushaw the pair are able to flee up the spiralling staircase when January’s – May’s husband – sight is restored and he catches the pair together. Despite this good use of space there were some problems with staging decisions in other tales – at one point in the Knight’s Tale two characters were lying on the floor during the action making them invisible to anyone who wasn’t on the front row.

Bryony and Carl Makin deserve special mention for their roles in the Merchant’s Tale as Pluto and Proserpina, the meddling fairies at the bottom of the garden, charmingly pointing tiny magic wands at each other in gesticulation. This fairy team were also producers and assistant directors to Carleigh Cartmell. Little details like these tiny magic wands and Palamon (Katie Grieg) and Arcite’s (Ram Gupta) hobby horses in the Knight’s Tale that show the passion and hard-work that the team has put into this production and making each story unique.

The is alongside the work of set designer Emma Lee, who had her work cut out for her with seven individual sets to sort out. However, the setting was arguably one of the best parts of the play as each room created a new and distinct atmosphere for its story. The creation of John and Alison’s house in the Miller’s Tale was particularly admirable; the stage is filled with arches with a balcony and a window (with necessary curtain) as well. This tale also made some of the best use of props; the plastic baskets used for the flood escape mechanisms Nicholas (Angharad Philips) insists upon were very well chosen. The image of Mark Bate as John, Alison’s oblivious husband, cheerfully swinging back and forth in his little plastic basket was quite adorable!

I’m not claiming this to be the show-stopping event of the year but it is a very pleasing evening of storytelling, well worth a trip out. STAB balances a sense of humour sometimes akin to that of pantomime with a genuine skill and passion for retelling these centuries-old tales. And if you need an extra push to get you all that way to Ushaw College, there’s free biscuits and squash at the interval.