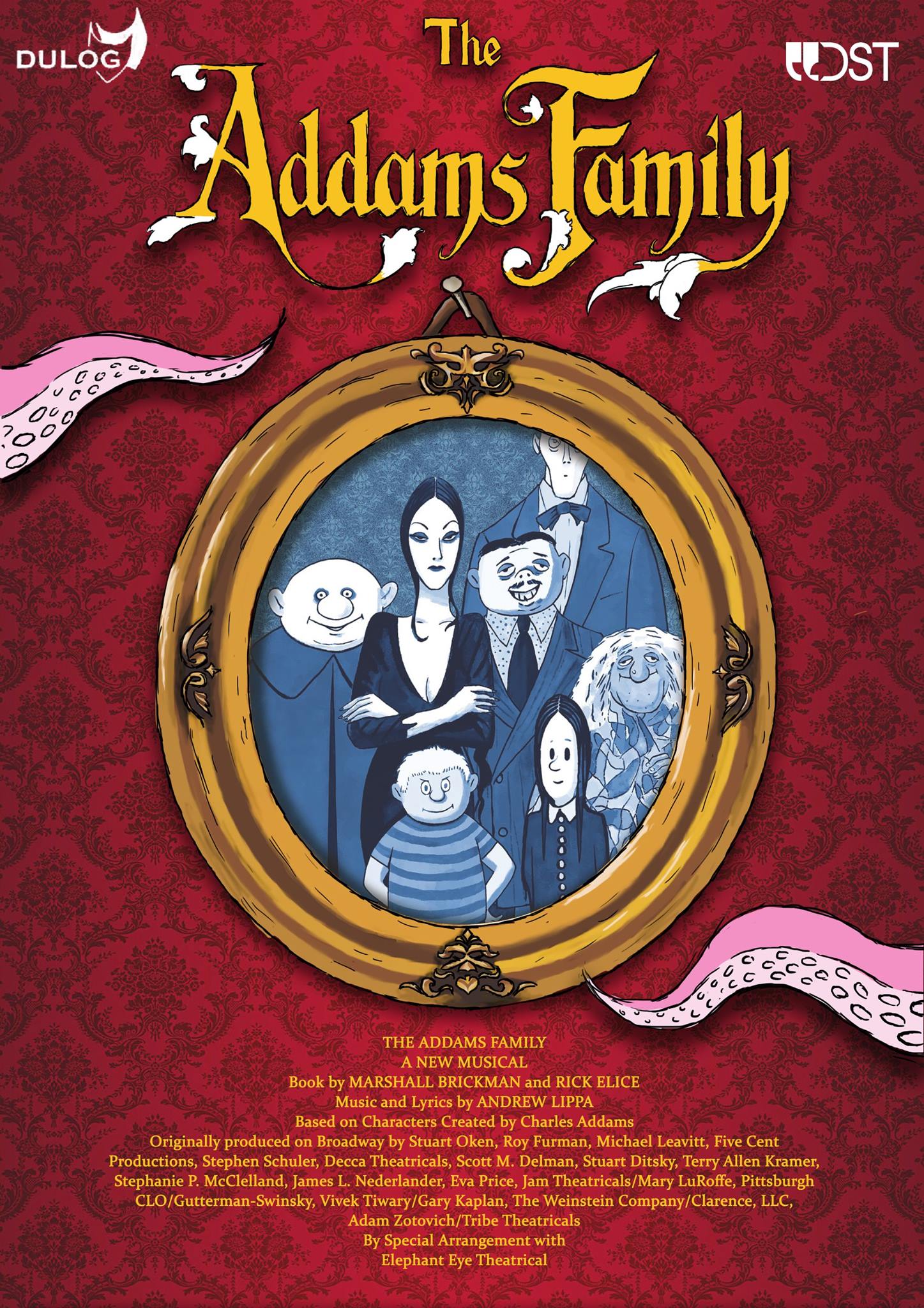 ‘a resounding production in every sense of the word’

Disclaimer: I am not in general a musical kind of person. I was slightly apprehensive and frankly a little scared about going to see DULOG’s The Addams Family, but by half way through Act 1 I had been converted. The story is one that is not perhaps a household tale, but DULOG’s performance was effortlessly familiar and warming: an eclectically gothic family accidentally calls upon the ghosts of their ancestors who find themselves “locked out” their graves, unable to return until love triumphs. Luckily, the Addams’ eldest daughter Wednesday is looking to seek her parents’ blessing for her engagement to the frighteningly normal Lucas. A dinner party between the two families follows, chock full of awkward faux pas, revealing secrets and family drama. Director Charlie Keable’s best achievement is perhaps how within minutes the characters ‒ instead of seeming outlandish ‒ appear incredibly familiar; the audience was wrapped up in even the most trivial of their pursuits and quirks by the fade of the first scene.

The opening number was snappy and charismatic ‒ it’s rare to have most of the main characters on stage for the first scene, yet it gave the musical the volume and energy it needed to sustain itself throughout the next two and a half hours. I can’t overstate how important it is to set the scene with a strong opening and DULOG almost brought down the ceiling, teasing the audience with the hugely powerful voices of each actor through a brief solo each. At this point it would have been very easy to portray the Addams family as overly gothic and macabre, but the constant undercurrent of humour based on real, everyday family problems that underscored each line of dialogue complemented it very nicely, as did the tastefully minimalistic sets which focused the audience’s eyes quite rightfully on the actors.

The high point of the production had to be just how likeable all the characters are; a rare feat in such a challenging and multi-faceted production. Bróccan Tyzack-Carlin’s portrayal of Gomez was bumbling and affectionate – his scene consoling his daughter almost brought me to tears, whilst his conflict over whether to tell his wife a secret or not was handled with comic finesse. The sassy, gothic elegance of his wife Morticia (Sadie Kempner) paired well with Gomez’s more slapstick comedy. The two sustained their charisma very convincingly the whole way through which was impressive given how many scenes they shared together. Wednesday (Jennifer Bullock) appeared a little too cheerful for someone who shoots pigeons with crossbows and tortures her little brother in her free time, but more than made up for it with an incredible voice that was consistently on pitch. It took me a little longer to warm to Gomez’s brother Fester (George Baker), but his hilarious ballad to the moon at the opening of Act 2 was utterly charming. Special mention must also go to Sorrel Brown ‒ whose transition from innocent Alice to her crazy alter-ego was both mesmerisingly dramatic and full of pathos ‒ and also to Harry Adair, whose zombie butler Lurch never failed to elicit a laugh whenever he even twitched.

The chorus were brilliantly in sync in their performance as the quirky, undead ancestors of the Addams family, even if they were slightly less energetic than the principal cast. I particularly enjoyed the scenes where the ghosts became part of the backdrop and interacted with the dialogue, much to the ignorance of the characters. I would have liked to see more of them, especially since their costumes were so thoughtful and highly detailed, with each “ghost” being from a different era. Choreographers Will Emery and Kennedy Cassy should also be very proud of their achievement: each ghost danced similar moves but in the style of their particular era ‒ a brilliant nuance which only added to already very slick routines. The tech was also impressive: the green lighting during the dinner party scene as Alice inadvertently drank from a poisoned cup during a rather sinister ‘Never Have I Ever’ style game made the garish whiteness of the ghosts in the background stand out all the more as they hovered over the fate of their successors.

All in all, a resounding production in every sense of the word and I wish them every success in the rest of their run.