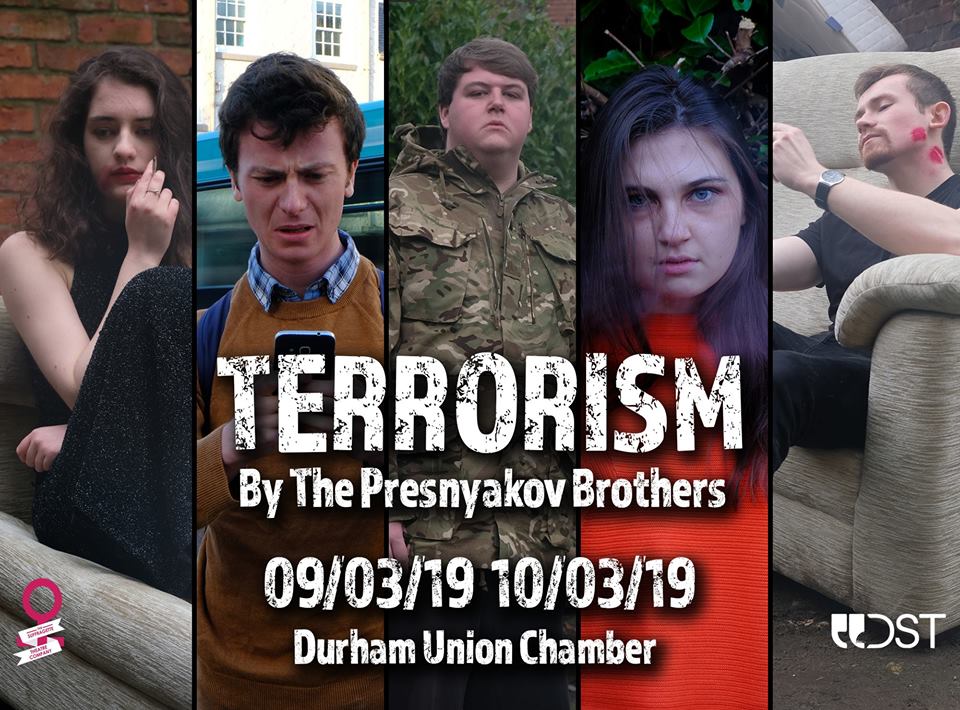 Written in the aftermath of 9/11, Terrorism is a crescendo of a play that could on the surface simply involve 6 short scenes, all seeming to lack both a start and finish. However, as the play continues we realise that every scene is simply a snapshot of many adjacent lives. The play explores how the distance between us can warp and twist our perceptions and behaviours, even towards those who seem the closest. And although there may not be any media-worthy terrorists doesn’t mean there isn’t visceral horror, the power of which seems only stronger for the fact that it is never quite onstage. Rape, murder and suicide are all touched upon to greater or lesser extents and are thrown in as freely as small misdemeanours: making fun of others and other displays of callousness and indifference.

Throughout the play all the actors perform various roles across the six scenes. To begin with, Tom Murray is told that the airport is shut due to a bomb scare. After sitting down between two other stranded fliers, played by Helena Baker and Keir Mulcahey, the three get into a conversation. At first it isn’t clear whether the acting is slightly overdone, with the whole thing feeling ever so slightly surreal. However, as the play progresses it becomes clear that this slightly surreal, larger-than-life style of performance is very deliberate and, more importantly, effective. Whereas the first scene is a bit odd and amusing in places, the next, with Jack De Deney and Eleanor Storey, is perhaps the most powerful scene of the play. It suddenly accelerates the narrative, with both actors giving distressingly raw performances.

I feel that it is also worth commenting on the variety of the roles that the actors played. Thomas Bracewell is as convincing as a simpering, slightly pathetic office worker as he is when barking out orders as a police captain. It is this kind of juxtaposition of sitcom level humour and staggering violence that makes Terrorism so gripping. Of course, smart use of tech adds to this tension. In particular the use of a low white noise is one of the many factors which add to the emotional impact of the actors’ performances. Even the set and stage design is curious, with everyday items up to and including a kitchen sink lay scattered, seemingly at random.

Terrorism is not light-hearted but I suspect you had already guessed as much from the title. What it is, is unsparingly brutal and raw as it is surreal. First performed in 2002, so soon after 9/11, the play’s initial impact must have been huge. But as time has passed the strength of this play doesn’t seem to have diminished at all. It grabs you emotionally, but is also thought-provoking and forces us to ask some slightly more uncomfortable questions of ourselves. Terrorism is not what you would typically find in the Durham Union Chamber, but this doesn’t mean it is an unwelcome change.

Terrorism is on at 3.30pm and 7.30pm, Sunday 10th March in the Durham Union Debating Chamber.