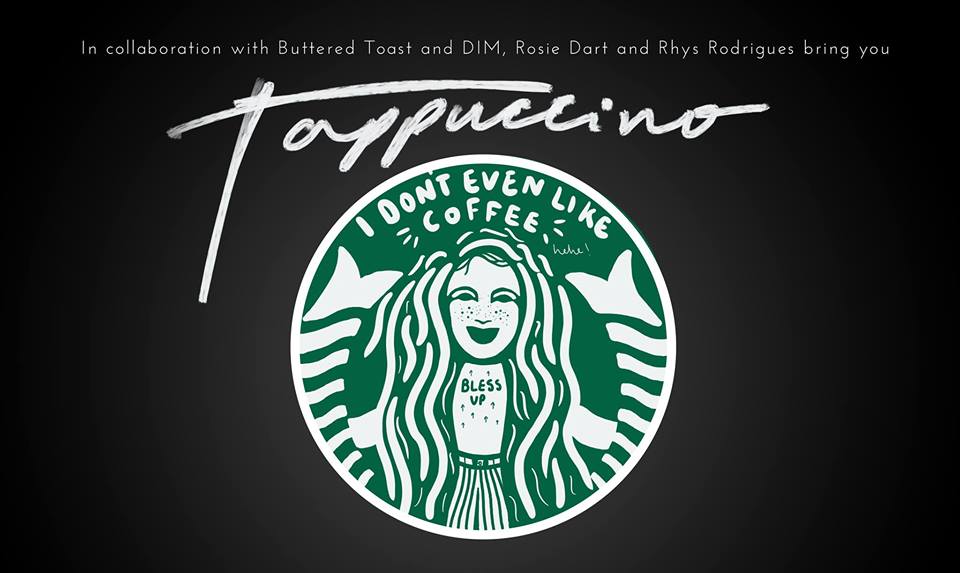 Tappuccino is a self-described “fringe-style” piece of original theatre from the minds of Rosie Dart and Rhys Rodrigues which promises to be fun, vibrant and odd (in the best way). Somewhat atypical of traditional theatre, this short but well-executed production leaves the audience laughing and wanting more.

Immediately what strikes me about this play is its location, being performed in Cafédral; a popular spot for students and locals alike. It makes for the perfect setting of the play’s Swiss coffee shop, as well as creating a comfortable atmosphere which plays well into the interactive eccentricity of the performance. Additionally, serving coffee at the event acted as a morbid punchline considering the bond we later feel for the lead character: a ‘literal’ coffee bean.

Immediately the energy of the play is bold and exciting, with apt use of audience participation and interaction which sets the tone of the play and engages its viewers. Continued use of voluntary participation throughout really creates a personal atmosphere and will make every night of this performance truly unique.

Rosie Dart, co-writer of the show, gives a strong performance in her lead role, showcasing talents in acting, dancing and singing as well as a charisma and ability to improvise which leaves the audience laughing throughout. The play incorporates various techniques to present the decidedly odd and strangely moving story of the much-loved coffee bean, particularly noteworthy is the use of shadow play to represent a transition from one location to the town of Gstaad where the story centres. The tap dancing which inspires the title is well done and used to great comedic effect.

The only other performer, co-writer of the show, Rhys Rodrigues, plays the role of the ‘BaRHYSta’. A role that, while only small, compliments Dart’s performance perfectly and successfully joins her in drawing plenty of laughs from the audience. It should also be noted that on top of his role, Rodrigues also plays piano to accompany Dart and compliment certain scenes. The music, both instrumental and vocal, is well-written and perfectly reflects the energies and emotions of all the scenes, cementing the play’s fun atmosphere.

Credit is also due to technical director Alok Kumer who uses lighting of various colours to punctuate each scene and successfully translates the mood. Kimran Rana as Associate Director completes the small team who bring the production to life, and deserves mention for her help in translating the vision of the project into its successful reality.

Despite having a small team, Tappuccino makes simplicity work in its favour and does the impossible in bringing a literal coffee bean to life. Such a fun and unique project demonstrates all that is good about student theatre, and whilst it is short, it is something special.

Tappuccino is on at 8pm, Saturday 9th March in Cafédral.