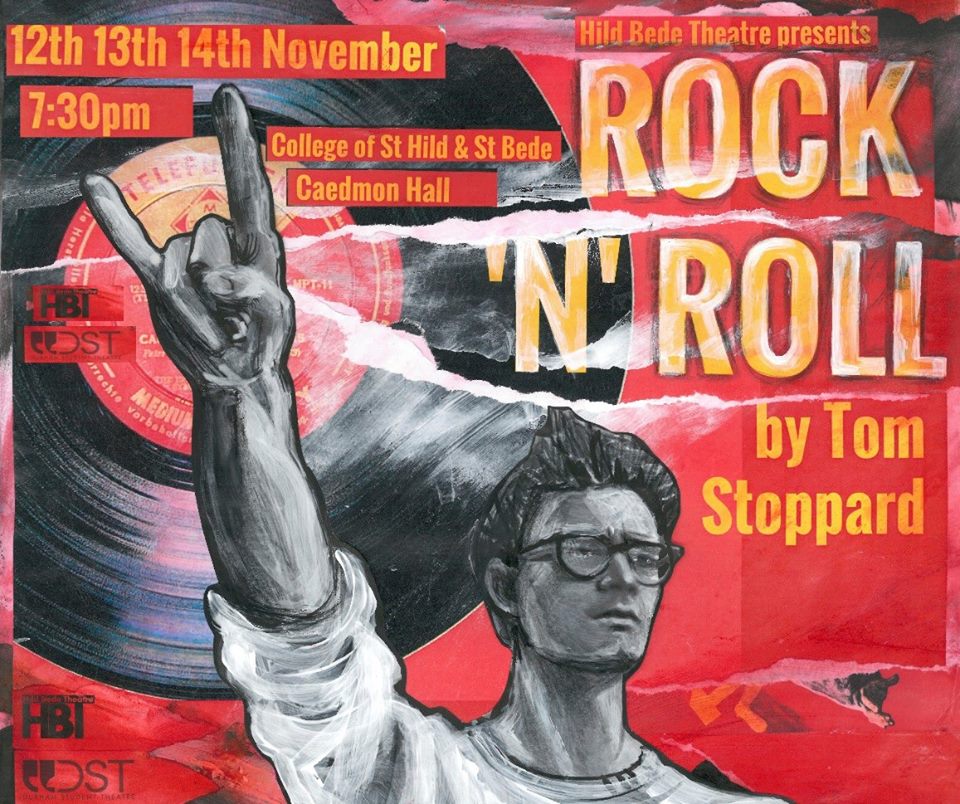 It’s only rock and roll ‒ but whilst Cambridge doctoral student Jan can’t get enough of it, the authorities in Spartan 1960s Czechoslovakia don’t like it at all. Thus runs the backbone of Tom Stoppard’s fiercely intelligent 2006 play, oscillating between the quiet academia of Cambridge and the feverish revolutionary spirit of Prague between 1968 and the Velvet Revolution of 1989. Of course, this being a Stoppard play, it’s a lot more esoteric than that, and anyone unfamiliar with the events described may find themselves feeling ever so slightly clueless. Therefore, Hild Bede Theatre made a risky choice of play, and whilst their bravery and innovation must be commended, I feel that the complex nature of the material stops this production from realising its full potential.

The most striking feature of HBT’s production is the aesthetics. Costumes in particular are breathtaking in their attention to period detail from head to toe, and if the 1990s sections felt a little safe, the 1970s are a glorious mustard-coloured, flared-trouser, turtle-necked highlight. It was a pity that the programme didn’t credit either the costume or set designer ‒ I would have liked to be able to congratulate both by name. Other aspects of the production, however, lacked this meticulous touch. Certain props choices were somewhat careless ‒ such as a “Classics” textbook which had ‘Legal Studies’ emblazoned in huge white letters across the front, or a copy of the Northern Echo being used as a local Cambridge newspaper. Although easily rectifiable, these minor niggles did take some of the shine off the (otherwise breathtaking) set. Pedantic, I know, but it was a shame to see a production that can otherwise be commended for careful and well thought-out design to fall down on the small details, arguably the easiest elements to get right.

Nevertheless, beautiful though the set may be, it did present the cast with some practical problems. I will preface this by saying that I totally appreciate that Caedmon Hall is a far from ideal space, particularly for a play such as this one which is largely centered on small-scale domesticity. Objectively, having what is essentially an entire theatre at your disposal should be a real gift for a college theatre company, but Caedmon is cursed with what might be termed ‘challenging’ acoustics and the sheer scale of the place can easily dwarf actors. Director Ed Wheatly has clearly thought outside the box, and his use of the space available to him is unconventional and creative ‒ with just an improvised tiered apron, a bench and some wallflowers, an effective garden is born. However, within this tiered arrangement, space for the actors to move around in was minimal, giving the garden scenes a stifled and stilted atmosphere which belied the purpose of characters escaping to the garden in the first place.

Stoppard is a difficult taskmaster for any actor. His scripts are an intellectual minefield, peppered with niche references which very few actors (or indeed audience members) will ever be able to appreciate as fully as Stoppard himself. In the case of this production, some of the more informative scenes (the Prague scenes in particular) would have benefitted from clearer diction and slower delivery ‒ I’m still not sure that I totally understand the turbulent political zeitgeist that the play explores and I would have liked to have come away feeling more enlightened. Claire Forster, giving a passionate and brittle performance as Eleanor, seemed to have the best grasp of the raw material, consistently audible and finely judging the Hall’s aforementioned acoustic pitfalls. Tristan Carman gave a standout performance as Max ‒ fantastically curmudgeonly but leaving enough emotional depth to make his scenes with Forster and later scenes with daughter Esme (Steph Sarratt) almost unbearably poignant. A particular favourite moment was his admission that his wife’s cancer had returned: the quietness and poise of Carman’s delivery was extraordinarily powerful. Unity Haggard (Lenka), despite little stage time, was another strong performer. The tutorial scene between Haggard, Forster and Carman was one of the first where I felt that every actor was comfortable in the space and with their lines, and was all the more enjoyable to watch because of it.

The Cambridge scenes felt generally more polished and secure than their Prague-set counterparts, however I think first night nerves or line issues may have played a part here and so I’m confident that the gap between the two will become less visible as the actors get into the swing of their run.

Rock ‘n’ Roll is a tremendously difficult play to stage and to perform but, despite a few first night teething problems, HBT should be proud of themselves. The use of the space is pleasingly creative, set and costumes are gorgeous and the ensemble boasts some terrific performers. Tightening up on cues and articulation will work wonders in elevating the production from good to great, ensuring that the production sounds just as good as it looks.