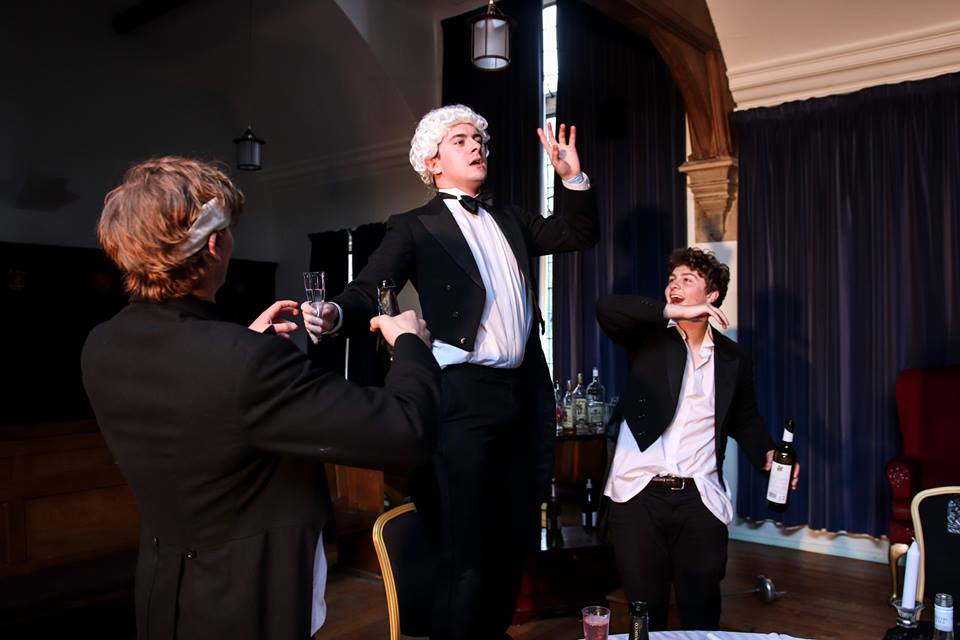 Based around Oxford’s Bullingdon Club, Posh follows ten young men engaging in a night of ‘riotous’ behaviour which to them is their birth right, but it is soon shown to the audience their views and actions are as outdated as the club.

There were certain nuances of the production that made the play feel out of time and obsolete. The Durham Union Chamber had that old-fashioned, traditional feel to it with which the Bullingdon Club is associated. With the audience surrounding the cast members in this setting, it really felt as if you were witnessing a meeting of the club. A clever touch was the slightly outdated pop music utilised by the production Rather than the contemporary feel it was meant to give, it showed them to be rather disassociated from the present and living in their past glory.

As an ensemble there wasn’t a weak link within the cast. They all fully embodied the rich entitlement felt by the Bullingdon Club. Initially this was slightly amusing and made them uneasily likeable, but they all gradually demonstrated themselves to be morally degenerate in a way which the audience knew had been hiding in them all along.

In terms of standout performances, Owen Sparkes’ Hugo really captured the sense of grandeur the members believed themselves to have. He had an earnestness about him which wasn’t as openly nasty as the other boys, which was almost more sinister. Similarly, Hamish Lloyd-Barnes as Leighton subtly portrayed the seemingly lesser evil of the whole group, often acting as a voice of reason. Eventually though, he showed himself to be as complicit as the rest and to have the slimy and creepy interior the same as them. It serves to remind the audience that perhaps those type of people are the most dangerous, although claiming innocence and seeming to have moral decency, when placed amongst the crowd, they will always follow and sometimes may even be the leader.

The play built up really well, the pace was consistently entertaining. Even when there was a humorous moment it was developing the characters, their attitudes or what the club meant to them, further unsettling the audience. Whilst their attitudes were jokes and comments in the first act, by the second their attitudes had become explosive actions and their humour manifested into a real-life situation, which was incredibly well-choregraphed and managed to make the consequences feel violently real. Although John Broadhead’s landlord character attempts to stand up to them initially, it feels weak and pointless against the money and power of the characters, and the audience is filled with a sense of dread.

This play was one of the most well-acted and well-constructed plays I’ve seen in Durham and I’m hoping this isn’t because the actors were playing versions of themselves. By the end, as elitism reigns and the consequences fall on the little man, there is a sense of hopelessness. These attitudes, these actions and beliefs will continue and there’s nothing the audience can do. As Jack Palmer’s Jeremy proclaims at the end, “the dinners are just the beginning”. Whilst a technically fictitious play, the ideas are real and the audience knows it, which is perhaps what makes the play so real and terrifying despite the outdated attitudes of the characters.

Posh is on at 7.30pm, Wednesday 20th June- Thursday 21st June at the Durham Union Chamber.