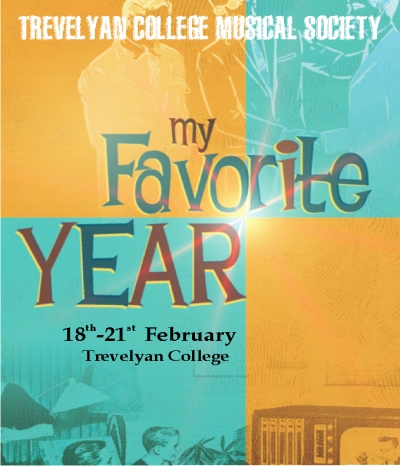 “the band perfectly compliments the action on stage, adding to and enhancing the drama that unfolds to the audience”

Trevelyan College, as the stereotyped musical college has a lot to live up to in terms of not only the cast but also the band members. An audience expecting great things would not be disappointed- the band perfectly compliments the action on stage, adding to and enhancing the drama that unfolds to the audience.

There is something remarkably unique, sadly, about a musical in which every character can sing. In this production, they do sing and do so very well. There are definitely no Russell Crowe types in this production, every performer had their own merit, and none more so than Will Emery in his portrayal of Alan Swann, the drunk, washed up film star. He resisted the temptation to play Swann as a two dimensional caricature- focusing not on the obvious issue of alcoholism and instead on the dependencies and attachments that he has to his estranged family. Yet, more remarkable than his portrayal of Swann as distinctly human is the quality of his singing voice, imbued with power and projection, it’s arguably worth the ticket price just to hear him sing. The raw emotion portrayed by Emery is not only deeply affecting and emotive but it should be at odds with the more comic and lively aspects of the play. In the wrong hands this could be the case, but TCMS catalogues the shifts in mood so carefully and so faithfully to genuine human experience that it adds to the believability rather than detracts.

This is not to say that the rest of the play is without merit by any means. The narrator of the play, Benjy Stone, as played by Nick Denton is refreshingly a narrator that mediates on his own flaws. He comments ‘maybe I remembered it better than it was… or maybe that was exactly how it happened’ throwing the whole basis of the play into the air. Rather than undermining any message of the play, I think this reinforces the idea that perception is just as important than reality itself. In fact, the idea of self-perception and realisation runs through the whole play and is perhaps shown best through the awkward relationship presented between Benjy and K.C. Downing (Annie Davison). Davison puts in a fantastic performance as the slightly awkward, goofy assistant, providing a counterbalance to the ‘celebrity’ characters. Her portrayal is intrinsically likeable, there could be the tendency to overact but Davison seems to strike the balance perfectly, working off Denton’s Benjy not as a polar opposite but a complimenting half. The two have undeniable on stage chemistry, with the whole ‘will they/won’t they’ format causing gut wrenching suspense for the audience.

As much as the audience is rooting for a KC and Benjy relationship, another double act well and truly stole the show. The partnership of Alice Miller (Sadie Fitch) and King Kaiser (JJ Bute) provided much of the comedy in the play. Fitch’s portrayal of Alice as a headstrong, feminist woman is comfortable, confident and ultimately very commendable- a particular note should be made about her comedy gag scene towards the end of the play but she does give a consistently funny performance filled with witty one liners and fantastic stage presence. Bute is equally confident on the stage, he plays Kaiser as if it is the role he was born to play, effectively evoking real anger, marking him out as having formidable stage presence.

There is not one character that is in any way unlikeable, and indeed particular praise needs to be given to the chorus as a whole. The choreography (as seen over by Olivia Dixon) is undeniably complex yet looks effortless. The lifts and spins make the performance a real spectacle, as do the efforts by the incredibly skilled band. The musical accompaniments provide a backdrop to the action without overpowering, the band’s contribution is unobtrusive but completely remarkable in the way in which it can evoke varying moods within the performance. What is particularly striking about TCMS is that it seems the majority of the college get involved in someway. The lighting, tech and stage crew should not be forgotten for helping to make the play go as seamlessly as possible. Minor slips, including set malfunctions were skillfully worked into the script by Denton, providing laughs rather than awkwardness. The sense that comes from a TCMS production is one of community- the symbiosis of many different groups, art team, tech team, front of house, cast and band working together to create something remarkable. It is clear that this musical has been well rehearsed, the cast is all stellar and the work that they have put in to their performances over the last couple of weeks has really shown. If you’re free this week, I would strongly recommend you to watch the musical- a chance to watch real talent and enjoyably spend a couple of hours.