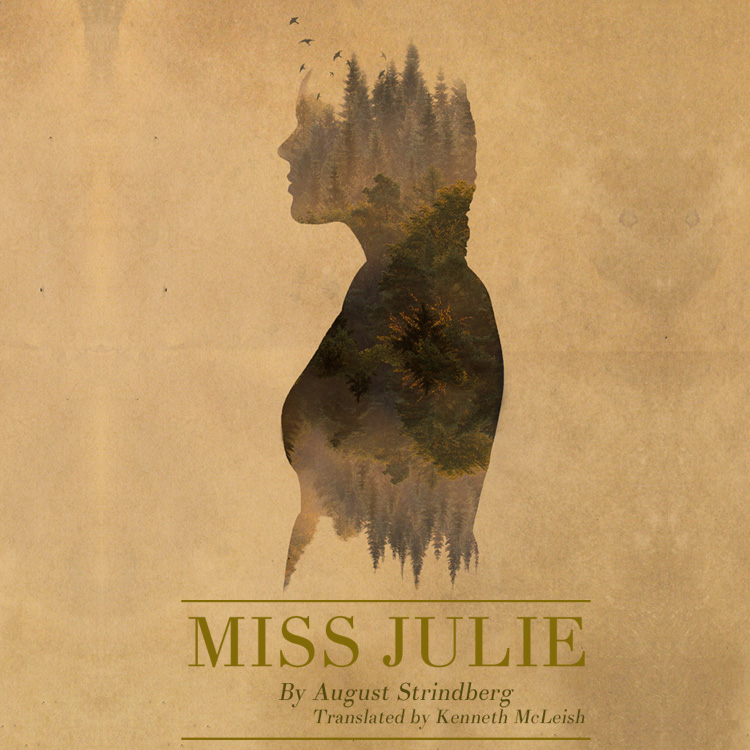 With a minimal cast who express the complexity of class and sexual conflict almost solely through dialogue, my first impression on reading August Strindberg’s Miss Julie was that any attempt to stage it would be highly challenging for both the actors and director. Pitch Productions’ decision to stage Miss Julie as their debut play is thus certainly an ambitious one, and whilst the production struggles at times to maintain the intensity and tension needed to truly embrace the extremity of class and gender colliding at full force with one another, its ability to leave the audience silenced and disturbed at its close is proof that director Isabelle Culkin and the actors grasped the tragic essence of the play, a highly commendable achievement on its own.

The set and lighting managed to perfectly balance the conventional setting of a nineteenth-century peasant kitchen with the eerie seductiveness of a Midsummer’s Eve. The simple yet comfortable domesticity created by Jessie Turner’s set design immediately permitted me to place myself in the play’s setting, and by not overcrowding the stage with objects or furniture the intimate interactions between the characters became the prime focus. Even more admirable was Caleb Bond’s handling of the lightning throughout the entire play. His ability to gradually alter the shade of lightning as the events of the play spiralled out of control, darkening at the climactic moment of the sexual union between Jean and Julie, and then brightening and dulling the light so as to create a dazed atmosphere for the approaching horrors of the realities of the next morning, revealed how deeply in touch Bond was with the thematic implications of the play. His manipulation of the lighting was subtle and yet evocative, an achievement that deserves high praise.

Luke Maskell (Jean) and Eleanor George (Kirstin) were able to immediately draw the audience in with a sense of true class equality in their quietly pleasant romance. The class struggle that defines Miss Julie requires a complete rupture of this sense of comfortable unity with the appearance of Julie on stage, and unfortunately the play didn’t express this strongly enough. Whilst Eliza Cummings-Cove (Julie) proved her talent as an actress in the final moments of the play as Julie suffers her tragic breakdown, she failed to bring the seductive and manipulative vibrancy to the character during the first half of the play. This prevented her from being a strong antagonistic force to the sly and contriving Jean, allowing him to dominate the stage rather than maintain a constant dualism with Julie. Maskell avoided letting this be too much of a detriment by maintaining a pride and erectness that captured the class bitterness of Jean. His subtle transitions between being completely manipulative and domineering over Julie, to his more introspective reflections on his true class status, permitted Maskell to prevent the audience from loosing sight of Miss Julie’s expression of tragic self-awareness manifested through the battle of seductive games and contrivance.

Culkin’s staging of the ensemble scene helped spur on this sense of bewitching seduction, enhancing the alluring mystery of the Midsummer’s Eve in which the conventional hierarchies of class and gender are being fatally undone. It was from this moment onwards that Cummings-Cove’s portrayal of Julie began to fall in sync with the play. Her completely exposed vulnerability in the latter scenes of the play allowed her to encapsulate the inescapable tragedy that has befallen Julie. It was from the moment when Julie brought out her pet bird that Culkin was able to fully direct the play towards the tragic, and it was clear that the actors seemed most comfortable and able to bring their characters to life in this dramatic state of mind. Whilst Kristin could have been left as a mere side-line figure, her sudden outburst upon hearing of Jean’s seduction of Julie contrasted greatly with the initial sense of ease created by her guarded aura, allowing George to be responsible for revealing how the consequences of Jean and Julie’s act would have profound consequences for all.

Pitch Productions should be praised for tackling such a difficult play for their debut performance, and whilst the production at times fails to attain the dynamic force and dramatic complexity needed to sustain the energy of Miss Julie, it is worth going to even just to appreciate the tragic power of the last moments of the play.