Review: She Loves Him, He Loves Her Not 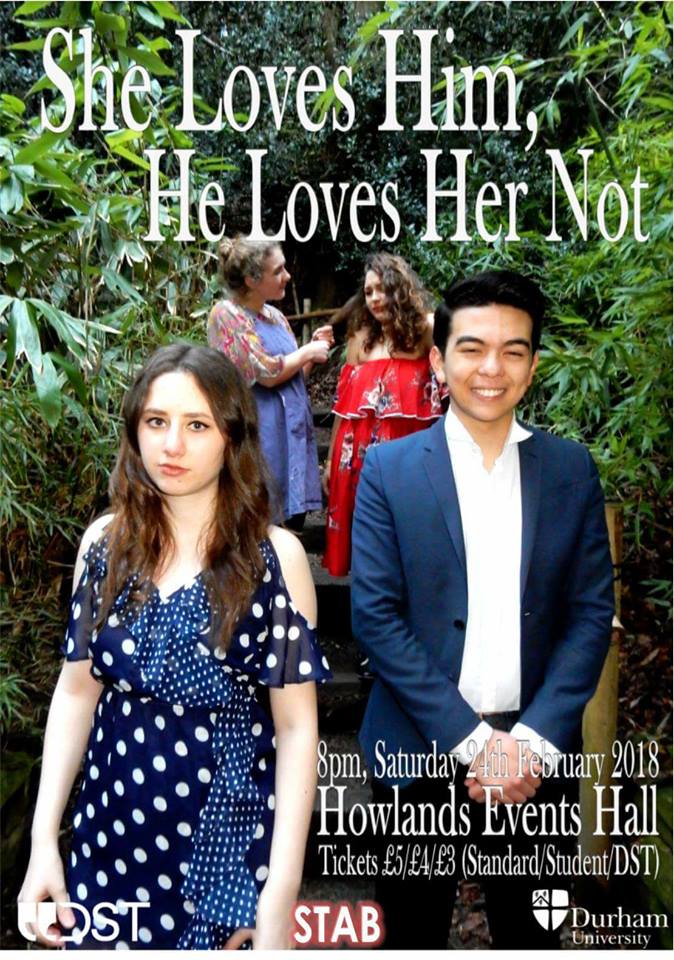 “…a hilariously bizarre play written as a commedia dell’arte…”

STAB’s depiction of Andrew Pinon’s She Loves Him, He Loves Her Not is a hilariously bizarre play written as a commedia dell’arte which features themes of love, family and, unexpectedly, pirates. Smeraldina has spent her entire life in love with her childhood friend Oratio. However, when she discovers his love is devoted only to the beautiful Isabella, Smeraldina is distraught and seeks the assistance of her Aunt Rosaletta and sister Columbina.

The use of minimal set and props paired with an intimate of audience space of just fifty seats was highly effective for this piece. This was solidified by frequent audience interaction which was at the forefront of the very first scene. The simple staging allowed for emphasis on the physical humour which was executed perfectly and an evident strength from the outset. Classic techniques such as slapstick humour and dramatic irony had the audience laughing throughout. All jokes where very well delivered with impeccable timing which really set the audience at ease and emphasised the light-hearted nature of this piece.

The cast consisted of twelve strong members who each provided a confident delivery of lines and physicality with clarity and precision. However, there seemed to be a lack of emphasis on the distinct physical characteristics of the comedia dell’arte characters which really would have elevated this piece. The cast as a whole worked together very well and seemed to feed off of each other’s energy throughout with hardly any moments of loss of characterisation. Special mention must go to Abbah Jackson as Oratio for his notably strong performance in Act 2. Abbah was particularly engaging as a performer and I felt his delivery of each scene to be compelling and highly realistic. Darcie Gomer must also be highlighted for her portrayal of Puncinella in which she maintained an impressively high energy throughout the show and always had the audience in fits of laughter with her excellent use of physical comedy.

Large dimmed stage lights were placed on the floor at the front of the performance space which initially created a good atmosphere. However, as the show progressed it became evident that due to the positioning of the lighting a lot of the dialogue and some crucial physical moments were delivered in darkness. At points it was hard to see what exactly was happening due to very odd shadowing. I also feel this piece could have been lifted by the presence of music as none was used at any point and the scene changes could have been made smoother.

Overall, STAB did a very good job of producing a hilarious show and adapted the original piece extremely well in order to meet the strengths of the company. All themes were very well portrayed and audience attention was captured throughout. I am looking forward to seeing STAB develop and hopefully put on many more diverse pieces in the future.