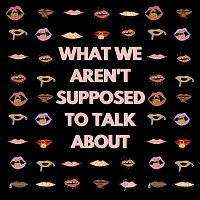 My Thursday evening involved flying tampons, Fleabag recreations, and powerfully funny student writing. I heard more about vaginas than I have in my entire life, and it was a hoot.

Thursday was the ‘Lips Don’t Lie Showcase’. The piece is an indispensable part of Pitch Productions’ week-long drama festival, ‘What We Aren’t Supposed To Talk About’—and it’s hilarious. But we’re not embarrassed into laughter. We don’t cringe like we usually do when subjected to fart jokes, jokes about sex, about genitalia or bodily fluids.

The taboo is often uncomfortable, but not this time—and yet, ‘Lips Don’t Lie’ isn’t funny because it’s controversial; it is the cast we have to thank. They stun with their repertoire of accents and their ability to transform into so many different characters in such little time. The scene transitions are short, lasting as long as it takes for cast members to move a few chairs about, but this is all the time it takes for the cast (Issy Flower, Will Bloor, Ellie Fidler, Darcy de Winter, Ellen Tapp and Lily Kattenhorn Black) to adopt new personalities and  mannerisms. Tapp manages this extremely well even within a scene. She is the manipulative partner in the final and most meaningful piece, ‘Stockholm’, which shows the male as victim of domestic abuse. Her phone voice and her angry, jealous one are so distinct that she would make us laugh if it weren’t for the subject matter.

Watching the production feels like participating in some sort of group therapy session, only without the awkward silences. Thoughts and feelings we’re all likely to have kept secret for years flood onto the stage. The show talks about first periods, about threesomes, domestic violence, vaginas, rape fantasies, not trusting our partner, cervical cancer, farting in public and about falling pregnant as a victim of rape.

Just as simple as the set design is the lighting. It’s a light electric blue and yellowed at the edges, so that the variety and dynamism created by the actors’ movements is accentuated by an easy colour change. The blue is especially fitting in ‘I am the most cold hearted son of a bitch you will ever meet’ (written by Issy Flower), where Kattenhorn Black worships a man’s blue eyes. This scene relies on her fantastic facial expressions and so good lighting is crucial. The lights are blue throughout and force us to focus in a show whose aim is to confront uncomfortable topics; at the same time the blue is fulfilling its renown for calm.

Flower, Bloor and Kattenhorn Black have an uncanny resemblance to Fleabag’s characters in every other moment of their reenactments. This is especially the case when Flower and Kattenhorn look to the audience in Fleabag’s notorious eyes-on-the-camera way. These moments fit into the showcase perfectly as other sketches use a similar technique. Bloor is perfectly casted here, changing between ex-boyfriend Will and ‘bus stop man’ with ease, and doing a fantastic job in Hugh Dennis’ role.

The main message of the play is that people can have very different attitudes to the world, sex and their body – and that’s OK. In ‘The Flood’ Flower’s legs are firmly pressed together as she talks, hesitantly at first, about ‘down there’; yet in ‘My Angry Vagina’ Fidler’s are spread as wide as they can go. She stands close to the audience, even sits on one of us, and forces another into the role of gynaecologist. Kattenhorn Black’s character in ‘Threesome’ has ‘a difficult relationship’ with sex and goes on ‘sexual work experience’ out of what seems like a sense of obligation; but in ‘My Angry Vagina’ Fidler’s persona is ‘hungry for depth… [and] chocolate’.

Thursday’s was a show with incredible acting and clever direction. The showcase reassures us that isn’t hypocritical to feel ashamed of our own bodies when we know for certain that our friend’s stretch marks are beautiful. It reminds us that it’s OK to be a feminist and not be interested in sex. It’s also OK to shave, and it’s no problem at all to feel like a ‘flower without the leaf’ when you’re hairless.