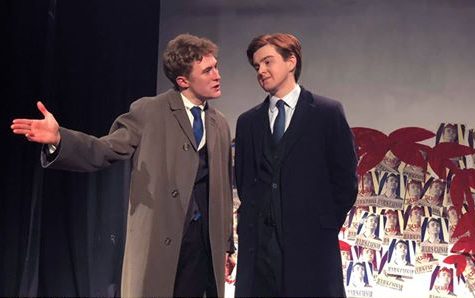 ‘This man is now become a God!’ Exclaims Cassisus to Brutus in the opening scenes of the play. Julius Caesar is a play in some part about power: how to get it, and who should have it, what to do with it once you have it – and, indeed, what power even is. For Brutus must in some way betray his character to obtain his power; he allows it to destroy the other relationships in his life, such as his bond with his wife, and even when has claimed power, cannot ever wield it as Caesar does. To borrow from Mad Men, one feels like telling Cassius ‘You had no right fill a man like that with ambition.’ A play like this requires bold figures to deliver forceful, rhetorical monologues; it is a play that shifts constantly from the intimate to the public and for any theatre company to attempt it is ambitious itself. Luckily, this performance, directed by Max Lindon, pulls it off.

The four major actors were well-cast and delivered four defined and nuanced performances. In the opening scenes between Cassius and Brutus, there was a good conflict between the frustrations of Cassius and the more measured, considerate Brutus. Antony was also well cast, giving a strong performance as somebody who begins as too confident in their power; who grieved passionately over Caesar’s body and then recovers to deliver the bold and rising speech at Caesar’s funeral and lead his forces to victory. Of all these roles Caesar is perhaps the least interesting character; nonetheless Zac Tiplady gave a strong performance as a solid statesman eventually outwitted. Indeed, the acting was overall the strongest aspect of the play. These characters all had clear personalities, as well as identities, which made the character arcs and plot easy to follow. The supporting cast were a little more interchangeable, but still delivered well.

In the ‘Director’s Note’, Lindon claims to have cast the play gender-blind, and although there are women playing traditionally male roles, the four major characters are all played by men. In a recent 2017 production at the Grosvenor Outdoor Theatre, several of these roles were played by woman, and there seemed to be several strong female actors in the cast. Portia and Calpurnia each performed well in their roles as pleading wives, but I would have liked to have seen a female actor take on one of the more powerful and challenging roles.

This issue seems to have been exacerbated by the choice of costumes. Costumes are always the hardest part of non-professional performances in that they are the hardest to craft cheaply; here, the male characters were all clad in suits that had enough difference between them to, if not exactly reinforce character, at least distinguish the players (my favorite was Anthony’s confidant and snappy blue suit). The female characters, on the other hand, all seemed to be wearing a variation of my school’s sixth-form dress code: dark skirts, blouses, suits, all mid-range enough to give the impression that these woman, striding about with the apparent rulers of Rome, were not powerful players in their own right, but undernourished civil servants of the sort you’d see in The Thick of It. To me, the nondescript costumes betrayed the power these women apparently seemed to wield.

Bizarrely, contemporary dance music was played at the start of the two halves, and yet at no point was these modern, urban messages reflected in any other aspect of the play. In the ‘Director’s Note’, Lindon encourages the audience to ‘draw parallels between the play and current affairs’ rather than he himself ‘imposing any one interpretation on them.’ That said, I think perhaps part of the role of student theatre is to demonstrate and experiment with the ideas and moods of the student generation: who are people rooting for in England? Perhaps it would have been interesting to underlay the play with undertones of Brexit, making Brutus’s conflict between what he perceives to be betraying his country and betraying his leader chime with Britain’s own conflicted identity.

In any case, this was a thoroughly enjoyable and well-executed production. The greatest tragedy I saw was the size of the audience; something like this, to me, deserved far greater numbers. It was powerful, moving and thoughtful and I would be especially excited for the company to produce more tragic or historical Shakespeare yet.