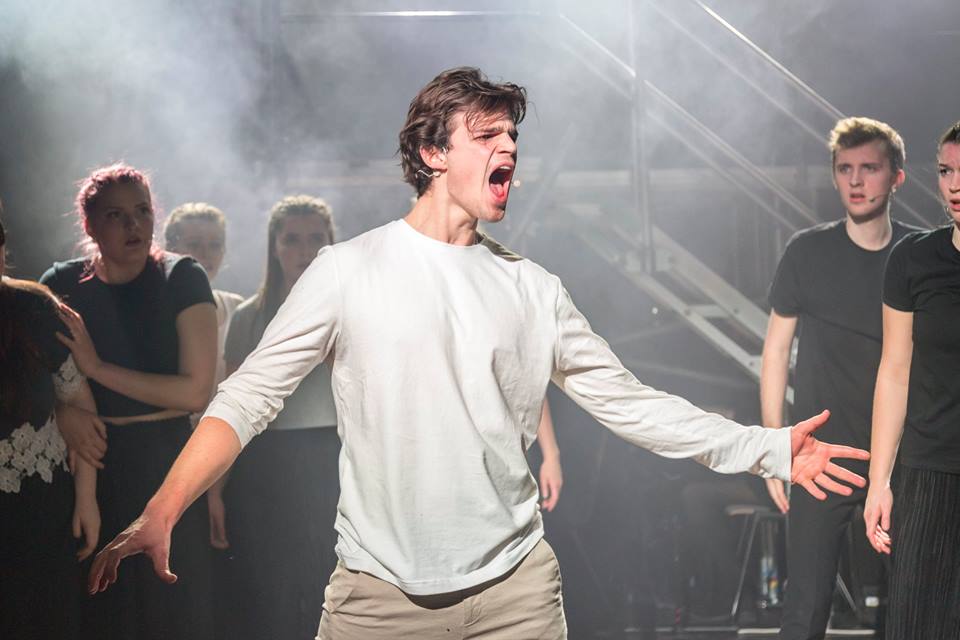 Castle Theatre Company presents their latest project, directed by Jennifer Baker, the Broadway classic Jesus Christ Superstar. An ambitious project for student theatre in itself, this project seems even more challenging as the first musical from Castle Theatre Company. Despite this, the production proves to be a high-energy performance packed with talent and is both fun and enjoyable.

The actors are well cast, with strong vocals from the leads – particularly Thomas Bracewell as Judas Iscariot, wowing the audience with numbers such as ‘Superstar’. The gentle performance of Naomi Cook as Mary Magdalene adds a sweet contrast to the powerful rock ballads of other characters; her performance of ‘I Don’t Know How to Love Him’ – accompanied by an acoustic guitar- adds a personal touch to an already emotional song. Praise should also be given to Jacob Freda as King Herod, who proves an audience favourite with his comedic and flamboyant portrayal.

Such a small cast means the chorus has a greater task in supporting the leads, which they do with great success. Their performance compliments the energy of the production perfectly, with strong vocals and vibrant choreography cementing the ambience of a scene, be it the aggression of the trial scene or the rejoice of ‘Hosanna’. Whilst sometimes it appears the complexity of the choreography leads to some stumbles, the dancing is well choreographed and executed.

The band performs well throughout the production, providing a good base for both the singing and choreography of the show; the guitars (James Orr and David Bullock) giving justice to the music of Andrew Lloyd Webber. Of course, special mention must go to the musical directors Ronan Burke and Tessa Bailey for bringing this together.

Having two differently levelled stages works well in providing interesting opportunities for direction and choreography. Arranging the chorus over both levels in the number ‘Simon Zealotes/Poor Jerusalem’ creates a sense of a much larger production in terms of both numbers and floor space. This second level of staging is even used in a symbolic sense to represent the journey and struggles of characters, such as placing Jesus above those begging for his help in ‘The Temple’ or showing Judas’ struggle to commit to his choices in ‘Damned For All Time/Blood Money’.

The technical management of the project provides another layer of depth to the production, particularly in the lighting, as both strobing effects and colour are used to match the beats and energies of the songs. However, there are sometimes some issues with the volume of actors’ microphones, which on occasion leads to some difficulty following the lyrics (and therefore events) of certain numbers.

Recreating a much-loved musical in a way which suits student theatre, Jesus Christ Superstar’s only drawback is in the too-fast-paced energy of the production and the simplicity of the costume design, lacking individuality and making the characters harder to identify. However, this doesn’t detract from the project being an outstanding success for Castle Theatre Company as its first musical. It leaves us in anticipation of the future of musical theatre within the company, I for one cannot wait to see what else they produce.