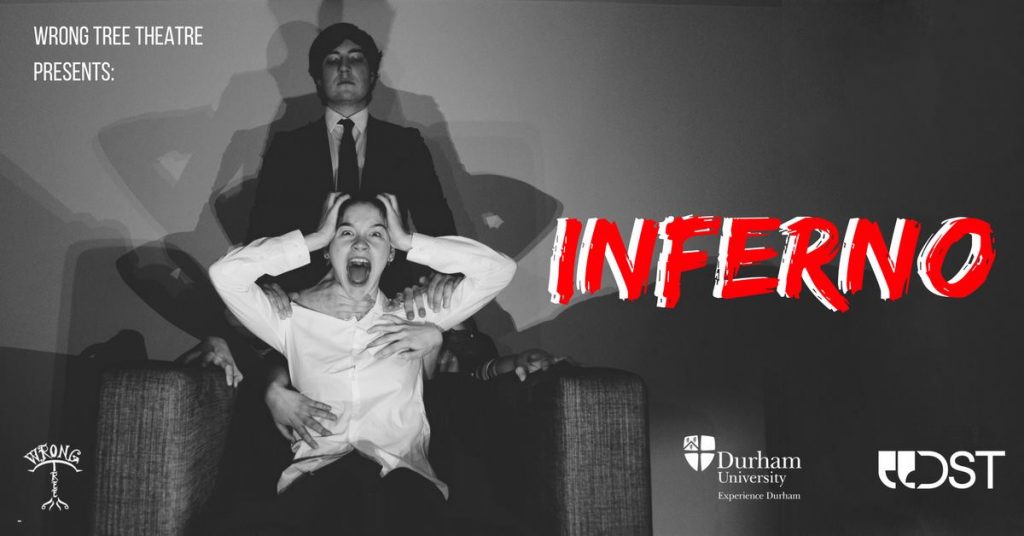 This creation by Wrong Tree Theatre draws on Dante’s Divine Comedy, as lawyer Bella is abducted by Lucifer and transported through the circles of hell, which, despite being depicted by Dante 8 centuries ago, are shown to still resonate pertinently with the sins of today’s society.

In this age of austerity, Lucifer’s ensemble is reduced to five, not seven deadly sins, although they are in no way wanting. Decked out in ripped rags and gaunt makeup, they captivate the audience with their contorted physicality, first spilling on to the stage through a trapped door like a plague of locusts; throughout, their mastery of mime and dance is spectacular and shocking.

Emily Winters’ original score is highly effective; the play opens with discordant yet moving electric strings, which recur throughout to reinforce the horror of the scenes you are witnessing. This gives moments of silence a particular significance, such as Bella’s sudden realisation that her presence in hell means she could in fact be dead, an instance moving for its stillness. Isabel McGrady offers a standout performance; her delivery is natural and effortless, at times making you forget you are watching an actress, quite the feat in such an overtly surreal production.

Using a deliberately minimalist backdrop of black curtains, each level of hell is distinguished entirely through variations in music, lighting and the impressive physicality of the ensemble of sins. Serene, seductive lighting and the fluid, sensual dancing of the ensemble are used to depict the realm of ‘lust’. In contrast, the circles of violence and anger are portrayed through a battle in a board meeting, a particularly impressive scene visually. The slow motion fighting is almost comedic, set to an unsettling reworking of ‘You are my sunshine’, with sudden relapses into a red lit stage where the sins’ bodies contort, reflecting flashes of rage.

In a particularly chilling scene the ensemble of sins adopt childish personas and transport us to ‘purtagory’ (as it is labelled by a ‘six year old’, whose innocent confusion is sinister), a place occupied by children who engage in incessant playground-esque games. Such a vision is reminiscent of Michael Boyd’s 2011 RSC production of Macbeth, which cast the three witches as young children hanging suspended above the forestage. As with Boyd, the use of childhood to display evil and eternal suffering is deeply sinister.

Moments of dark comedy provide necessary relief. This is highly effective in places, such as Lucifer’s complaint that ‘You give one girl an apple’ and it leads to the decline of your relationship with God. However, sometimes this comedy does feel out of place and more ametuer when it lacks a cultural undertone.

Lucifer’s comment that ‘Evolution stretches far but it doesn’t quite reach the bedroom’ is a lighthearted reminder that ethically, we are not as developed or distinct from Dante’s contemporaries as we may like to think, which director Henry Gould highlighted perfectly. However, his aims to create a ‘comparison of the classical moral values explored in the original “Inferno” and our contemporary relative morality’ could in places have been more nuanced; Bella’s disgust that those who have engaged in premarital sex are punished alongside sex offenders in the circle of lust is an obvious comment on how morality often differs vastly now; it did not need explanations such as ‘that makes no sense’ and comments on how ‘this is the twenty first century’, which slightly undermined the subtlety of the message.

However, overall Inferno was a powerful and immensely creative production. This is a masterclass in how to use physical theatre to depict the deepest human atrocities, which, as we are left overwhelmingly aware of, exist just as much on earth as they do in hell.

‘Inferno’ is on at 7.30pm, 1st-3rd February at the Assembly Rooms Theatre.