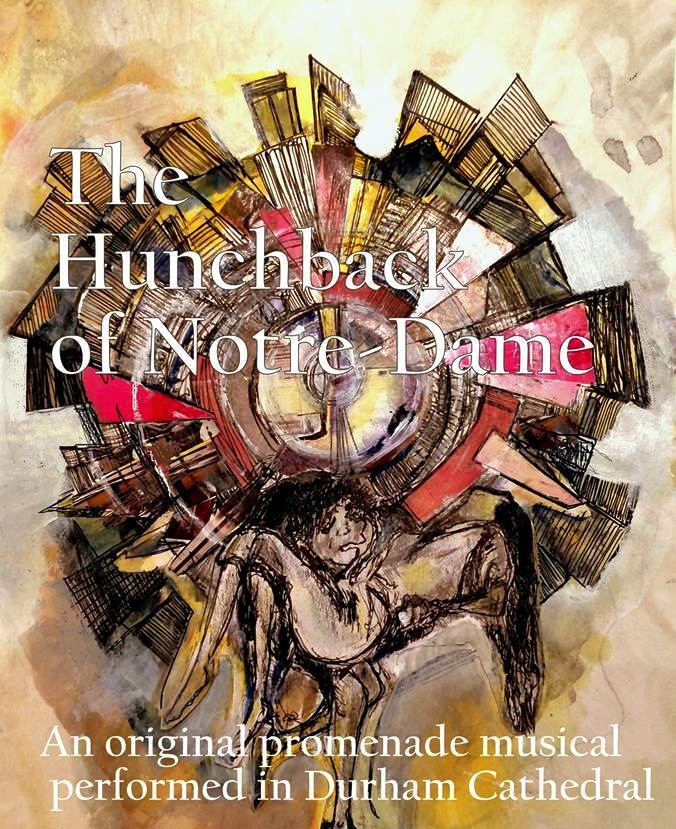 The Hunchback of Notre Dame is the most visually stunning student production I have ever seen, or am ever likely to see.

As one of the volunteers said before the show – ‘the dramatic architecture of Durham Cathedral can be used in different ways’. This certainly wasn’t an understatement. Going beyond fly-on-the-wall status the audience was whisked around rooms and cloisters as one of the rabble with cast members dispersed within to guide us on a tour of hallowed rooms that are rarely open to the public – the audience flowing with the undulations of the action.

The opening scene where we are told, in perhaps too enthusiastic a proclamation, that the show is about to begin wasn’t the most engaging. However when, a moment later, you are led into the cloister, ambient with carefully positioned lighting, and bustling with period-dressed cast members singing and dancing, it genuinely feels like being transported to another time. The disparity between the familiar cathedral and the transformed cloister was remarkable and, for that reason, this scene stands above the rest. Not least in the way the brightly lit cathedral entrance was juxtaposed by the long shadows of the cloister where the cast and audience’s breath comingled in the evening chill to add a smoky authenticity to the depicted streets of Paris.

This ambience was further heightened by the music of Jack Moreton which was sublime throughout – capturing the historical moment of the piece to a tee and, most importantly, manipulating the mood of the whole production. Despite the visual majesty, the senses were also overloaded with quality from every other angle to make the sensually pervasive production capture you no matter where you were stood and regardless of how much you could see (as shorter members of the audience clearly struggled). It must be said that the lyrics weren’t the strongest in the solo pieces, nor were the voices (although the echoed acoustics of the venue can’t have helped), but this slight criticism is made obsolete by the power of the music itself to play on the audience’s emotions. The call and response hysteria when Esmeralda is accused of murder is hectically brilliant and rouses the audience into a similar sense of panic and uncertainty.

There were a couple of slight sticking points within the show, but nothing that wasn’t overcome by the visuals. The cockney accent of all the commoners on the streets of Paris was understandable, albeit peculiar, and certain scenes did seem a little stuck together. Given the nature of the show, with the audience being constantly tossed from room to room, this was to be expected, and it was never really a problem. Indeed, it can probably be said that the story is a sub-plot to the visual extravagance for which designer Rosie Spence and Technical Director James Ryan deserve maximum credit for.

Another problematic, but ultimately humorous, scene is the market place. The hustle and bustle was wonderfully captured although the authenticity was a bit too much when the person who accompanied me got whisked off to buy a piece of St Paul’s rib and it took me the rest of the scene to find them again. In fact, one unsuspecting reveller got dragged off by three vagabonds for a haircut at one point. I didn’t see him again.

Despite being made uncomfortable by their in-your-face attitude. the cast as a whole did a great job in managing their parts while also coordinating the logistical nightmare of taking forty audience members with them at a time. The odd fact that the audience were split into two begs the question of how much of the story the separate groups missed, and in what ways we differently saw the action, as there were not two actors for each role. This makes a repeated viewing a tempting proposition, and perhaps explained the at times disjointed plot, but at £9 per student, for a performance lasting a little over an hour, the show is certainly a one-off experience.

Leo Mylonadis’ groundbreaking performance is visually and aurally spectacular. The only mild weakness is in its oral delivery. The script itself if beautiful in places, but the delivery was sometimes lacking. The Game of Thrones-esque dining hall blew me away in its intricately real layout, yet you couldn’t really hear what was being said. Also, despite a strong performance from Rob Collins as Frollo his tendency to continually put his hand to his mouth was distracting and distorted his words at times. His rapport with the excellent Jess Hof as his sister made up for this, however.

Ultimately, the performance was not only the most visually superior I have ever seen; it was also loaded with memorable moments. Lizzie McGhee’s mesmeric singing in the courtyard amid the dancers and lighting will live long in memory as will the sudden appearance of Sam McKay’s terrifying Quasimodo to whisk Esmeralda to the bell tower. Michelle Novellie’s prosthetics a surprising and effective addition to his part.

For whatever the performance lacked in delivery at times, the visuals and the music carried this performance and made it, without a shadow of a doubt, one of must-see performances of the year.