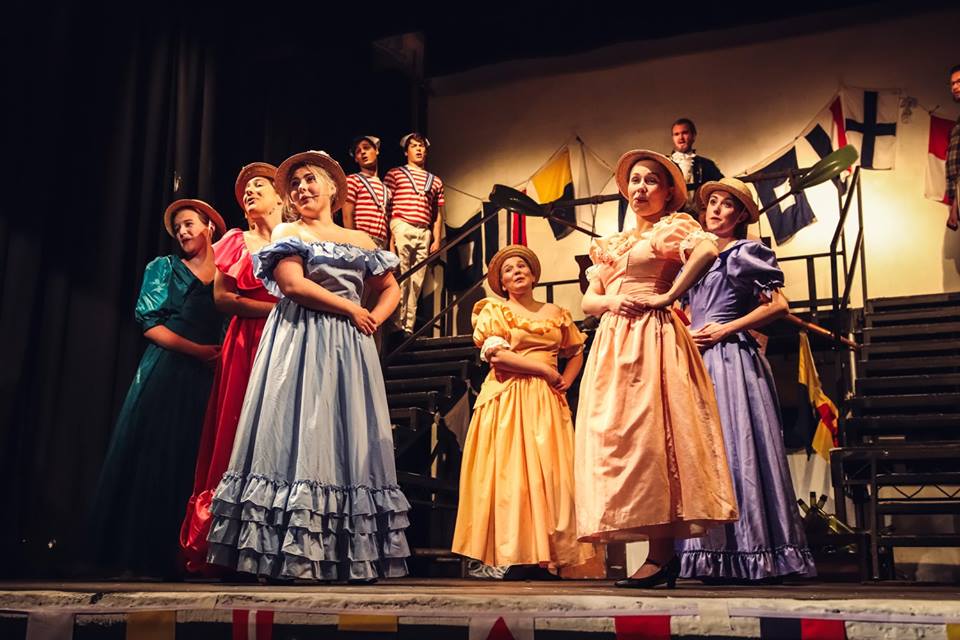 “…HMS Pinafore was so visually clear on stage.”

HMS Pinafore follows the love between sailor Ralph Rackstraw and the daughter of Captain Corcoran, Josephine. Whilst the main narrative is focused around them, the audience’s attention is drawn to every member of the cast and the roles they have to play, and in a sense the show was stolen from its main storyline. This opera truly was an ensemble piece, for you weren’t waiting for anyone but rather everyone was consistent and enjoyable.

Despite this, Catherine Bench’s performance as Little Buttercup was a standout from the offset, her voice faultless and was perhaps the most convincing within her role, her rapport with Henry Chapman’s Captain Corcoran being one of the comedic highlights of the production, with Chapman also giving in a wonderfully amusing performance through the use of facial expression and body language. Similarly, Cameron Gergett’s Dick Deadeye was suitably sly, and his over-the-top creepiness contrasted with humour of the rest of the show and provided a different kind of comedy.

Although there were individual highlights, the best performances were the chorus themselves, the sailors and the ‘sisters, cousins and aunts’. As a team, the synchronicity of the sailors’ choreography was some of the best I’ve seen in Durham and their performances provided most of the comedic aspects of the show, which really is a testament to the work put in and how well they worked as a chorus. Similarly, the recurring joke of the ‘sisters, cousins and aunts’ gained the biggest laughs consistently all evening and it was down to the vivacity of the female chorus’ performance.

There were still standout numbers however, with the chorus’ “We Sail the Ocean Blue” and later on, “Over the Bright Blue Sea”. Again, the ensemble pieces were some of the strongest of the production. Opening the show however, Catherine Bench’s “I’m Called Little Buttercup” was faultless and set the precedent for the rest of the performance.

Undoubtedly one of the main themes running through was social class, alongside authority in the wrong places. This was shown admirably through Joseph Porter and the switch of positions at the end, and whilst it was used mostly for comedic effect with apt delivery on everyone’s parts, the joke was used consistently enough to still make the audience think.

Alongside all this, the energy of the show was insatiable, not one moment felt tired and although the cast had been singing for over two hours by the end, their voices were just as consistent as they were at the start. The world of HMS Pinafore was so visually clear on stage, largely down to set design and costumes, and the show mirrored that.

There couldn’t be a more fitting show for the penultimate production of the Assembly Rooms Theatre this year (and next year), HMS Pinafore offers a consistently well-performed and incredibly well-produced show and really should be seen before it leaves Durham.

HMS Pinafore is on at 2.30pm, Saturday 16th June at the Assembly Rooms Theatre.