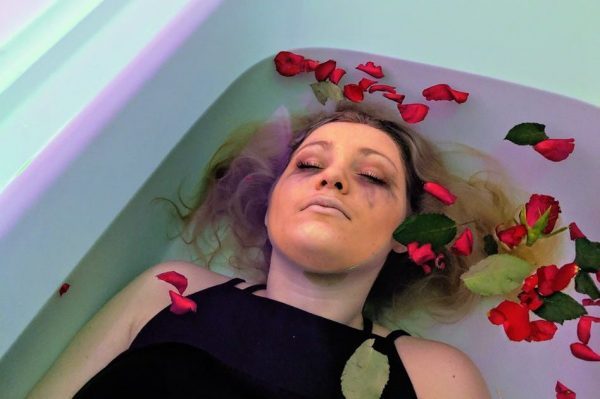 Shakespeare’s Hamlet, in all its complexity, ambiguity and history, is a play which presents countless problems to actors and directors alike, but DUCT’s new production elegantly works through these to create an excellent version of the classic work. Choosing to focus on and develop the themes of mental illness, the show both provides a barnstorming presentation of Shakespeare’s work and succeeds in adding sensitively to ongoing discourse over mental health.

The atmosphere of the piece is set by the sickly lighting and ominous soundscapes courtesy of Barnaby Fryer, and creates an ambiguous, unsettling space which perfectly complements the play. Making excellent use of the somewhat intimate City Theatre, the production is seamless, often long scene transitions being masked by the brooding soundtrack throughout.

Ginny Leigh as Hamlet truly is the star of the show, living up to the notoriously difficult role. From her first entry, she delivers an immediate emotional impact, visibly struggling to hold herself together, delivering the character’s soliloquies with great engagement and drive. Her greatest achievement is in the careful navigation of Hamlet’s ‘antic disposition’, managing to convince us of the harsh realities of Hamlet’s mental state. This emotional drive in her character quickly becomes the main force in the play and the narrative almost fades into the background.

Indeed, Leigh so excels in her role, that it is difficult for the other actors to match her drive and emotional energy. The rest of the cast give performances which verge on classically Shakespearean, while maintaining a distinctly modern tone. Only Ophelia (Amy Porter) succeeds in matching Hamlet’s power, her own development of mental illness a well-navigated parallel. Jude Wegerer as Laertes also gives a strongly emotive performance in his grief. Thomas Bracewell is elegantly pompous as Polonius, Harry Twining suitably brash as Claudius, with a nicely developed undertone of menace creeping in later on. Whilst John Duffett’s performance as the Ghost loses some of its impact in his scene with Hamlet, he leaves a bombastic impression. Rosencrantz and Guildenstern (played by Wegerer and Ariana van Biljion), presented as a creepy, inhuman doctor and nurse duo, are slightly cheapened by their moments of talking in unison, but still manage to lend a deliciously creepy tone.

This particular focus on Hamlet, sometimes at the expense of the other characters, is in part due to the cuts to the script. Director Gemma Macmillan-Fox, drawing from her own experiences with mental health, has taken as given that Hamlet is not ‘acting’ but is genuinely suffering with mental illness, and focused on this. While some might question the decision to try to diagnose Hamlet with schizoaffective disorder, it is what allows Leigh to give such a convincing and coherent performance. With this conceit, the play revolves around Hamlet’s condition and their consistent emotional drive takes over the plot.

Subsequently, in this version the play’s most powerful, stand-out scenes become those which demonstrate the immediate impact of mental illness on Hamlet’s loved ones. The explosive mania of the nunnery scene with Ophelia is perhaps the highlight of the play, in its shocking portrayal of how mental illness can lead people to hurt those they love most. Here, both Porter and Issy Flower as Gertrude have their greatest moments in their highly emotive portrayals, baring their hurt at Hamlet’s hands. Different angles are presented by Aaron Rozanski as Horatio, in his seemingly endless patience and support of Hamlet, and in Claudius and Polonius’ lack of understanding of mental health issues. The production favours these moments, thus allowing Macmillan-Fox’s chosen theme to be widely explored within the context of the play.

The show does begin to flag a little in the second half, though admittedly some of this will be down to Shakespeare’s text. After Ophelia’s death and funeral, a number of the characters seem to be suffering from emotional fatigue. The last scene too, while returning with some high moments of emotion, particularly in the shifting dynamics between Hamlet and Laertes, suffers from technical troubles in the fight. For me it lacks real emotional depth in the final moments of Gertrude and Horatio, giving a slightly unsatisfactory end to the piece. Thankfully, the strength of the earlier portions means the play leaves a forceful impression.

DUCT’s new version of Hamlet succeeds in breathing new life into Shakespeare’s classic text. The vision and direction are well-thought through, and woven carefully alongside the script, every aspect coming together for a lucid, impactful production. This is a production which truly stands out as both a superior Shakespearean reworking, and a successful theatrical exploration of mental health issues. It is definitely worth seeing for anyone, whether overfamiliar or completely new to Hamlet.