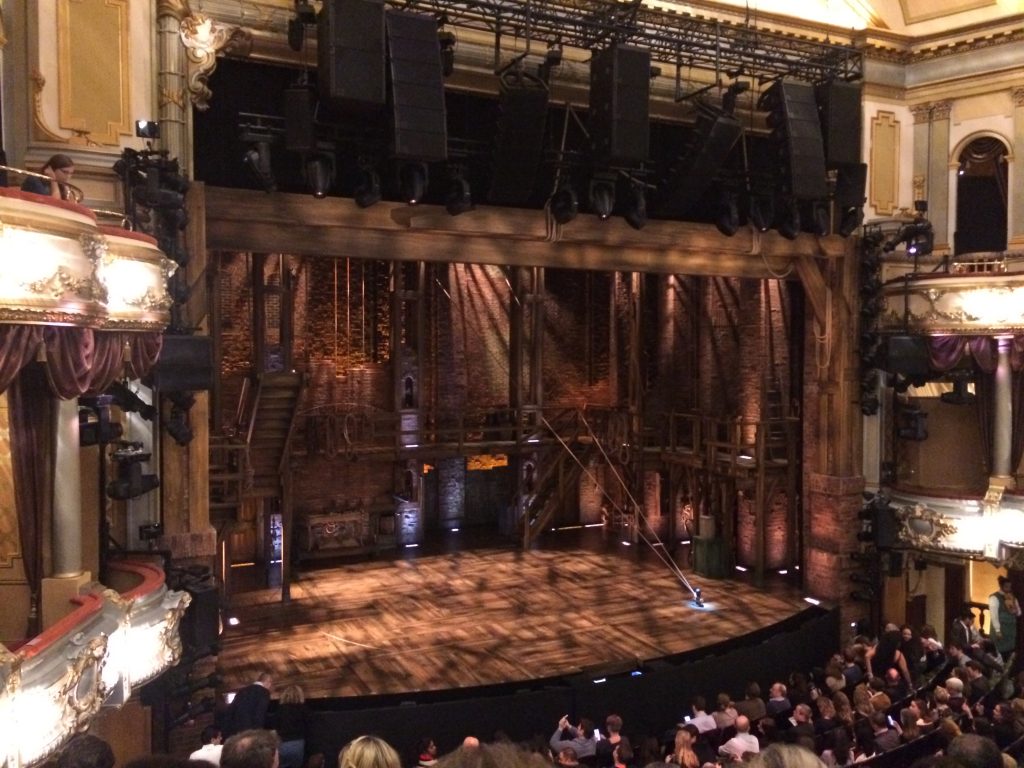 I don’t think I’ve ever seen a piece of musical theatre received so much like a concert. After every song there was thunderous applause, during some of the tracks there was a thorough sense of excitement and even cheers at certain lines, then at the end a thoroughly well-deserved standing ovation. There have been comments on the difference between American and British audiences in relation to the transfer of ‘Hamilton’ from Broadway to the West End, British audiences are supposedly more reserved, and save their praise until the end. It does seem though, that the unabashedly, proudly American nature of the musical forced enthusiasm out of even the most restrained audience members.

The music being something I’m sure most of the audience had listened to, I think there was more of an appreciation for the production itself. The set design was minimal and clever in its ability to convey the distance of the characters, in the use of the balcony the audience was able to sense the emotional impact the situation would have had on other characters further away, and we weren’t relegated to hearing their feelings through song later on (King George nodding along to ‘The Adams Administration’ simultaneously providing hilarity, but also knowledge for the audience that everyone else was in trouble).
The choreography was unparalleled by anything I’d seen, the dancers work constantly throughout to mirror the song being performed, then they become background actors, then they sometimes slip into more prominent roles. Without them, the show would lose much of its overall effect, for although you are watching the main actors, it is the dancers who are maintaining the synchronicity of the show and are those who make it appear a well-oiled machine.

Rachel John’s Angelica was incredible, she carried all the personality and vivacity that ‘Hamilton’ gives her, although her part was smaller than I anticipated, when she was on stage she dominated with her strong personality. Rachelle Ann Go’s Eliza however, in some places seemed overtly enthusiastic. Although she portrayed the emotional turmoil of Eliza in ‘Burn’ well and her voice was faultless throughout, sometimes it didn’t seem as if she inhabited the character as well as the other members of the cast, and in her scenes with John, was outshone. This could be down to me personally however, sometimes we tend to compare what we already know of to what has been put in front of us, and it may be down to her interpretation of the character.

Jason Pennycooke in the role of Lafayette and Jefferson was a delight in both of his portrayals, although they did seem to blend into one another in places, both being shown as quite camp. Still, as an audience member I often was drawn to him on stage to see his reactions and he often did not disappoint. As Hamilton, Ash Hunter provided a witty and likeable performance as the young Hamilton, but still managed to transition into the older and more problematic Hamilton relatively well. He played the younger Hamilton particularly adeptly however, with good comedic timing that mirrored Hamilton’s arrogance and his mistakes in Act Two were also heart-breaking for the audience, as Hunter’s performance made Hamilton easy to root for. For the audience, King George III (played by Michael Jibson) was a particular highlight, he managed to make the loss of British imperialism seem hilarious (which could be seen as alarming) and his short time on stage marked an uplift in tone which the audience always anticipated.

As a show, it is a transfer of the American original, but the West End interpretation just as effective over here as it is in the States. Although the audience may not be as familiar with American history, the genius of Lin Manuel-Miranda’s writing is received just as well, making the history accessible, but also recognising the ridiculous nature of these characters in places. A show which has an important underlying message about equality, manages to convey what could be seen as boring, in a thoroughly entertaining fashion, and quite frankly, needs to be seen.