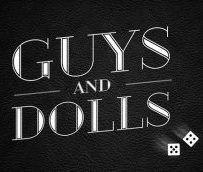 The lead couple of Sky (Ben Cartwright) and Sarah (Polly Beaumont) worked delightfully together, their dynamic evolved really well. Some romances in student productions can feel forced and uncomfortable to watch, but here it was acted to its full potential and it was wonderful to watch the couple come to their inevitable conclusion. Cartwright’s Sky was fun to watch, he carried the charm and charisma of the character with stage presence and was instantly likeable (despite his questionable occupation). Similarly, Beaumont made the uptight Sarah evolve into a more confident character, at the beginning she seemed shy within herself but Beaumont pulled off the character change admirably also.

As a comedic highlight, Danny Booth’s Nicely- Nicely Johnson was always someone to look forward to on stage and was the most consistent in his ability to make the audience laugh. Sometimes especially in the beginning, some of the jokes failed to land with quite a lot of the cast members. This was partially down to them settling into their roles, or the accents, but eventually everyone became more comfortable and the responses from the audience increased.

In some instances also, the music was too loud for the cast to be heard, and this did mean that the characters’ lines were not always audible for the audience. This did not impact the viewing of the musical mostly as it was easy to pick up what was going on later, but it did perhaps impact specific scenes. Also, in some numbers, the voices of the cast could not be heard and this was not down to them, for they all had strong voices, but it did lessen the impact of the songs in certain places.

Despite this, the music was phenomenal. The timing of the cast and the band was on point, they all worked together to highlight certain areas of the performance. The use of a live band was perfect for the musical, and most of numbers were flawless in their execution, even if sometimes the music interjecting into the speech often interrupted it and made the speech more difficult to comprehend. The music was upbeat, and the actors did a remarkable job of transitioning from speech into song at the drop of a hat. Beaumont’s voice however, was the particular musical standout of the evening. It was so powerful, and almost mirrored some of the Broadway recordings in its tone. It mixed well with Cartwright’s own voice, and did not overpower him in this sense, despite Beaumont’s voice being the strongest of the night.

Choreography was another good point of the show. The numbers with Adelaide and the girls were really well-synchronised, as were the Havana scenes and the gambling scene. The cast worked well together and utilised the stage well to imitate the atmosphere of the places. Although, some moves were slightly fumbled, the smaller stage did make it difficult. Overall though, the choreography performed was truly impressive.

An enthralling watch, and enjoyable from start to finish, ‘Guys and Doll’ is truly a play to prevent disappointment after the excitement of DDF.