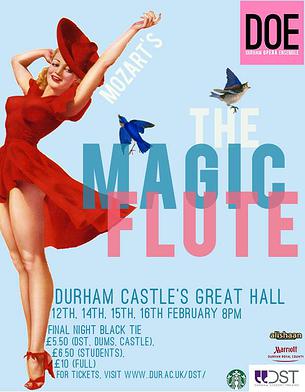 Durham Opera Ensemble’s production of Mozart’s well-known and well-loved The Magic Flute is set in post-war London. As the storm raged ominously outside, the house lights in Castle Great Hall dimmed to reveal a simple yet effective staging of four pillars and a starry night sky. Just in case one hadn’t quite grasped the setting, there was a newspaper lying on stage blaring the headline ‘HITLER DEAD’. The opera itself, underneath its overarching theme of a quest for love, wisdom and virtue, is full of Masonic references both in the plot and the music itself, which were carefully underplayed by rehashing the Freemason chorus as what seemed to be eccentric members of Sarastro’s Royal Institution or suchlike (they were wearing gowns, glasses, bow ties and colourful socks, anyway!)

The post-war setting meant that a lot of the male leads were in military uniform. Strangely, for the first half of the opera, the female cast were wearing what can only be described as underwear. I don’t quite see why this was, but otherwise the costumes were generally very imaginative and effective, with the aforementioned jazzy bow ties and some very convincing school uniform being highlights.

The opera was performed in English, in line with DOE’s recent push to demystify opera. The cast in general were particularly good at annunciating the words and so I could follow (mostly) what was being said without much trouble. This is actually quite rare – often professional operas have surtitles, even if it’s in English, just so one can follow the plot! This was not necessary in this case, despite the fact that the plot of this, one of Mozart’s best-loved operas, is somewhat long-winded. Understanding the plot was aided by the spoken dialogue in between numbers, acted very well by the cast, virtually without exception, expelling any clichés that may have been lingering about opera singers being unable to act!

The music was confidently led by the musical director, Michael Ash, albeit from behind a curtain. The extremely polished-sounding overture got the performance off to an encouraging start. The flute playing was very proficient too, which is just as well. The orchestra was generally well matched by the cast, who, with a few exceptions, projected their voices over the ensemble. At times, the lower voices did not carry so well and were lost in the wash of orchestra. Very occasionally, too, various singers in the dialogue scenes were not entirely together with the orchestra, which made for a somewhat uneasy atmosphere. However, this only happened once or twice.

The cast has been split in two, so as to allow cast members to rest their voices after each performance of this demanding opera. This set of principals (Cast 1) were in general pretty splendid – Charlotte La Thrope sang and acted the part of Pamina effortlessly and with great poise and emotion. Hugo Hymas, too, as Tamino, was unfaltering in both voice and character virtually throughout. Ben Craw, as Papageno, was enchanting. One truly empathised with his character, and he sang the part with confidence and skill.

A special mention must go to Ella Phillips (Queen of the Night) who tackled with aplomb the notoriously difficult coloratura aria, known in German as ‘Der Hölle Rache’, and more often referred to as “the Queen of the Night aria”. Her top notes were (mostly) bang in tune, and you could even hear some of the words (which is more than Dame Joan Sutherland herself often managed: words are not easy to make clear so high up in one’s range). Her aria in the first half, though, was not nearly as convincing – opening night nerves were very probably at play.

Both the ‘three Ladies’ and ‘three Boys’ brought life and energy with them whenever on stage (not that the performance was lacking in that anyway!) The Ladies were impeccably seductive and siren-like, and held varyingly convincing Cockney accents in their spoken dialogue. The three Boys were adorable, dressed in prep school uniform complete with uneven socks and untucked shirts, and were suitable lights at the end of the tunnel for both Pamina and Papageno, both of whom the Boys talk out of suicide. The twenty-five-strong chorus was impressive, and sang very well. They were also extremely patient, as they have so little to sing and do in this opera. Despite this, when on stage they all seemed engaged and committed: no one was noticed staring at the ceiling or into space.

In terms of the direction, there were some very imaginative and humourous touches by Anna Bailey; for example, the Magic Flute itself is first produced by the 1st Lady from down her corset, and handed to Tamino, who duly wipes it on his jacket. The little choreography the production contained was well-judged and performed with excellent comic timing – Monostatos and his cronies’ Magic Music Box dance was a particular highlight.

Overall, I very much enjoyed the performance. It is an extremely impressive production, encompassing virtuoso roles, a lot of acting, and a rather elaborate plot line. All of these hurdles were tackled with enthusiasm, professionalism and a sense of humour, by a very talented cast and production team.