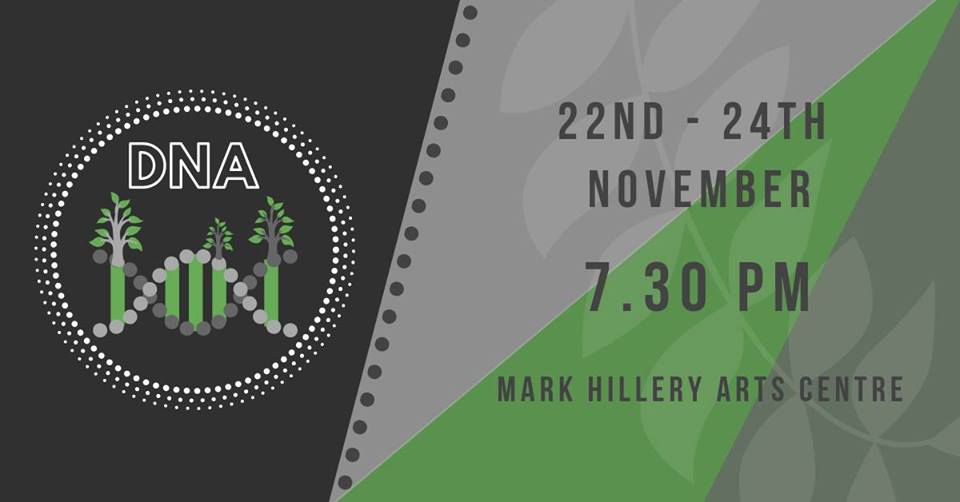 Collingwood Woodplayers’ performance of DNA was powerful, and a strong start to the year, engaging in a context we have all experienced; immersing us in the world of school and its power struggles all over again.

As aspects of the fatal accident were recounted, the lighting and sound were crucial to recalling the event. Later on, the clear lighting surrounding Adam (Peter Kissack) as he recounted his fall was significant in its evocation of his experience. The setting was also cleverly decorated with the remains of plastic packaging, detritus we immediately associate with Phil (Alexi Baramidze) and the fast food he’s constantly eating and discarding. The sound effects, however, were rendered more ineffectual in the scene when they weren’t carried out at an exact time in synchronization with the actions of the actors.

Only on stage for a brief time at the start, Dylan Hicks’ power as John Tate is well-balanced with his obvious fear in the early scenes, although why he is allowed to walk away while the others are dragged into the nightmare seems bizarre. Nevertheless, his angry bluster is replaced by the calculated dialogue of Phil, creating a clear juxtaposition between the leaders. Baramidze’s chilling portrayal of Phil was controlled and sinister, his silences speaking volumes. There is a fine line between a dumb silence and a weighted one, and Baramidze manages to carry this off; appearing lost in his own world rather than someone aware of his own silence. Even when forced to speak, the limited, monosyllabic dialogue carried a lot of weight.

Aime Page’s Leah had a nervous energy throughout which was enough to put you on edge in contrast to Phil’s deathly silence. While her chatter seems to focus on the inane to begin with, the segue into wider philosophical issues demonstrates both her intelligence and need for support, which is stunted by Phil’s lack of response. Her desperation for any reaction was poignant and full of pathos, so much so that her final scene came as a relief to those seeing her interactions with Phil as emotionally abusive. The disgust she shows is obvious in the face of Phil’s pathetic attempt to win her over.

The engagement between Louise Lovatt and Martin Docherty was very fluid and well-rehearsed. as was that between Sam Couper, Cameron Manning and Harry Stanbury, all of whom contribute to the uneasy reality of the play. Individually the characters may not be ruthless bullies, as Manning’s obvious fear demonstrated, but as a group they are capable of destruction. Stanbury’s occasional humorous interjections were enough to lift the mood, if only temporarily, in the manner of a classic tragedy, before we were forced once again to face the catastrophic circumstances the group had created for themselves. Cathy’s (Orla McElroy) silent psychopathy, although at first perhaps unrecognized and considered humorous, soon became more twisted as the play went on, and was incredibly executed. There was no question that she would rise to the top of the social hierarchy. The silent understanding between her and Phil was powerful as the long-suffering Leah watched on, her shock and dismay palpable.

Finally, Adam’s arrival was a definite surprise, and the audience is made uneasy by his obvious vulnerability, surrounded by those he once called friends. Phil’s faux-niceties added a saccharine edge that made the audience aware his being found alive does not mark the end of the play.

Despite a simplicity in the writing that makes the audience aware that the characters are merely schoolchildren, the Collingwood Woodplayers manage to manipulate this to create eerily disassociated characters and a shocking incident while maintaining the naivety and youth of Kelly’s scripted personas.

DNA is on at 7.30pm, 23rd-24th November at the Mark Hillary Arts Centre, Collingwood College.