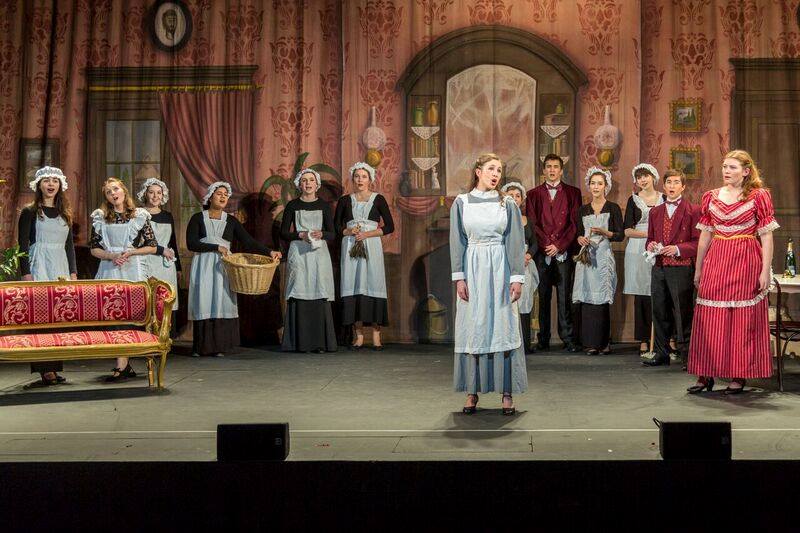 Durham Opera Ensemble’s production of Johann Strauss II’s operetta Die Fledermaus is one of grandeur and sensitivity. It tells the story of one Gabriel von Eisenstein (Max Halcox) who is being forced to go to jail for insulting a police officer, but instead evades jail for a lavish party being hosted by Prince Orlofsky (Hannah Thomson). Meanwhile, Rosalinde (Poppy Metherell) knows that he is not going to jail and decides to follow him in disguise. Adele (Hannah Ambrose), their maid, also feigns the excuse to be released from work so that she too can go to the ball disguised as Olga. After many frivolities and twists, the great farcical ends up joyfully in the end.

After the long and all-encompassing overture, the red curtain is finally raised to reveal a well-crafted set, accompanied by standard white lighting and filled with cast in an elaborate array of costumes. For me, the opening feels a little hesitant, and it takes a moment for the orchestra and cast to get the confidence they require to reach the energy maintained for the rest of the show.

Under the baton of Harry Lai, the orchestra carries the show with a high level of competency and are quickly able to adapt to the occasional slip from the cast. The solo woodwind parts offer interjections between cast lines are played beautifully by David Hedly (oboe) and Giselle Lee (principal flute). Overall, the orchestra deserve great commendations for breathing life into Strauss’ operetta.

One striking feature which stands out for me is the amount of effort that so clearly went into the costume design, for which we can commend costume and prop coordinator Ell Page for a creative and vast array of period-appropriate costumes. Similarly, the different sets which were produced for each of the three acts are incredibly apt and evoke the settings well. Evidently, a similar amount of effort went into the choreography, with effective and modest dancing from co-choreographers Emma Tsoi and Arabella Henderson. Although, at times, it does seem apparent that the routines could have had a little more rehearsal.

Tech directors Josh Gordon and Sarah Panek do an applaudable job in ensuring the tech ran smoothly, despite the occasional mic drop out, and the cast was mostly balanced. However, in some cases it is difficult to hear the cast over the orchestra’s full tutti passages and I do wonder if they would have benefited from also being mic’d.

The high energy of the performance is maintained throughout the whole performance, with some comical over-acting and humorous lines are delivered with great effect. For me, the highlight of the evening is the iconic “Champagne Song”, delivered with great humorous effect by the entire cast. My overall impression is that, despite the rare occasion, it is not often that Durham Opera Ensemble’s production falls short of serving great justice to the work and that, with just one night to go, it’s an unmissable opportunity.